Recent 2014 WHO study revealed that 13% of the adult’s world population is obesity-stricken and 39% are overweight.

It is much of a concern as longitudinal studies show that obese children tend to stay obese in adulthood and are more likely to suffer from non-communicable diseases – diabetes, cardiovascular disease etc.

What is fish oil?

Fish oil is an oil derived from the tissues of fish. It is a common source of omega 3-fatty acids.

The two fatty acids eicosapentaenoic acid (EPA) and docosahexaenoic acid (DHA) found in the ointo are known to be the precursor of eicosanoids (the component that can reduce inflammation).

Fishes are suspected to accumulate toxins by a process known as biomagnification (increase in toxic levels in tissues of organisms at the higher level of the food chain.

Due to this the government has issued eating guidelines that limit the consumption of certain predatory fish in pregnant women.

The omega 3-fatty acid has been found effective in treating hypertriglyceridemia (high triglyceride levels) and few studies also claim that its use can prevent heart strokes.

It has also been debated that cancer, anxiety and macular degeneration can be treated with its constant use but further studies need to verify them.

It also been debated that cancer, anxiety and macular degeneration can be treated with its constant use but further studies need to verify them.

Unlike predatory fishes, marine-freshwater fish are a rich source arachidonic acids. Species may vary in the amount of fatty acid from 0.7% - 15.5%.

Different organs of the same fish may have a different amount of fatty acid. It has been found that only consumption of salmonid (fatty fish) showed a significant increase in serum EPA + DHA. Hence extraction of oil from fish is necessary to claim the benefits of fish

1. Fish oil reduces the accumulation of fats in the body

PUFA induces synthesis of triglycerides (glycerol) from fatty acids (non-glucose source) in liver which prevents the release of fatty acids.

This is known as re-esterification. This decreases excess of fats from accumulating in the body. By doing this a balance in lipid and glucose is maintained.

What does this mean? This means that consumption of PUFA found in fish oil can decrease further deposit of fats around body and can also maintain the normal lipid and glucose levels.

It was found that administration of EPA suppressed the adipogenic synthesis factor ( a protein involved in deposition and accumulation of fats) and also enhanced the death (apoptosis) of the fat cells.

What does this means? This means that EPA of fish oil decreases the production of leptin levels, hence controlling the metabolism and hunger which can lead to obesity if not taken care.

Insulin resistance is when the cells in the body fail to react or respond to insulin activity. This affects glucose activity and increases fat accumulation.

Adiponectin is a protein which regulates glucose levels and fatty acid breakdown. It is secreted by adipose tissue into the plasma.

Fish oil is a rich source of eicosapentaenoic acid (EPA). In an animal study, adiponectin plasma level was corrected by the use of EPA.

This corrective action on adiponectin explains that EPA can reduce glucose breakdown and enhance glucose uptake from the breakdown of fatty acids.

This reflects the favorable effects of EPA on insulin resistance.

What does this means? This means that the incorporation of fish oil, help in reduction of resistance to insulin and hence prevents deposition of fatty acids in tissues.

A crossover study with 40 participants reflects that lipid profile abnormalities were controlled in a group given a mixture of garlic powder and fish oil for a month as compared to placebo group. 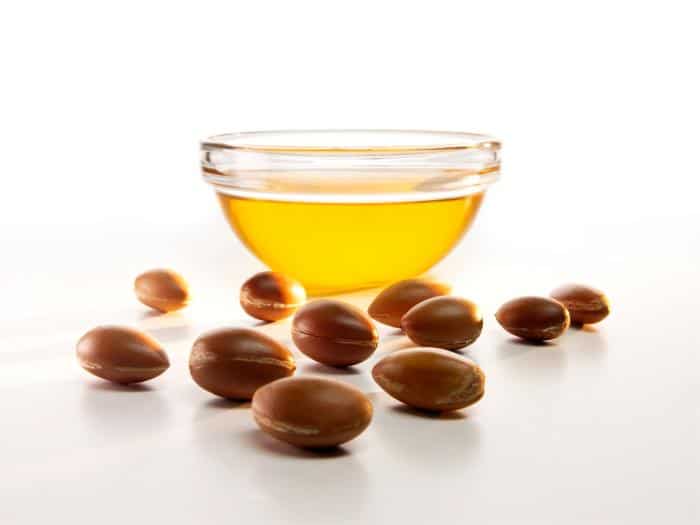 What is argan oil?

Argan oil is an oil extracted from the fruits of Argan tree (Argania spinosa).

It is one of the most important natural oils which has a long list of benefits Morocco people are enjoying the benefits of argan oil for centuries in almost every aspect of life from culinary to the industry.

The oil is rich in Vitamin E (tochopherol) and Vitamin A which provides anti-oxidant benefits. It also contains Omega-6 fatty acids, poly-phenols, and linoleic acid. These components provide head to toe benefits. It promotes healthy skin, nail, and hair.

Apart from beauty benefits it acts as Anti-inflammatory, anti-ageing, antioxidant and found to reduce risk factors of cardiovascular diseases and cancer.

After the world got enlightened by the life-saving benefits of the argan oil, its life got into danger.

Over exploitation of the slow growing argan trees lead Argan Forest to declare it a Biosphere Reserve by UNESCO in 1998.

Argan oil is rich in antioxidants and essential fatty acids which aid in weight loss.

In an animal study, argan oil treatment declined the elevated level of insulin resistance by its anti-oxidative properties.

These anti-oxidative properties can be attributed to tochopherol components in the oil.

Saponins found in argan oil are responsible for hypoglycemic activity by inhibiting the increase in serum blood glucose levels.

What does this mean? This means that the argan oil has the potential to reduce the insulin resistance which is itself a risk factor as well as an after effect of obesity.

A cross over study conducted on 37 human subjects to assess the improvement in Anti-oxidant, lipid status by Argan oil.

What does this means? This means that the argan oil successively reduced the triglycerides and total cholesterol values which ultimately reduced the risk of obesity.

There are few studies related to argan oil and adiposity.

But there are few groups of scientist that believe anti-oxidant properties of the oil due to the presence of tochopherol and polyphenols which inhibit low-density lipoprotein oxidation and enhance the reverse cholesterol transport in vivo.

What does this means? Argan oil contains antioxidants that can reduce fat deposition and assist in weight loss.

Argan oil vs. Fish Oil: Which is better for weight loss?

A study was published in the Metabolism Clinical and Experimental Journal performed on diet-induced obesity model which aimed to compare the action of fish oil and argan oil in the reduction of obesity.

It also brought a significant decrease in adiposity or fat tissue.

Though Argan oil feeding restored fasting blood sugar and lipid profile but fail to decrease accretion of fats and hence was not able to decrease adiposity.

Fish oil has wider availability as compared to argan oil and hence fish oil is available at a lower price than argan oil.

With clinical evidence, one can say fish oil is better than argan oil in the reduction of adiposity. However, Argan oil can prevent the risk factors to obesity like restoring insulin and cholesterol homeostasis.

Both have a different mechanism of action against obesity. It would be interesting to see which of them causes better weight loss in humans.

Given the ease of availability and comparatively affordable cost of fish oil supplements, it is recommended to opt for fish oil over argan oil for weight loss.

READ THIS NEXT -
4 Types Of Vinegar That Help In Weight Loss
Cinnamon Oil and Benefits
Why Manuka Honey is Good for Gingivitis
Sugar & Obesity: Does Quitting Sugar Guarantee Weight Loss?
Benefits of Wheatgrass in Menstruation
What is Cinnamon & It's Nutrition Facts