The endothelium is the tissue that lines the blood vessels and lymphatic vessels.

It lines the whole vascular system (constitutes heart, blood and blood vessels like veins &arteries) and controls the movement or exchange of materials from the bloodstream to the surrounding tissues.

The main functions of the endothelium are to maintain the blood flow or the circulation of nutrients, regulate blood clots, assist in immune response and dilate or constrict blood vessels.

It results in inflammation, reduced vasodilation (widening of the vessels to decrease blood pressure), blood clotting and atherosclerosis (thickening of arterial walls due to plaque accumulation).

The endothelial dysfunction is associated with the development of most cardiovascular diseases, such as hypertension, strokes, coronary artery diseases, heart failure, diabetes, kidney failure, infections, etc.

The primary cause of this dysfunction is the oxidative stress which results in an imbalance of nitric oxide (NO).

It is crucial for maintaining the endothelial signaling and thus, cardiovascular health.

The factors that may be responsible for the production of oxidative stress and in turn injury to the endothelial cells are obesity, smoking, microbial infections, lack of sleep, aging, exposure to pollutants from the air, diabetes, high cholesterol intake, etc.

The above factors need to be taken care of to avoid the endothelial dysfunction and thus, prevent the development of associated diseases.

Maintaining a healthy lifestyle such as by avoiding smoking, being physically active or taking a balanced diet, is the key to prevention.

However, medicinal treatment is also available for endothelial dysfunction.

There are many different types of drugs such as antioxidant agent, anti-diabetic, cholesterol-lowering drug (statin), Nitric Oxide production enhancing drugs, etc. are used for the treatment.

The drawback of these drugs is that they have some side effects like nausea, weight gain, kidney damage, liver damage, muscle problems, and many other such disadvantages.

Cocoa is the powder of the fermented and roasted cocoa seeds.

Cocoa has been used in traditional medicine for the treatment of a cough, fever, diarrhea, rheumatism, malaria, etc.

These nutrients and primarily the flavonoids of cocoa give it the properties of therapeutic importance.

Some of these properties are antioxidant, anti-inflammatory, antiseptic, antidepressant, antidiabetic, etc.

Because of these properties, cocoa finds medicinal use in several diseases like infections, cardiovascular disorders, diabetes, obesity, neurodegenerative disorders, cancer, and many other such health problems. [2] [3] 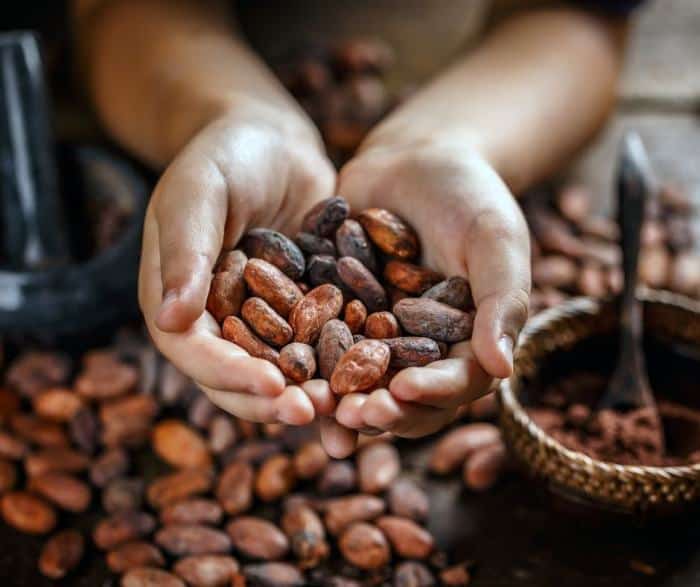 The high polyphenol (flavonoids) content of cocoa has great potential for cardiovascular problems.

It is known to benefit in the endothelial dysfunction through many mechanisms, including antioxidant, increasing vasodilation, reducing inflammation, etc. [4]

The damage of vascular endothelium by overproduction of reactive oxygen species (ROS) by various risk factors (smoking, obesity, diabetes, etc.) is the root of endothelial dysfunction.

The ROS inactivate the nitric oxide (NO) and reduce their bioavailability which leads an impaired endothelial function and risk of cardiovascular diseases. [5]

Plant flavonoids are known to reduce this oxidative stress by their antioxidant mechanisms and protect from vascular damage. [6]

Cocoa flavanols in dietary amounts increase the NO production and thus, improve the endothelial function. [7]

The cocoa flavanol, epicatechin has been found to upregulate the enzyme, endothelial nitric oxide synthase (involved in the synthesis of NO).

It results in an increased production of nitric oxide (NO) and an improved endothelial function. [8]

Cocoa flavanols have also been found to decrease the oxidative stress by reducing superoxide anion production in the vascular system and thus, establishing NO balance. [9]

In a study, consumption of chocolate (cocoa) could decrease the oxidative stress induced by diabetes and could protect significantly against the endothelial dysfunction.[10]

In a study on prehypertensive subjects, the chocolate administration increased the nitric oxide (NO) levels in the blood and thus, decreased the blood pressure of the subjects significantly. [11]

The increase of NO levels by cocoa epicatechin results in the relaxation of blood vessel walls (vasorelaxation) and thus lowers the blood pressure in hypertension.[12]

There is an inevitable link between endothelial dysfunction and arterial stiffness.

The stiffness in arteries is predominantly associated with the process of atherosclerosis (plaque deposition in the arteries) initiated by the endothelial damage, besides age.

Arterial stiffness results in impairment of the pressure of the blood flow in the arteries and increases the risk of hypertension, stroke, coronary artery disease, kidney failure, etc. [13]

Cocoa consumption has been found to decrease the atherogenic factors, i.e., the factors that are involved in plaque deposition such as lipids, monocytes, etc.

It improves vascular health and reduces the risk of associated cardiovascular diseases. [14]

In a study, daily consumption of cocoa-rich chocolate showed a significant decrease in arterial stiffness index and associated parameters like pulse wave velocity.

It demonstrates the protective effect of cocoa on the vascular system. [15]

In a study on overweight individuals, cocoa consumption substantially decreased the arterial stiffness and boosted the blood flow in the arteries. [16]

In the cases of age-dependent arterial stiffness as well cocoa intake is advantageous.

Cocoa flavanols reduce the arterial stiffness in the elderly and improve the parameters of stiffness such as blood pressure, pulse wave velocity, etc. to improve the vascular function.[17]

Damage to the endothelial cells promotes the process of inflammation in the vascular system and, in turn, causes atherosclerosis which increases the risk of cardiovascular diseases like coronary artery disease.

The cocoa flavanols have been found to decrease the expression of the inflammation mediators like TNF-α, IL-1, and IL-6. [20]

In a study, cocoa intake could lower the adherence capacity of the adhesion molecules like leukocytes (involved in the progression of atherosclerosis) in overweight subjects.

It resulted in an improved endothelial function. [21]

Cocoa consumption has also been shown to effectively reduce the adhesion molecules in the blood of hypercholesterolemic women.

It indicates the prevention of atherosclerosis and an improved endothelial function in the subjects. [22]

In the case of endothelial dysfunction induced by preeclampsia (hypertension during pregnancy), the cocoa extract was found to attenuate the inflammation by inhibiting the inflammatory mediators like IL-6 and sVCAM-1. [23]

What does it Mean? It means the intake of cocoa can lower the vascular inflammation associated with the endothelial dysfunction. The cocoa flavanols have anti-inflammatory activity, and they inhibit adhesion and expression of various inflammatory mediators and thus, improve the endothelial function.

There is no stipulation of the dosage of cocoa for the treatment of endothelial dysfunction.

However, many studies have achieved the desired benefits within the dietary intake of cocoa or dark chocolate in about 20-50g per day.

These amounts have been efficacious in improving the vascular function and protecting from cardiovascular diseases.[24] [25]

Cocoa can be consumed as a dark chocolate bar.

Cocoa powder can be added to milk or other healthy beverages. It can be used in bakery items which are healthier, i.e. do not contain refined flour or large amounts of sugar.

The cocoa products with more than 60%natural cocoa give the best results. It is also better to consume unsweetened cocoa or dark chocolate.

In the dietary amounts, cocoa or dark chocolate consumption is deemed harmless. However, some precautionary measures need to be taken as it contains some potentially harmful compounds like caffeine.

1. An allergy may be caused by cocoa or dark chocolate consumption

People who are prone to food allergies can have allergic reactions upon cocoa consumption.

2. Cocoa’s large dose can cause anxiety

If cocoa is consumed in excess, the large amounts of caffeine may trigger anxiety disorders in the consumer.

3. Cocoa may have Interactions with certain Drugs

The caffeine content of cocoa has the potential to interact with some drugs such as those used in the treatment of asthma, depression, heart disorders, etc.

It can interfere with drug metabolism and decrease its effectiveness.

4. A Migraine Headache may be Triggered by Cocoa intake

Consuming cocoa or dark chocolate in excess can trigger a migraine headache in some susceptible individuals. It occurs due to the presence of a natural chemical, tyramine in cocoa.

5. Cocoa can cause Kidney Stones

Cocoa has a blood-thinning activity. Therefore, its large amounts raise the risk of bleeding and bruising in the people with bleeding disorders and those on blood-thinning medicines.

7. Cocoa consumption should be stopped prior to surgery

Cocoa can interfere with the blood clotting process and blood sugar levels during surgery. Therefore, its intake must be stopped at least two weeks before surgery.

The caffeine content of cocoa can intensify the symptoms of IBD (inflammatory bowel disease) such as diarrhea if it is consumed in large amounts.

It may also impede the function of the food tube and aggravate GERD (gastroesophageal reflux disease).

9. Excessive cocoa intake is not suitable for heart and diabetes patients

The high caffeine content in cocoa poses the risk of irregular heartbeat and high blood pressure. Therefore, people with heart diseases should not avoid too much of cocoa.

Blood sugar levels may also be elevated by cocoa (especially if it is sweetened), and therefore, diabetes patients should avoid cocoa.

10. Pregnant and breastfeeding women should not take cocoa in large amounts

The high caffeine content in cocoa elevates the risk of miscarriage, premature delivery or low birth weight in pregnant women.

In breastfeeding women, high caffeine through mother’s milk can result in gastric disorders in the infant.

Cocoa is a rather delectable natural alternative for endothelial dysfunction.

It has a wide range of activity in ameliorating the endothelial damage and dysfunction.

Cocoa restores the balance of the very important molecule for vascular function, i.e. nitric oxide (NO) through its antioxidant activity.

Moreover, it lowers the inflammation and other factors involved in the progression of atherosclerosis.

It also helps in reducing the arterial stiffness.

These activities of cocoa are very effective in improving the endothelial function and preventing the development of various diseases associated with a dysfunctional endothelium.

A regular dietary consumption of cocoa is not only an efficacious but also a delicious way of preventing cardiovascular and other related diseases.