They include bacteria, fungi, virus, and some protozoa. Some microbes are useful for mankind while others cause harm. Microbes are present everywhere around us, in the air, water, and soil.

The human body consists of diverse microbes in different parts of the body which are useful for health.

However, if they increase in number, or microbes from outside enter the body, they can cause illness and infections.

Anti-microbial agents inhibit the growth of microbes or kill them, particularly those, which are parasitic (harmful) in nature.

Thus they protect the body from diseases and infections.

The human body is susceptible to microbial invasion all the time.

Therefore, it is important to use substances that have antimicrobial activity as they can prevent diseases.

In the case of infections, antimicrobial agents can be used to treat the microbial invasion.

It is obtained from the white meat (kernel) of a mature coconut. The unrefined version is known as Virgin coconut oil.

These fatty acids and their monoglycerides exhibit anti-microbial behavior.

Thus coconut oil is also used as a component to develop an anti-microbial skin treatment aid.

Coconut oil offers the following advantages as an anti-microbial agent 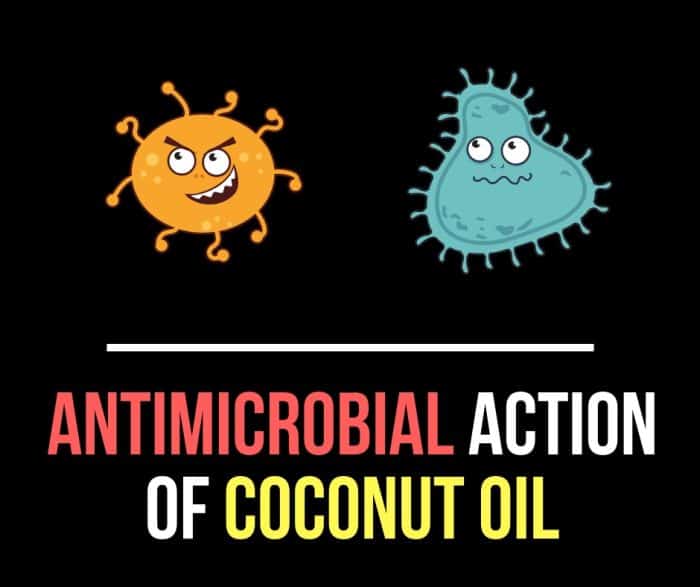 1. It is anti-bacterial in nature

Bacteria are single-celled microbes and highly abundant in nature. They are responsible for many infections and diseases.

Coconut oil is bactericidal against a broad species of bacteria. This is mainly because of lauric acid, capric acid.

Capric acid and Lauric acid break down into their monoglyceride forms- monocaprin and monolaurin, respectively. These fatty acids disrupt the cell membrane and the cytoplasm of the bacteria.

On the other hand, palmitic acid and myristic acid in coconut oil inhibit Gram-negative bacteria, which have thin cell walls but are more resistant to antibiotics.

Clostridium difficile is a bacteria that causes intestinal infections, diarrhea, and colitis. In a study published in the Journal of Medicinal Food, lauric acid was shown to have an inhibitory effect on the growth of C. difficile.

Journal of Antimicrobial Agents and Chemotherapy reports that lauric acid is also bactericidal against the bacteria Helicobacter pylori that causes peptic ulcers and gastritis.

The bacterium Propionibacterium acnes is the cause of acne with inflammation. In a study, lauric acid found abundantly in coconut oil, demonstrated strong anti-bacterial properties against this bacterium.

In another study, the bacteria Clostridium perfringens, which is responsible for food poisoning was inhibited by the fatty acids lauric acid, myristic acid, capric acid, oleic acid, and caprylic acid, all of which are found in coconut oil.

As reported by The Journal of Agricultural and Food Chemistry, monocaprin and monolaurin extracted from coconut oil are bactericidal against Listeria monocytogenes that cause food infections.

In addition to these, lauric acid has been proved as an effective anti-bacterial agent, showing bactericidal activities against many bacteria that cause oral infections like, Streptococcus mutans, Porphyromonas gingivalis, Aggregatibacter actinomycetemcomitans, S. sanguis, S. gordonii, Fusobacterium nucleatum.

In further studies, anti-bacterial activity against Streptococcus mutans was showed by monocaprin, while the activity of Streptococcus aureus was inhibited by lauric acid and capric acid.

In a clinical trial, 26 people with Atopic dermatitis were treated with Virgin coconut oil and Virgin olive oil, wherein coconut oil was found to be inhibitory against S. aureus, a bacterium that causes skin infections in dermatitis.

Coconut oil contains various fatty acids that are inhibitory towards many bacterial species and help in preventing bacterial infections.

2. It has anti-viral properties

Viruses are microorganisms that are infectious in nature. They live and replicate in living cells and are responsible for causing deadly diseases. They are quite difficult to treat.

Some viral membranes are lipid-coated and consist of lipids and phospholipids. For example, in visna virus, Cytomegalovirus (CMV), Epsteinbarr virus, influenza virus, leukemia virus, pneumono virus, and hepatitis C virus, cell walls are made of lipids.

The monoglycerides in coconut oil, monolaurin and monocaprin dissolve the lipid envelopes of viruses, thereby disrupting their membrane.

They also prevent viral replication inside the body and inhibit their binding to the host cells.

In a study, monocaprin and lauric acid, found in coconut oil showed maximum virucidal activity amongst all lipids, against Herpes Simplex Virus (HSV), that causes cold sores on face and genitals.

The fungus is a microbe that includes yeast, mold, mildew, and mushrooms. Some of the fungi are harmful and pathogenic in nature.

These species of yeast can cause candidiasis, an infection in mouth, throat, vagina or other body parts.

In a study, monocaprin, a monoglyceride of capric acid, found in coconut oil, showed inhibitory action against the yeast Candida albicans.

According to the Journal of Antimicrobial Agents and Chemotherapy, this fungicidal action of coconut oil against Candida albicans is due to the presence of capric acid and lauric acid in it.

Microsporum gypseum is a fungus that causes skin infections in mammals. In a study, it was reported that capric acid found in coconut oil inhibits the growth of this fungus.

Coconut oil was also used to prepare monoacylglycerols that inhibited the spore germination and growth of Aspergillus niger, a fungus that causes infection.

The dosage is highly dependent on the health condition of the particular individual. Thus, it is important to consult with a medical professional to determine the correct dosage.

For daily health benefits, 1-2 teaspoons of coconut oil per day for consumption is safe or one can include it in diet.

Coconut oil is edible and can also be applied topically, 1-2 times daily, depending on the type of microbial infection.

It can be used as a supplement for a particular health condition. This will reduce dependence on commercial drugs that have side effects.

For topical application, it can be incorporated in creams, lotions, soaps, shampoos, bathing oil, and ointments.

It can be used as cooking oil and substituted for any other oil.

Always seek assistance from a doctor before starting the use of coconut oil, as it can interfere with the working of certain drugs.

Always use pure and organic products that are free from contamination and preservatives. Virgin coconut oil, which is less refined and not subjected to chemical treatments, is best suited.

If applying topically, perform a patch test to determine possible allergies to coconut oil, if any.

If one is including coconut oil in the diet, moderate usage is preferred as it contains saturated fats. A large number of saturated fatty acids can disrupt the normal lipid profile in the body.

Pregnant and breastfeeding women should consult with a doctor before using coconut oil.

Coconut oil is an excellent anti-microbial agent. It contains many saturated fats that are inhibitory towards the growth of several species of bacteria, fungi, and viruses.

It is entirely safe for use and has no adverse effects. Allergies from coconut oil are exceedingly rare. It is non-toxic in nature and provides multiple health benefits to the body.

READ THIS NEXT -
What is Cinnamon & It's Nutrition Facts
Be Aware Of The Interaction Between Goji Berries And Warfarin
Kelp is an Effective Herbal Supplement for Thyroid Disorders
How Cocoa Can Make Your Skin Youthful!
10 Proven Health Benefits of Kelp
Olive vs. Argan Oil : Which is Better for Heart Health? [Fact Based]