Pharyngitis is a common condition today.

Blame it on the pollution, seasonal changes or the infection itself! Not to confuse this with the common cold or flu, pharyngitis is the swelling of the “pharynx”. Pharynx can be considered as the back of the throat, present between the tonsils and the voice box (larynx).

Pharyngitis involves the swelling of the pharynx. The causes of this condition mostly include the group A streptococcus bacteria, especially Streptococcus pyogenes, which first attach to and eventually invade the cells of our body, thereby infecting them.

However, in some cases, bacterial diseases such as chlamydia and gonorrhea can also result in a sore throat.

One can conclude that they are suffering from pharyngitis, if, along with a sore throat, they have the fever, headaches, painful joints, swollen glands in the neck and in some cases, even skin rashes.

While a common cold or flu can be treated with the help of antiviral medicines, there are antibiotics too, that can help tackle the infection.

But, are medicines the only resort? For those unwilling to take the road to recovery that involves allopathy, there is some good news!

A honey can be a boon for alleviating pharyngitis as well as the symptoms concerned with it.

This honey is called “Manuka honey”.  It is produced from the nectar of the flowers belonging to the Manuka plant (which can be in the form of a tree or a shrub; the scientific name being Leptospermum scoparium). These plants are found in New Zealand and some parts of Australia.

Manuka honey is considered as a medical grade honey because of its tremendous advantages. Be it anti-inflammatory, antioxidant, healing potential or even anti-ulcer properties.

5 Benefits of Manuka Honey for Pharyngitis

However, diverting our focus on to pharyngitis, Manuka honey has proved to be beneficial many aspects. Let’s see how it deals with the condition independently!

The honey exhibits antimicrobial activity because of hydrogen peroxide, which is present in it at a concentration of about 20%.  Honey can act as a bacteriostatic (meaning that it inhibits the activity of bacteria) and it can also be bactericidal (killing the bacteria) at different concentrations.

These anti-bacterial properties occur because of the high sugar content of the honey. Since the concentration of solute is higher in the honey (as Manuka honey is very viscous) than the solute concentration in bacteria, the water in the bacteria is drawn out, thereby limiting the growth of bacteria.

Manuka honey has a pH between 3 and 4.5, it is low and hence making it hard for most microorganisms are unable to survive.

Honey consists of a compound called “hydrogen peroxide” which gives them their antimicrobial property. This compound steals electrons from the membranes of the bacteria and thereby damaging their structure.

However, Manuka honey may have the hydrogen peroxide production blocked due to several factors such as the presence of an enzyme called “catalase”. Yet, its viscosity and pH are enough to fight against any pathogen present.

Pharyngitis includes symptoms including sore, irritable throat and is caused by Streptococcus group A bacteria (Streptococcus pyogenes).  In a study, Manuka honey was tested for its efficacy against this bacterium.

Biofilms (films made by the bacteria adhering to each other) were found to be invaded by Manuka honey. The bacteria were unable to adhere to the surface of the cells on which they were multiplying, as well as to each other. Cell death was also reported.

There is a protein in their body, which is known as “fibronectin”. This protein facilitates the adherence of other proteins to the membranes of human tissue. Manuka honey was found to prevent the attachment of Streptococcus pyogenes to fibrinogen.

Manuka honey also prevents the attachment of Streptococcus pyogenes to the human skin cells. It prevents the invasion of these cells by the bacterium.

What does this mean? Manuka honey has a massive impact on the causative organism of pharyngitis, which is “Streptococcus pyogenes”. It acts against the bacteria by preventing its adhesion and invasion inside the human cells and tissues. 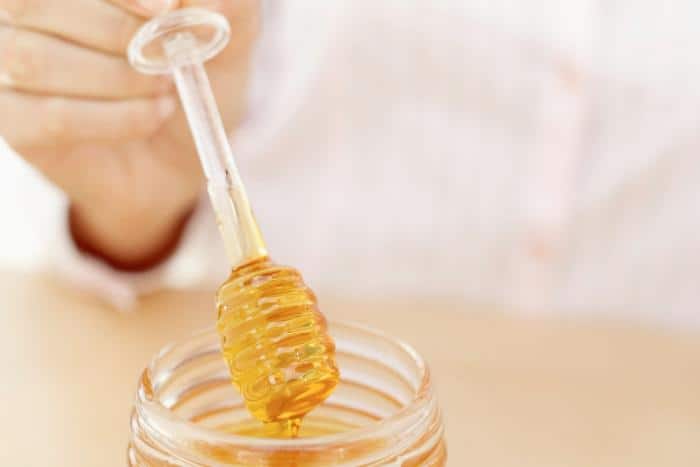 2. It has anti-inflammatory property

Our body has proteins in the body known as “prostaglandins” which are involved in the inflammation process. They signal the cells of the immune system to accumulate at the site of injury or infection. Natural honey was observed to reduce prostaglandin levels in humans, so does Manuka honey.

Manuka honey also reduces the production of proteins such as plasma tumor necrosis factor-α, interleukin-1β and interleukin-6 which all contribute to inflammation.

When compared to a medicine called “diphenhydramine”, which is used to decrease the inflammation of the throat in order to relieve the symptoms, honey was found to be more efficient in reducing the frequency of a cough.

However, honey consists of “antioxidants” which stabilize the free radicals so that they do not inflict damage onto the body cells. These antioxidants were “phenolic compounds”( a class of chemical compounds, mostly aromatic), flavonoids (provide pigments to plants), some enzymes, peptides and organic acids.

A study also concluded that dark honey-based syrups helped in the alleviation of cough in children.  Manuka honey is also a dark-coloured honey.

What does this mean? Manuka honey helps in the prevention of sore throat by acting on the inflammation an irritation associated with it.

3. It Benefits In Tonsilitis

In cases of acute pharyngitis, there are times when the tonsils also get involved and inflamed. This condition is known as tonsillitis. But there is nothing to worry about. This does not mean that one has to be scared, thinking that they have two conditions to deal with. Manuka honey proved to be useful.

Manuka honey prevents the inflammation of the tonsils. It has an anti-inflammatory effect. Inflammation in the body usually occurs via various pathways. One of such pathways is known as the “toll-like receptor pathway”.

Manuka honey is known to act on this pathway.

Manuka honey also reduces oxidative stress, as well as the infiltration of the cells that contribute to their production.

Phenols and flavonoids hence are not the only ways through which Manuka honey alleviates sore throat.

Sometimes, tonsillitis may also lead to pain in the abdomen due to the excessive amount of load on the muscles (as we use our muscles while we cough as in involuntary action).

Manuka honey aids this pain by helping in the improvement of digestion. It also keeps the gastrointestinal tract free of bacteria, keeping further infections at bay.

A study published in “International Journal of Pediatric Otorhinolaryngology”, 2014, it was reported that Manuka honey helps in providing relief from post tonsillectomy pain.

The time taken for a relief from the pain was found to be less in case of Manuka honey. Healing was also quick.  This study proves the fact the Manuka honey has a positive effect on the pain that occurs in the tonsils.

What does this mean? When due to pharyngitis, tonsils also get involved, under pain and inflammation, Manuka honey contributes to the healing and prevents spreading of further infections.

4. It Benefits In Sinusitis

When pharyngitis affects the throat and tonsils, it is also capable of affecting the surrounding areas, such as the sinuses.

A study evaluated the efficacy of Manuka honey against chronic rhinosinusitis. It was observed that nasal irrigation and topical application of Manuka honey can help manage the condition.

In an animal model, when Manuka honey was applied to the respiratory mucosa of the animal, there was no inflammation or gross change in the tissues, indicating that Manuka honey was safe for use on the given tissues.

Manuka honey is also a preferred antibacterial agent, which, as mentioned earlier, prevents the growth of microorganisms by providing low pH, and also due to the presence of a compound called “methylglyoxal” and “hydrogen peroxide” which have a bactericidal effect.

What does this mean? Manuka honey is capable of fighting against sinusitis without inflicting damage on to the tissues on which it is used.

Along with these benefits, Manuka honey also improves the working of the immune system of our body.

A study published in “Cytokine” in 2003 reported that honey is capable of stimulating the production of inflammatory cytokines (which are proteins secreted from the cells, responsible for bringing about the inflammatory reaction in order to ward off the infection). These functions can also help in tissue repairing and healing.

Manuka honey consists of 2 proteins: apisimin (secreted by the glands of honey bees) and arabinogalactan proteins which help in the production of a substance called TNF-α (tumor necrosis factor-α) which stimulates the cells of the immune system to bring about the suitable reaction, such as inflammation.

Manuka honey has been found to produce antibodies as a result of a primary or secondary immune response (when the body is exposed to the same antigen for the second time).

Since due to a chronic infection, the immune system might get weak, the person can get more prone to cancer. Polyphenols such as chrysin and apigenin provide an anti-proliferative property to the honey which prevents the formation an growth of the tumors.

What does this mean? Manuka honey helps in fighting the infection already prevalent and further prevents the occurrence of other infections due to the lost immunity. It builds up the immune system and stimulates its cells to act as and when required.

One can use Manuka honey as a remedy to pharyngitis, however, some aspects regarding safety and protection must not be forgotten.

One must ensure that the honey is properly sterilized and is not adulterated. Some people might be allergic to honey or the components present in it. Some people are even allergic to the pollen found in the honey.

Clostridium botulinum is a bacterium that is present in the environment and may have spores in the dust, air or soil and even in the raw agricultural products. If consumed by infants, it can result in a condition known as “infant botulism”, which can cause muscle weakness or breathing problems.

One can also consume it along with lukewarm water to give a soothing effect.

Manuka honey not only helps pharyngitis, it also helps to tackle the spread of the infection that can result in tonsillitis and sinusitis. It can soothe a sore throat, relieve pain by reducing inflammation and also prevent oxidative damage. It also boosts immunity. It is like an all-in-one package!