Nutritional deficiencies or Malnutrition is caused by imbalances in nutrient and energy uptake. [1] [2] [3] [4] [5]

Excess of nutrients causes conditions like obesity, cancer, diabetes and heart diseases. On the other hand, insufficient nutrients cause undernutrition leading to protein, vitamin and mineral deficiencies.

Malnutrition cases are usually seen in children and women of reproductive ages. It is prevalent in developing countries due to social and economic factors.

The symptoms depend on the deficiency diseases of a particular nutrient. Some common deficiencies include

The deficiency can also be caused by poor absorption of nutrients or inability of the body to utilize the nutrients.

Intake and absorption of nutrients can also be hampered by an excess of another nutrient, medications or other factors.

Certain physical factors like poor dental health, difficulty in swallowing and loss of appetite can also lead to malnutrition.

The simplest cure is to increase the intake of deficient nutrients or balance the number of nutrients through diet and supplements.

After diagnosing the disease, one can include foods rich in a particular nutrient.

Spirulina is a very nutrient-rich food that can be used to treat malnutrition. Numerous studies report improvements in health and nutrient levels after Spirulina consumption. [6]

Spirulina is a unicellular blue-green microalga that grows in both fresh and salt water. It has been used by generations for its nutritional and therapeutic purposes.

Nowadays it is being cultivated for commercial use and available as a dietary supplement. Some commonly grown species include Spirulina platensis, Spirulina Maxima, and Spirulina fusiforms.

This composition varies slightly depending on the place and environment in which Spirulina is cultured. [7]

Following are the reasons why Spirulina is an excellent supplement to combat nutritional issues. 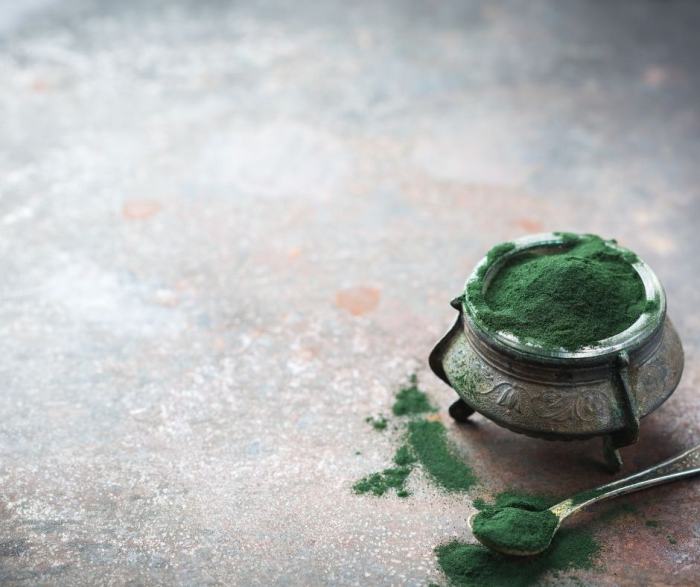 1. It Improves the Overall Nutritional Status

Spirulina is full of proteins, vitamins, and minerals. Therefore, it helps in enhancing the overall quality of nutrition in individuals.

A study was conducted where 16 children were given 10g Spirulina daily, in addition to the local diet. Z-score (statistical parameter to determine nutritional levels) corresponding to weight-for-age and weight-for-height showed a considerable increase.

This implies improving the nutritional status of undernourished children with Spirulina treatment. [8]

Children who were given Spirulina showed better nutritional condition after the study, and it was inferred that Spirulina is an effective food supplement. [9]

Spirulina was also shown to increase the nutritional quality of HIV patients. [10] Apart from this, several studies conducted demonstrate the efficacy of Spirulina in improving the nutritional parameters in different parts of the world. [11] [12] [13]

What does this Mean? Studies prove the positive effects of Spirulina on nutrition levels.

2. It is Rich in Proteins

The body breaks down the protein from the diet into amino acids and uses them to produce functional proteins for performing biochemical and metabolic functions in the body.

The Journal of the Serbian Chemical Society reports that Spirulina contains 55-70% protein, which is highest for any natural food. [14]

Also, the protein obtained from Spirulina is easily digested and absorbed by the body. [15]

Some amino acids cannot be synthesized by the body like lysine, leucine, isoleucine, methionine, phenylalanine, threonine, valine and tryptophan.

These are called essential amino acids and have to be obtained from the diet.

Spirulina provides all these 8 essential amino acids to the body. [16]

Spirulina contains more protein that many foods which are considered protein-rich. Its protein levels are higher than nuts, legumes, meat, and whole grains. [17]

The protein from meat contains animal fats and increases cholesterol. This adverse effect is not found in Spirulina.

It also has much more usable protein compared to milk, chicken, fish, beef, and soybeans.[18]

In a study conducted on burn patients, Spirulina treatment leads to an increase in the nutritional proteins in the blood.

Burn patients are susceptible to malnutrition and health deterioration due to the risk of infection and burnt body parts.

The study was conducted on 40 burn patients for 20 days who were given different concentrations of Spirulina depending on their age.

The results indicated an increase in albumin, total proteins and other proteins. [19]

Another research published in the International Journal of Pediatrics on 50 undernourished children studies the effect of giving 10 g Spirulina supplement.

The results show improved nutritional status and increased levels of total proteins and albumin in children who received this supplement in addition to the local diet.

This change was not observed in the group who were not given this supplement. [20]

What does this Mean? Spirulina is an excellent protein source and can be used to treat protein malnutrition.

Spirulina contains high amounts of beta-carotene (precursor to Vitamin A). Deficiency of Vitamin A can cause eye disorders and also lead to blindness.

One gram of Spirulina meets daily Vitamin A requirement for an adult. [21]

Studies have also shown that β-carotene, obtained from natural sources has greater bioavailability than those which are chemically synthesized.

This means it can be efficiently utilized by the body for its benefits. [22] [23]

A study published in the Journal of Nutritional Science states that 228 children who were given 2g and 4g Spirulina for 10 weeks reported that the β-carotene levels in serum significantly increased in comparison with the children who were not given Spirulina.

The Vitamin A stored in the body was also elevated in proportion to the amount of Spirulina given. Therefore, Spirulina was considered a good source of Vitamin A. [24]

Spirulina is also known to contain tocopherols (Vitamin E) in an active state, in addition to Vitamin K and Vitamin B-12. [25] [26]

What does this Mean? Spirulina provides various types of vitamins to the body and can be used to combat vitamin deficiencies.

4. It is a Storehouse of Minerals

A study published in the International Journal of Current Microbiology and Applied Sciences proves that it is rich in iron, selenium, and manganese. [28]

Spirulina is considered a vital and natural source of iron. Iron deficiency is common in children, older people, and women of childbearing age and causes anemia.

10g of Spirulina provides 55% of the daily recommended dosage of iron. [29]

Also, Iron obtained from Spirulina has greater bioavailability than wheat, beef, and other iron supplements. Due to this it can be more easily utilized by the body. [30] [31]

A study conducted on 40 elderly individuals of age 50 years or more, who were given Spirulina supplementation for 3 months reported increased hemoglobin values and improved immunity in the individuals. [32]

Spirulina is also abundant in calcium and phosphorus. The levels of these minerals in Spirulina are similar to that in milk and beneficial for bone health.

High availability of calcium from Spirulina ensures its easy absorption. [33]

What does this Mean? The high amounts of minerals in Spirulina make it an important source and supplement to prevent and deal with mineral scarcity and disorders in the body.

5. It Comprises of Essential Fatty Acids

Fat is required by the body to maintain healthy skin, eyes, and brain. The presence of fats enables efficient vitamin absorption by the body.

Fat deficiency may hamper these processes.

About 18% of Spirulina consists of essential fatty acids, which are required by the body.[36]

It is also considered a good source of gamma-linolenic acid (GLA), which performs essential functions in the body.

What does this Mean? Spirulina provides the body with essential lipids.

6. It has Several other Benefits that can help in Reversing Malnutrition

Some other significant advantages of using Spirulina for malnutrition are:

It is suitable for vegetarians and vegans and can provide enough protein which they cannot obtain from meat.

It also has more protein content than soybeans and peanuts which are the most common vegetarian protein sources. [40]

Spirulina is easily digested by the body and absorbed efficiently in both raw and dried forms, as it is devoid of cellulose wall, which is harder to digest.

Thus, it can be used to treat malnutrition arising from poor digestion and absorption.

It is perfectly safe to use and has no adverse effects on the body. Allergies from Spirulina are exceedingly rare.

Spirulina can be grown locally in developing or underdeveloped countries where malnutrition is quite common. It grows easily and provides a high yield.

What does this Mean? Spirulina offers many health benefits, is very favorable for cultivation and very safe for use.

Spirulina is a storehouse of several nutrients and therefore, an excellent nutritional supplement.

It is very efficient in combating malnutrition while preventing and treating various deficiency diseases.

It is rich in proteins, vitamins, minerals, carbohydrates, and essential lipids. It provides the body with healthy nourishment. It can be added to the diet and taken as a food supplement.