Nowadays, due to lifestyle changes, intake of processed foods and genetics, the occurrence of inflammatory bowel disease has become very common.

While some are affected with Crohn’s disease, a more common prevalence is that of ulcerative colitis.

Ulcerative colitis is a disease of the colon, which is the largest part of the large intestine. It is characterized by ulcers (or open sores).

These ulcers are painful wounds which may bleed and also produce mucus as well as pus.

The mucosa or the inner lining of the large intestine tends to get red and swollen. The most severely affected of all parts is the rectal area.

If the lining of the colon is damaged, it may begin to cause bloody diarrhea.

It causes a lot of discomforts, painful bowels, and lethargy.

To treat this, some options are available.

They include steroids, anti-inflammatory drugs and in worse cases, surgery.

However, wheatgrass can help in some ways and can also help in treating the various symptoms of inflammatory bowel disease and also it’s symptoms.

Wheatgrass is the cotyledons of the plant Triticumaestivum. It is enriched with many beneficial components such as chlorophyll, vitamins A, E, C, K, minerals such as magnesium, iron, calcium, and phosphorus.

It is also full of fibre.

These help in keeping the heart healthy.

Clinical trials have proven that wheatgrass can help those suffering from ulcerative colitis as well as oxidative stress, that can lead to fibrosis as well as tissue injury.

Patients suffering from ulcerative colitis consumed wheatgrass juice for one month, on an everyday basis.

This minimized the severity of rectal bleeding and disease activity. It had no side effects and hence considered safe to be consumed by those trying to treat ulcerative colitis.

Since inflammation is one of the biggest problems associated with ulcerative colitis (hence the name, inflammatory bowel disease), controlling it is of utmost importance.

Wheatgrass juice can help ulcerative colitis by reducing the damage caused by free radicals, prevent the occurrence of lesions and ulcers, inflammation and also the development of cancer. 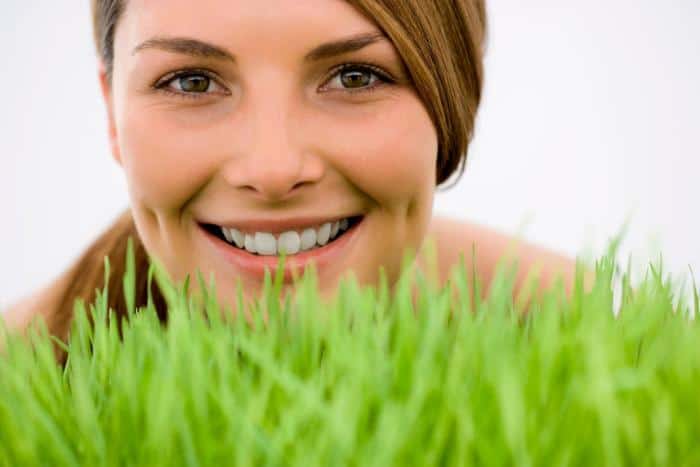 Wheatgrass juice has a component known as “apigenin” which prevents inflammation by inhibition of the production of proinflammatory cytokines (small proteins that trigger inflammation) such as TNF (tumor necrosis factor), IL-8 (interleukin-8), IL-1β.

According to a review that took into account 21 randomized controlled trials, wheatgrass proved efficient against ulcerative colitis. The components of wheatgrass individually, and together, help with the same. Read on for more.

Wheatgrass juice can be made by grinding the available wheatgrass into a powder and then mixing it with water.

This juice can be used to treat the diseases of the gastrointestinal tract, including ulcerative colitis.

To prove this, an investigation was carried out. Patients diagnosed with active distal ulcerative colitis were prescribed 100 ccs of wheatgrass juice for one month.

The analysis was conducted on the basis of the number of bowel movements and rectal bleeding.

The sigmoidoscopic evaluation was also made. It was observed that the overall disease activity diminished. The rectal bleeding also reduced. It was found to be safe, and no side effects were observed.

What does this mean? Ulcerative colitis can be treated with wheatgrass, as, when taken in the form of juice, it can reduce rectal bleeding and also minimize the disease activity.

The components of wheatgrass also work towards minimizing the effects of ulcerative colitis and the disease itself. Here’s how:

Fibre consumption has been associated with a number of benefits, be it for the heart, gut, skin. Fiber, present in wheatgrass helps ulcerative colitis as well.

Fiber consumption has always been considered very important for those suffering from inflammatory bowel disease.

High fiber diets have protective effects on the digestive tract of the patients. It can reduce the lesions present in the intestine and also prolong the remission of the disease.

Fiber consumption must be continued, except for cases where there is a relapse or remission of the disease.

Some studies also showed that consumption of fiber benefitted the disease, and none of the studies suggested that fiber intake must be restricted to patients suffering from inflammatory bowel disease.

What does this mean? Fiber present in wheatgrass is beneficial for those suffering from ulcerative colitis as it improves the metabolism and prolongs the remission of the disease.

3. Selenium in wheatgrass can help reduce inflammation in ulcerative colitis

Selenium helps in the maintenance of a healthy metabolism apart from its role in antioxidant activities and the prevention of inflammation.

It has been observed that the concentration of selenium is decreased in patients suffering from ulcerative colitis.

Patients who suffer from gastrointestinal disorders usually have low plasma selenium concentration because of the poor absorption of nutrients in the gut.

However, as the disease progresses, the levels of selenium go on reducing and the patients are at a higher risk of developing colonic cancer.

Selenium has been known for its effects against cancer as it prevents tumor proliferation and also reduces the incidences of cancer.

Impairment in the serum selenium levels was also seen in patients suffering from inflammatory bowel disease.

This increases the risks associated with cardiovascular diseases because the level of inflammation also increases in such cases. When selenium levels are adequate in the body, it also improves the body iron status, keeping the patient healthy and safe from any blood loss that may occur due to bleeding ulcers.

What does this mean? Ulcerative colitis patients have low serum selenium concentration. However, wheatgrass juice can help increase the value and prevent the occurrence of cancer due to prolonged disease.It also restores the levels of iron in the body.

4. Vitamin E in wheatgrass serves as a natural antioxidant

Vitamin E is an antioxidant, which makes it very important for ulcerative colitis patients to increase its consumption.

The antioxidant capacity in patients suffering from ulcerative colitis is less, hence antioxidants and the substances that enhance antioxidant activity are required to prevent the devastating effect on the cells of the intestines.

Free radicals can prove to be cancerous.

An antioxidant is a substance that stops the process of oxidation in the cells; which cause cell deterioration and eventually lead to cell death. Oxidation includes a series of chain reactions where highly reactive radicals are produced.

Antioxidants are required to inhibit this from happening.

Wheatgrass has been known to show high antioxidant activity. Vitamin E helps with this. According to an animal study published in the “Canadian journal of surgery” in the year 2011, vitamin E suppressed the changes caused by the free radicals to the colon.

Depletion of such vitamins, which have an antioxidant capacity is commonly observed in the pathology of ulcerative colitis. Vitamin E, when combined with selenium, reduced colonic lesions, and had antioxidant activity as well.

What does this mean? Wheatgrass has antioxidant properties because of vitamins present in it, such as vitamin E, which prevent damage to the intestine walls as well as colonic lesions, thereby helping in the alleviation of the disease.

5. Vitamin D in wheatgrass exerts a protective effect against IBD

Vitamin D has been known for its positive impact on bones. However, it also has protective effects on those suffering from inflammatory bowel disease.

It prevents the inflammation of the colon thereby preventing the occurrence of colon cancer.

According to a study, patients suffering from ulcerative colitis were found to be deficient in vitamin D. It was found that the deficiency of vitamin D was also related to the increase in the activity of the disease.

Another study published in the journal “Digestive diseases and sciences” in the year 2013 reported the same. The study also suggested that vitamin D was less in patients taking corticosteroids to treat the disease.

What does this mean? Patients suffering from ulcerative colitis are deficient in vitamin D. However, wheatgrass juice contains vitamin D, which can help control the inflammation of the colon, even for those patients who have chosen steroids as their treatment option.

Vitamin C has been known for it’s antioxidant properties. Apart from that, vitamin C has also been found to be effective against the causative organism for ulcers.

It has been found that in cases of ulcerative colitis, which is an inflammatory bowel disease (which means that it involves chronic swelling of all or part of the digestive tract), there is a large concentration of a bacterium called Helicobacter pylori in their gastrointestinal tract.

This bacterium is known to cause autoimmunity, where the body’s immune system begins to destroy the cells of the body itself. When an infection is caused due to H. pylori, the concentration of vitamin C in the gastric juice and serum reduces.

The pathogen uses an enzyme known as “urease” for its colonization and survival in the gastrointestinal tract. High concentration of vitamin C can inactivate this enzyme. Vitamin C hence has a preventive effect on ulcerative colitis patients.

It can be taken orally along with and after treatment to prevent infections from recurring and also delaying or inhibiting the remission of the disease completely, as its levels rise in the serum and gastric juice.

What does this mean? Vitamin C present in wheatgrass juice is a powerful antioxidant, and besides that, it also inhibits the growth of H. pylori, the organism that causes ulcers in inflammatory bowel disease.

Most people utilize the benefits of wheatgrass by taking it in the form of wheatgrass juice by first grinding it to form a powder and then mixing with water.

Apart from that, it is also available in the form of pellets, tablets, powders as well as capsules.

A single dose of wheatgrass can go up to 6 grams per day, and the quantity should not be exceeded.

It can be increased gradually and one must not take over three doses per day.

To utilize maximum benefits, it can be taken on an empty stomach and food and drinks should be consumed only after one hour.

Before the incorporation of wheatgrass juice into the diet in order to prevent or cure ulcerative colitis, one must keep in mind that it may take time to adapt to the plant.

Some people might be sensitive to wheat, and they should completely avoid it. It might trigger allergic reactions in some people.

Wheatgrass juice can help ulcerative colitis in many ways.

It can reduce the damage caused by free radicals, prevent the occurrence of lesions and ulcers, inflammation and also the development of cancer.

It can safeguard the gut from the occurrence and growth of H. pylori. Hence, it is very helpful. However, those sensitive to wheat must avoid it as it may worsen the condition by overstimulating the digestive system.