Cholesterol is a lipid molecule found in all cells of the body.

Cholesterol is essential for the body as it aids in the production of Vitamin D, hormones and substances that help in digestion of food.

Cholesterol molecules are composed of lipids on the inside and surrounded by a covering of proteins.

When levels of bad cholesterol are higher than good cholesterol levels, it increases the risk of developing heart diseases.

Accumulation of cholesterol in the form of plaque in the arteries may also occur resulting in Atherosclerosis and other heart problems.

It is thus very important to regulate cholesterol levels in the body to prevent the risk of cardiovascular diseases.

What is Quinoa and What are its Benefits?

Quinoa is a flowering plant known for its rich nutritive value. Its demand has incredibly increased over the past few years.

It is popularly used as an alternative to grains containing starch.

Quinoa is rich in nutrients like proteins, minerals, and vitamins. It is an excellent source of energy for those allergic to gluten.

Quinoa also has various beneficial properties that can be used for preventing various disease caused as a result of poor diet. 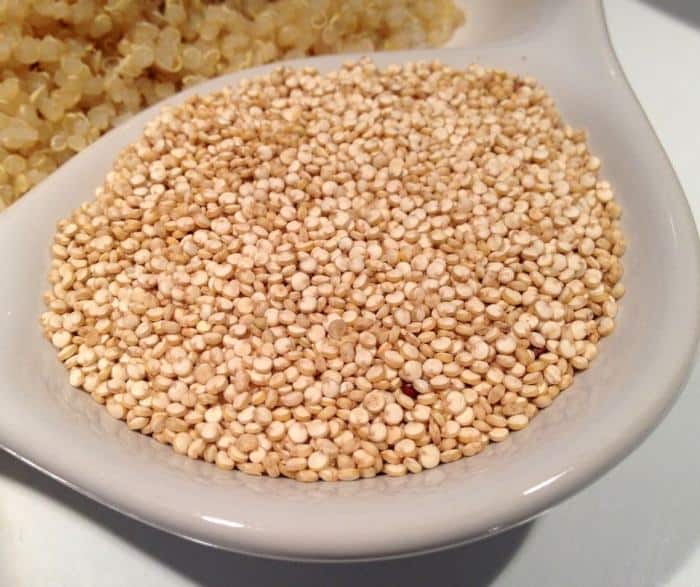 A study published in Food Chemistry in 2014 reported that quinoa seeds are rich in saponins that play a significant effect in lowering cholesterol levels when ingested orally. [1]

According to another study, the intake of whole grain foods causes a 5% reduction in bad cholesterol levels. [2]

An experimental study published in Plant Foods for Human Nutrition, quinoa seeds administered to animal models significantly reduced total cholesterol levels by 26% and levels of triglycerides by 11% as compared to those present in the control group.

2. It Reduces Risk of Heart Diseases

A study reported that quinoa seeds used in nutrition bars have the ability to prevent risks associated with cardiovascular diseases.

The study evaluated its effects on blood pressure of patients belonging to the age group 18-45 years for 30 days.

Since high cholesterol levels have been linked to heart diseases consumption of quinoa seeds on a regular basis could prevent the risk of heart diseases. [4]

A study published in Current Atherosclerosis Reports in 2004 evaluated the protective effects of whole grains including quinoa seeds on the heart.

The study reviewed various articles conducted on determining the efficiency of whole grains in preventing heart diseases and mentioned that whole grain food rich in fibers have an important role to play in the protection of the heart. [5]

What does this Mean? Quinoa seeds are rich in fibers and may prevent cardiovascular disease by reducing high cholesterol levels in the body.

3. It has Gastroprotective Activity

Those suffering from cholesterol related problems are prescribed with cholesterol-lowering medications that often present a variety of side effects commonly irritation of the gastrointestinal tract.

A study carried out by Cordeiro et al. in 2012 demonstrated gastroprotective activity of quinoa seeds on an animal model of gastric.

What does this Mean? Quinoa seeds may have a protective effect on the stomach preventing it from lesions and irritations caused by cholesterol-lowering medications.

4. It has Antioxidant Defenses

Imbalance of reactive oxygen species in the body leads to oxidative stress which is the cause of many medical complications like Parkinson’s disease, Alzheimer’s disease, myocardial infarction, atherosclerosis, heart diseases, and many others.

Quinoa seeds have found to be effective in reducing oxidative stress caused by high fructose diets.

In a study conducted by Pasko et al. in 2010, quinoa seeds were found to reduce levels of enzymes that cause oxidative stress induced by high levels of fructose in the diet.

Quinoa reduced peroxidation of lipids by increasing the anti-oxidative potential of liver, heart, kidney, testis, lungs, and pancreas exerting a protective effect on all organs susceptible to oxidative stress. [7]

According to a study published in the Journal of food science in 2012 reported that quinoa seeds are rich anti-oxidants that improve the nutritive value when added to food products.[8]

What does this Mean? Quinoa seeds have the ability to prevent oxidative stress. They prevent peroxidation of lipids in various organs of the body, and their anti-oxidative effect has a positive effect on organs subject to oxidative stress in the presence of high cholesterol levels.

Inflammation of sensitive plasma proteins increases levels of cholesterol that in turn increases the risk of cardiovascular diseases.

A study published in the Journal of food science in 2014 evaluated benefits of quinoa seeds in regulating inflammation due to the presence of saponins in it.

Different fractions of saponins extracted from quinoa seeds were tested for their anti-inflammatory properties.

Results showed that these fractions reduced the production of inflammatory mediators like nitric oxides and inhibited the release of other inflammatory molecules like cytokines, tumor necrosis factor and interleukins on cells subjected to inflammation. [9]

What does this Mean? Inflammation associated with Hypercholesterolemia can be prevented by consuming quinoa seeds and thereby preventing the risk of heart diseases.

It has been found that diabetes lowers levels of good cholesterol and increases triglycerides and bad cholesterol levels in the blood.

According to a study published in Plant Foods for Human Nutrition in 2010 quinoa seeds reduce glucose levels.

It also protects the body from adverse effects exerted by high levels of fructose and maintains the lipid and glucose levels. [11]

Another study evaluating antioxidant properties of quinoa seeds mentioned the benefits of quinoa seeds in preventing oxidative stress thereby reducing the risk of diseases like diabetes. [12]

What does this Mean? Quinoa seeds are rich in antioxidants that can prevent oxidative stress and diseases like diabetes associated with it. It is also an essential for maintaining high blood glucose levels that are a major cause of diabetes.

There is no specific dosage for the consumption of quinoa seeds for cholesterol. The seeds can be included in the diet initially in small amounts, and the dose can be increased gradually.

One can consult a health practitioner before including it in the diet.

Quinoa seeds are whole grains that are high in nutritional value and therefore do not present any adverse side effects however some general precautions should be considered.

It is important to cook quinoa seeds properly as uncooked grains may cause digestive problems.

Make sure you wash the seeds thoroughly before incorporating it into your food as these seeds are coated with saponins that are bitter compounds produced by the seeds as a defense barrier against pests and may even present toxic effects.

It may not help in patients with high triglyceride levels. [13]

Those consuming medications must maintain a gap between the intake of medication and foods that contain quinoa supplements as quinoa may interact with them and reduce their efficacy or inhibit their effectiveness.

They are safe as well as effective for consumption and can be consumed to improve cholesterol levels in the body.

Since an imbalance of cholesterol levels are associated with a variety of medical complications including quinoa seeds in the diet will not only improve cholesterol in the body but also help in preventing the associated diseases.