Whenever we step out of our homes, we get exposed to the Sun.

Sun’s rays contain vitamin D which is essential for a healthy life.

However, along with these rays, the Sun also contains some harmful rays. These are called the ultraviolet rays or the UV rays.

These rays mainly cause damage to the skin and lead to a feeling of burning of the skin, known as sunburn. The most common signs of sunburn are –

What are the Effects of UV Light on Skin?

It changes the genetic composition of the exposed cells of the body. This results in DNA mutations which may further lead to skin cancers.

Ultraviolet rays affect the melanin concentration of the skin and may cause pigmentation.

Another effect of UV rays on the human body is that it suppresses the autoimmune system of the body which is responsible for inflammation.

Scientists have found that cocoa can be used for photoprotection.

Photoprotection is a term given to the process of preventing one’s body from the Sun using various biochemical methods.

Cocoa is a crop which is harvested for the cocoa beans. These beans are dried, fermented and processed to form the cocoa powder and cocoa butter.

They are very popular among people because of its sweet taste.

Cocoa is highly beneficial for protecting the skin. This property can be used to eliminate skin damage due to photoaging. 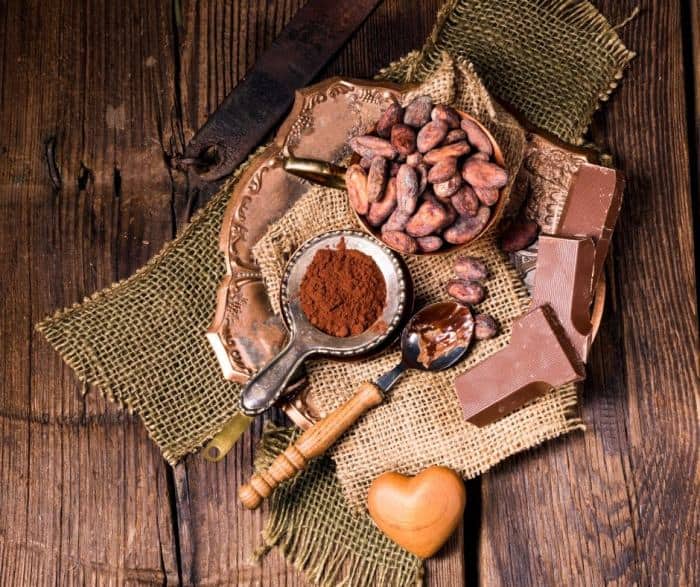 Benefits of Cocoa in Photoprotection

The various phytochemicals present in the cocoa act as agents protecting the skin from the harmful rays of the Sun.

Natural polyphenols which are present in plant products can help in photoprotection. These are mainly found in fruits, vegetables, nuts, flowers, and seeds.

The solar ultraviolet rays can cause the skin to develop melanoma (a condition where the pigment-producing cells become cancerous) or non-melanoma cancers.

It may also lead to premature ageing, inflammation, and damage to the skin cell DNA.

Polyphenols can be called as chemoprotective agents. They control, suppress and retard the process of carcinogenesis or cancer initiation. [1]

They protect the skin by absorbing the ultraviolet light that falls on the skin. It can even be said that polyphenols act as a sunscreen.

What does this Means? Polyphenols are a type of phytochemicals present in cocoa which help in protecting the skin from ultraviolet rays of the Sun. They reduce the inflammation and skin damage caused due to sunburn and prevent the development of skin cancer.

2. Cocoa has an Anti-Inflammatory effect

Exposure to the Sun’s ultraviolet rays can cause the skin to be damaged and inflamed. Sunburn is one of the most common skin conditions that occur as a result of this.

It can also cause damage to cell proteins and nucleic acids. [2]

Flavanols in cocoa show an anti-inflammatory effect. They treat the chronic as well as acute inflammation and help in mediating the inflammatory responses of the body.

This happens in the case of heart diseases as well. [3]

Flavanols regulate the immune system which is responsible for inflammation. This is why cocoa can be used as a treatment option for suppressing the inflammation.

What does this Means? Flavonols in cocoa improve the immune system which helps in treating inflammation caused as a result of being in the Sun for a long time.

Catechin is a flavanol known for its antioxidant property. It is present in cocoa in a significant amount.

Ultraviolet rays of the Sun can cause an increase in the oxidative stress in cells of the skin.

Oxidative stress simple means the inability of the body to reduce the free oxygen radicals.

These radicals are known as ROS or Reactive Oxygen Species. They are harmful for the body because they react with the cells and their products to cause severe damage.

They ultimately lead to cell death.

The excessive amount of reactive oxygen species in the skin cells can cause skin cancer. [4]

In order to control them, antioxidants are required. They are chemical substances which prevent the oxidation of various products by inhibiting the actions of oxidising agents.

In this case, the damage-causing oxidising agents are the reactive oxygen species. [5]

What does this Means? The antioxidant property of cocoa is beneficial for skin because the catechins decrease the oxidative stress of the skin cells. This prevents skin damage and cancer.

Flavanols are a type of flavans which is found in cocoa. They are basically chemical compounds found in plants.

They are the main source of catechins, which are said to provide a number of health benefits.

Flavanol protects the skin from the inside and keeps it healthy.

A study compared two types of skin in women, one being rich in flavanol and the other consuming a low amount of it. [6]

The following differences were observed:

A clinical trial studied the effect of flavanol on photoprotection. It was found that both high and low amounts of flavanol present in chocolate equally protect the skin.

As compared to no chocolate consumption, an even low amount of flavanol was beneficial in protecting the skin from UV rays of the Sun. [7]

What does this Means? The various benefits of flavanols of cocoa include a reduction in the redness, improvement of blood flow, an increase in the thickness of the skin and keeping the skin healthy and hydrated.

Dark chocolate which is rich in flavanols is more efficient in protecting the skin from ultraviolet rays of the Sun.

Another study reported that consumption of 30 grams of high flavonol containing dark chocolate for 12 weeks helped in decreasing effects of sunburn.

It reduced the dosage of medicines given to people suffering from erythema caused due to the ultraviolet rays. Hence, chocolate intake plays an important role in photoprotection. [9]

What does this Means? Chocolate rich in flavonols should be taken on a regular basis for photoprotection and to prevent the harmful effects of sunburn.

Photoaging causes premature aging of the skin due to ultraviolet rays.

Regular intake of flavanol rich cocoa keeps the skin hydrated and improves the blood circulation in the dermal layer.

This prevents the skin from the damage caused due to the Sun’s rays. [10]

Photoaging may lead to the development of wrinkles on the skin.

Cocoa is used in various cosmetic products such as creams and sunscreens due to the anti-wrinkle property it shows.

It can reduce the tanning of skin and also protect from any further damage caused by the ultraviolet rays. [11]

This was proved in a research study. It was observed that cocoa extracts prevent and treat the wrinkles caused by the ultraviolet rays.

They do so by preventing the breakdown of dermal or skin matrix. This helps in keeping the skin tight and healthy. [12]

What does this Means? Cocoa prevents the premature aging of the skin as the result of a process known as photoaging. It does so by preventing the formation of wrinkles and tightening the skin for a healthier look.

Dosage of Cocoa for Sunburns

The correct dose of cocoa which a person needs for it to be effective varies from person to person. However, a small amount of cocoa in food is healthy.

Cocoa should be consumed regularly. A small piece of dark chocolate (1-ounce dark chocolate, 70% or more cocoa) is very good for health.

Milk chocolates should be avoided because of the fats and excess sugar they contain.

Creams and moisturisers consisting of cocoa extracts can be used regularly to eliminate inflammation and provide a soothing effect on the skin.

In order to treat the skin from erythema and sunburn, 30 g dark chocolate or cocoa powder is found to be beneficial in studies. [13]

This cocoa powder contains 326 gram of flavanol and 20 mg of catechins per dose.

Consuming this powder for the suggested time period increases the blood flow of the dermal layers and keeps it hydrated and healthy.

The roughness and redness of skin along with the itchiness decrease significantly. [14]

Anything consumed in an excess amount can be harmful to the body. This is why cocoa should always be used in a limited quantity.

The products used for their application on the skin should always be tested before applying.

This is very important because one needs to make sure that he is not allergic to it.

A number of studies have found that cocoa is beneficial in the case of photoprotection.

It prevents -photoaging and can treat sunburns. The anti-inflammatory properties of cocoa help in curing the itchiness and allergies caused due to the Sun’s ultraviolet rays.

Cocoa contains phytochemicals such as polyphenols and flavanols which have many healthy properties.

They are antioxidants and prevent the development of any type of skin cancer.

Cocoa maintains the skin and keeps it healthy and hydrated.

READ THIS NEXT -
Benefits of Raw Cacao Nibs
5 Ways Coconut Oil Promotes Liver Health
Warning : Coumarin in Cinnamon Can be Harmful
Benefits of Cinnamon for Heart
4 Surprising Benefits of Spirulina For Brain Health
8 Proven Benefits of Cocoa For Arthritis