Nowadays, due to lifestyle changes, intake of processed foods and genetics, very few people are unaware of the prevalence of the disease called ulcerative colitis.

Ulcerative colitis is a disease of the colon, which is the largest part of the large intestine, characterized by ulcers (or open sores). These ulcers are painful wounds, they may bleed and also produce mucus as well as pus.

The mucosa or the inner lining of the large intestine becomes red and swollen. The most severely affected of all parts is the rectal area. If the lining of the colon is damaged, it may begin to cause bloody diarrhea.

A rare substance has been observed to reduce the effects of ulcerative colitis. It is not a medicine. It is honey, and not the regular honey. It is called Manuka honey.

The means by which Manuka honey helps aiding ulcerative colitis would be discussed in the subsequent sections.

Manuka honey is called so because it has made by bees from the nectar obtained from the “Manuka trees” which are native to New Zealand and Australia.

It has a distinctive taste and many people describe this taste as “earthy and herbaceous”. It is highly viscous in nature and has a colour varying from dark cream to brown.

Manuka honey is not like “just any honey”. It is very treasured and it has many medicinal properties. It is also called “alternative medicine” by some scientists.

Manuka honey has been known to help taking care of wounds. It has been found to have anti-bacterial properties. It increases the wound contraction and hence helps in faster healing.

Manuka honey is the highest graded honey in terms of medicinal properties. You would be surprised to learn how it helps in tackling ulcerative colitis.

It has been found that in cases of ulcerative colitis, which is an inflammatory bowel disease (which means that it involves chronic swelling of all or part of the digestive tract), there is a large concentration of a bacterium called Helicobacter pylori in their gastro intestinal tract.

This bacterium is known to cause autoimmunity, where the body’s immune system begins to destroy the cells of the body itself. Ulcerative colitis is believed to be an autoimmune disease that may be a result of genetics or some environmental factors.

H. pylori also makes the inner lining of the gastro-intestinal tract more permeable; and hence more vulnerable to pathogens and infections. H. pylori has been found to be sensitive to the honey. This is because the concentration of hydrogen peroxide in the honey, which is about 20%.

Manuka honey has a low pH ; that is between 3 and 4.5, it is acidic and hence most microorganisms are unable to survive in such conditions

The usual honeys consist of a compound called “hydrogen peroxide” which takes away electrons from the membranes of the bacteria and hence disrupts their structure.

However, Manuka honey may have the hydrogen peroxide production blocked due to several factors such as the presence of an enzyme called “catalase”. Yet, its viscosity and pH are enough to fight against any pathogen present.

What does this mean?
Manuka honey has the capability to control the growth of the bacteria that are responsible for causing ulcerative colitis.

2. It helps in the healing of ulcers

Ulcerative colitis is characterized by ulcers, that are painful and open wounds. Manuka honey has the capacity to heal these wounds. It stimulates the process of healing. This healing can occur only when the infection clears out. As ulcers are pus oozing wounds, it signifies infection.

Manuka honey has a compound called “methylglyoxal”. This leads to the alteration of some proteins present in the honey which gives it high antimicrobial properties.

Manuka honey also draws blood to the site of wound which fastens the healing process. It reduces the effect of “prostaglandins” which are substances that contribute to inflammation. It also reduces the size of the scar and stimulates the generation of tissue.

A study was conducted to check the potential of Manuka honey to help with inflammation, ulcers and oxidation in the gastrointestinal tract in animal model.

Manuka honey pretreatment was given and it was as effective as a drug named “omeprazole” which is used to treat ulcers. Manuka honey successfully protected the gastric lining of rats against lesions. There were no changes in the tissue lining on the rats that were pretreated with Manuka honey.

Gastric ulcers reduce concentration of antioxidant enzymes. However, the addition of Manuka honey increased the levels of these antioxidants preventing the damage to the walls of the gastrointestinal tract.

Manuka honey reduces “plasma tumour necrosis factor-α” which is a protein involved in inflammation; which in turn reduces inflammation. It also decreases the interleukin-1β and interleukin-6 which are substances secreted by the immune system cells of our body and eventually lead to inflammation.

What does this mean?
Manuka honey helps in the healing of ulcers by reducing infection and swelling.

3. It is an antioxidant

An antioxidant is a substance that stops the process on oxidation in the cells; which cause cell deterioration and eventually lead to cell death. Oxidation includes a series of chain reactions where highly reactive radicals are produced.

Manuka honey consists of substances called “polyphenols” which have antioxidant activity. The intestines are the sites where many oxidants are produced, more being present in the colon where ulcerative colitis is prevalent.

The reason behind this is that there are many microbes, presence of cells of the immune system and food ingredients present there. The antioxidant capacity in patients suffering from ulcerative colitis is less, hence antioxidants are required to prevent the devastating effect on the cells of the intestines; which can prove to be cancerous.

There are many more antioxidants present in honey, including vitamin C and E. These antioxidants donate electrons to the substances in the cells that are unstable, that is radicals, as mentioned above and cause oxidation. The donated electrons hence neutralize them and the harmful effects are diminished.

A study was conducted where an experiment was carried out to see the effect of Manuka honey in combination with a drug called “sulfasalazine” as a means of enhancing the antioxidant activity. Ulcerative colitis was experimentally induced in an animal model.

Sulfasalazine is a medicine used to treat symptoms of ulcerative colitis, such as diarrhea and rectal pain. It was found that the combination of Manuka honey and sulfasalazine reduced inflammation of the colon.

It was also proven that this combination increased the antioxidants in the colon and also prevented the peroxidation of lipids (that is, taking away of electrons from lipids in the cell membrane of cells of the colon thereby breaking it down).

What does this mean?
Manuka honey consists of various substances which are antioxidants and prevent the damage to the tissues of the gastro-intestinal tract; hence aiding the symptoms of ulcerative colitis. Manuka honey acts in synergy with sulfasalazine, a drug used to treat ulcerative colitis, to reduce inflammation of colon. 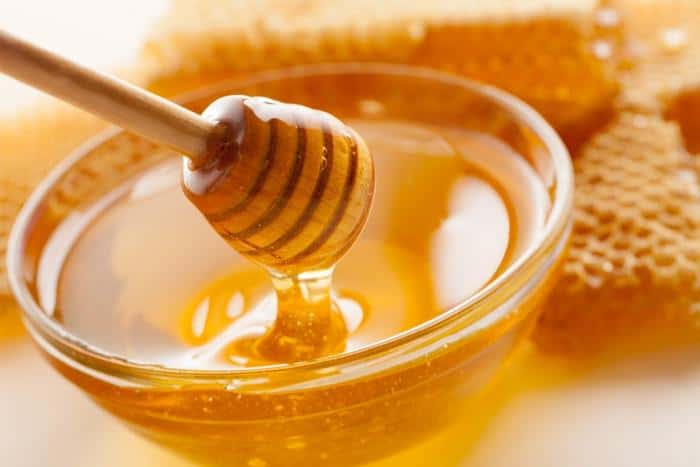 Ulcerative colitis has various symptoms, including a disrupted lining of the gastro-intestinal tract and diarrhea.

Manuka honey has been known to shorten the duration of diarrhea. It also has antimicrobial and antibacterial properties that fight any infection that is present in the intestines.

What does this mean?
Manuka honey is capable of aiding digestion by helping eradicating any infection without interference with the digestive processes.

Manuka Honey has proven to reduce inflammation of the gastrointestinal tract. This anti-inflammatory action is required for the healing of ulcers as well as for reduction of pain.

Measurements were taken and studies were conducted to find out the measurements of certain substances or proteins in the body that contribute to inflammation.

It was found that there are proteins in the body called “prostaglandins” which are involved in inflammation process as they give a signal to the cells of the immune system to accumulate at the site of injury (ulcers in this case) . Natural honey was found to reduce prostaglandin levels in humans , so does Manuka honey.

Manuka honey, as mentioned in earlier, also reduces the production of proteins such as plasma tumour necrosis factor-α, interleukin-1β and interleukin-6 which all contribute to inflammation.

What does this mean?
Manuka honey reduces inflammation of the gastrointestinal tract, wherever required. It in turn reduces pain as well and is hence effective against ulcerative colitis.

Manuka honey has been found to be safe to consume and the dosage is not specific.

It is quite logical and easy to understand that Manuka honey is basically honey, and it is used as a sweetener too because of its high viscosity due to the high sugar content.

Hence, diabetics should keep a check on the amount of intake of Manuka honey as it may result in the rise of blood sugar levels, causing further complications.

1 teaspoon of Manuka honey can be put on a slice of bread and taken before meals; which would help in aiding digestion. It assures that the digestive tract is coated with honey before the consumption of the food. It soothes and calms the lining of the digestive tract.

A study was also conducted to confirm that Manuka honey is safe for consumption. The aim of the study was to ensure that there were no allergic reactions that occurred, and that Manuka honey did not change the required microbe concentration of the gut or intestines.

It was found that people who took Manuka honey every day for 4 weeks did not suffer from any side effects. There was no change in the level of antibodies present in the gastro-intestinal tract as well.

Honey is all in all, a sweet substance. People suffering from the metabolic syndrome must keep in check, the dose they take in order to keep blood sugar levels in check.

There have been studies(as mentioned above) that prove that there are no allergic reactions to Manuka honey. However, our body can develop allergies from any substance at any given point of time.

Hence, before beginning with an everyday intake of Manuka honey, one can first take a small amount of honey and check for side effects.

Manuka honey is an organic substance with no side effects, unlike the many medications used to treat ulcerative colitis, including pain killers (which, if taken for a long time induce stomach ulcers) and steroids which weaken the body in the long run.

Instead, it adds a lot to the body to help the immune system. It fights H. pylori, it heals ulcers, it is anti-inflammatory as well as anti-oxidant. It is a complete package.

People have said that Manuka honey has different taste and one would have to get used to the taste. After reading about all its benefits, adapting to its taste is completely worth it!