Cinnamon is the well-known spice got from the cinnamon tree.

The dried quills are used for cooking either as a ground powder, sticks or oil.

Both differ in flavors with Ceylon cinnamon being the more refined and subtle of the two. Cassia is less expensive and widely available in North America.

Cinnamon is used in cooking not only for its flavor but its various health benefits.

In India cinnamon is an essential spice, people have been using it for hundreds of years.

In Ayurveda, cinnamon is a cure for indigestion, diabetes, colds and other infections.

Cinnamon is said to improve vitality, energy, and circulation.

Cinnamon is also used as an herbal remedy to treat high blood sugar, high cholesterol, yeast infections, arthritis and as an aphrodisiac.

Cinnamon oil is used in aromatherapy and can be used in our homes as a room freshener, in a potpourri, decoration, moth repellant and more.

Cooking with Cinnamon Powder and Sticks 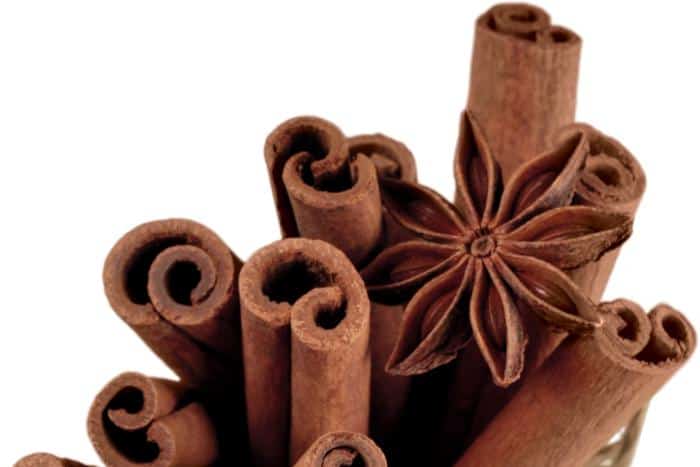 It really depends on the flavor you require.

There is no hard and fast rule on how to use it.

It all depends on one’s taste.

I have seen, in my family itself my mom uses cinnamon in a much different way then my wife does!

Cinnamon has a delicate flavor and is used in both sweet and savory dishes.

This spice is popularly used in Asian and Middle Eastern cooking to flavor lamb, aubergine, rice dishes, curries and more.

Here are some interesting ways that we can use cinnamon in cooking. We use some of them at my home and others I have found using research and asking my wife and friends.

Cinnamon oil is extracted from the cinnamon leaves or bark using different processes.

This oil could also be used in cooking to make teas or candies.

It is also used to make medicinal preparations, in aromatherapy and as ingredients in creams or lotions for topical use.

Undiluted cinnamon oil must not be ingested.

Food grade cinnamon oil approved by the FDA is available for use in baking and cooking.

This oil contains 70-90% cinnamaldehyde which is the chemical compound in cinnamon.

Cinnamon oil could be used as a food preservative due to its antifungal properties.

It has a similar flavor to the powder or bark but is stronger.

It is suitable for use in ice cream, condiments, baked goods, and candies.

Here are a couple of recipes which use cinnamon.

You can find plenty more at online cooking sites. I am putting a few where we use cinnamon at home.

Sweet Potatoes: This recipe is very tasty. It is filling and offers excellent nutritive value to.

This dish gives us 15% daily caloric value and also has nutrients like vitamin A, C, and B6, manganese, potassium and copper.

Apple and Fig Cobbler: This is a dish that can be made in 10 minutes and enjoyed as a snack or for breakfast.

Cut and remove the core of the apples.

Then slice it into ¼ inch pieces. Then turn over and slice across so the apples are diced.

Mix together the apple and lemon juice. Cut figs into quarters and then dice them to a similar size as the apples.

Add this to the apples.

Toss them with the lemon and apple juice along with the rest of the ingredients.

This dish can be served chilled or eaten fresh and offers us a good deal of our daily requirement of fiber and manganese.

When purchasing cinnamon for cooking, it is good to know the differences between the two varieties.

When purchasing cinnamon powder for cooking, it could be difficult to know the difference.

In such cases, make sure the label on the product identifies the variety.

Ethnic markets and local stores will sell both varieties. Select organically grown cinnamon that will be the healthier option.

Cinnamon sticks will have a stronger flavor.

It will stay fresh for even a year. Ground cinnamon usually has a shorter shelf life of up to 6 months.

Make sure both are stored in tightly sealed glass containers which are kept in a dry, cool and dark place.

For longer shelf life, cinnamon can be stored in the refrigerator. Smell the cinnamon to check if it is fresh before using it.

If it does not smell sweet, it should be discarded.

We can safely consume cinnamon in food amounts.

When used for medicinal purposes, cinnamon is usually used in higher amounts.

This could sometimes cause allergic reactions.

It could cause vomiting, diarrhea, drowsiness or dizziness.

Pregnant and breastfeeding women, diabetes patients, those taking anticoagulants and those requiring surgery should avoid cinnamon in excess amounts.

Anyone with food allergies must avoid using cinnamon oil for it is very concentrated.

Since food amounts of cinnamon are safe to use, we can go ahead and enjoy the various recipes which use this flavorful spice.

READ THIS NEXT -
6 Ways Wheatgrass Can Help in Blood Pressure
What is Ideal Interval Between Laser Hair Removal Treatments?
5 Benefits of Aloe Vera Juice in Urinary Tract Infections (UTI)
Cinnamon Helps In Blood Sugar Control And Can Prevent Pre-diabetes
12 Proven Benefits of Argan Oil For Heart Health
How Cinnamon Oil Can Help in Toe Nail Fungus?