The most commonly used cinnamon varieties are Ceylon cinnamon and Cassia Cinnamon.

Importance of Cinnamon For Sugar Metabolism

Metabolism refers to the entire gamut of chemical and physical processes which use or convert energy.

These could be breathing, circulating blood, digestion of food and more.

Each organ in the body has a specific metabolic profile for they require fuel and energy to function.

The liver is the central organ which is involved in carbohydrate or sugar metabolism for it stores glucose, synthesizes it, forms glycogen and then transports it to other body tissues.

Sugar metabolism is a continuous process and it is an essential function for the proper functioning of the body. Glucose is the primary carbohydrate which our body metabolizes.

Cinnamon can Increase blood sugar metabolism by as much as 20-fold causing improvement in blood sugar regulation.

In one study it was found that when foods rich in carbohydrates were seasoned with cinnamon, there was less impact on blood sugar levels of the study group.

This could be due to the ability of cinnamon to slow down the rate of digestion after a meal.

This can reduce the rise in blood sugar levels.

Another study found that volunteers who consumed rice pudding and cinnamon after a meal had reduced levels of blood sugar.

A study to determine if cinnamon can improve levels of blood glucose, total, LDL and HDL cholesterol and triglycerides was conducted. 30 women and 30 men with type-2 diabetes were selected and divided into 6 groups.

After the study period, it was found that the groups on cinnamon had lower levels of blood glucose, total and LDL cholesterol and triglycerides while the placebo groups did not demonstrate any significant changes.

Hence it was suggested that cinnamon could help control blood glucose levels in patients with type-2 diabetes. 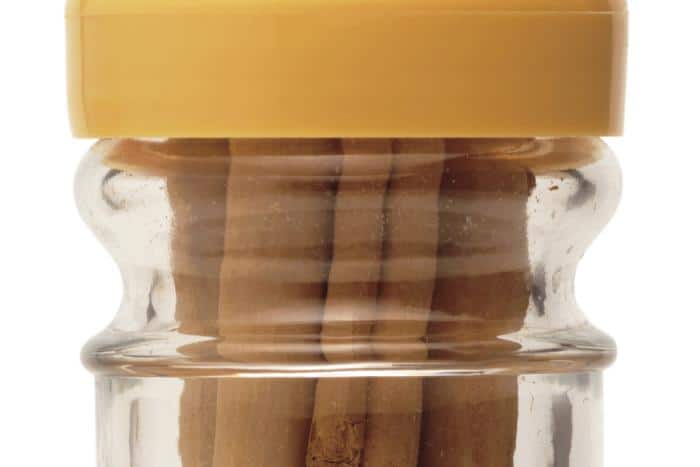 It is very important to maintain blood glucose at optimum levels since the brain and other organs require this for energy. Fasting blood glucose levels should be ideally between 75 – 100mg / deciliter.

If it is between 100 – 125mg / deciliter you could be considered pre-diabetic.

The “Journal of the International Society of Sports Nutrition” suggests that for pre-diabetic people a daily supplement of 500mg cinnamon could lower blood glucose levels.

Cinnamon benefits us to regulate blood glucose irrespective of whether we are diabetic or not.

Taken in food amounts, cinnamon does not cause any side effects.

Pregnant and breastfeeding women are advised to avoid cinnamon supplements.

Cinnamon oil when used undiluted could cause skin inflammation when it touches the skin and excess oral intake of cinnamon could cause digestive problems.

Cassia Cinnamon contains blood-thinning agent coumarin which must not be combined with anticoagulant drugs.

Diabetic patients must exercise caution when using Cinnamon for it has the ability to reduce levels of blood sugar.

READ THIS NEXT -
Health Benefits of Coconut Oil
Aloe Vera for Cellulite
Side Effects of Goji Berries
4 Surprising Benefits of Maca for Anxiety + Dosage, Precautions
Cinnamon and Honey
Cinnamon Benefits for Oral Thrush