Sweetness is perhaps the most revered and coveted taste by all. That’s why all paediatric medications are so palatable.

A bite of processed chocolate elevates our mood in seconds. And who is responsible for all this: the pristine white crystals of sugar!

However, in this article, we are using the term ‘sugar’ to cover all sweet substances that is even sugar substitutes.

Sugar seems to find its way in every next food item we consume. Approximately 75% of the packaged food in US has sugar.

At least half of the sugar we consume comes from soft drinks, fruit drinks, and sports drinks.

Many so-called ‘healthy foods’ are laden with sugar.

1 serving of yogurt contains 29 grams or 7 teaspoons of sugar, a breakfast bar made from real fruit and whole grain has 15 g of sugar while instant flavoured oatmeal is packed with around 20-30g of sugar.

So even if we skip dessert, sugar is creeping in our diet in some way or the other.

But do we ever stop biting into glazed doughnuts (6 teaspoons of sugar) or ice cream ( 4 g added sugar per serving).

Well, sugar has around 61 different names in the nutrition label presented by manufacturers.

Since the manufacturers are asked to write only about total sugar, it’s hard to determine where the added sugar comes from. Here is a list of few of the names:

Apart from being omnipresent, there must be a reason why we can’t get enough of sugar. It just a mere habit of eating highly palatable food items or is it beyond that.

Gluttony for White Crystals: How Sugar Hijacks our Brain?

Yep it's beyond that.

To a certain extent, it’s a matter of choice and if you are able to identify it at this stage then you are safe.

But if it has developed into a full-blown addiction, there are chances that you might need help.

Yes, sugar addiction is as strong as substance abuse. Food is necessary for our survival unlike recreational drugs but anything in excess is unhealthy.

Our brain is designed to reward and motivate us for when we do something pleasurable. In neuroscience, food is considered a ‘natural reward’.

In order for us to survive the brain reinforces and makes us repeat pleasurable activities. Mesolimbic pathway is a system prevalent in our brain that rewards us for such activities.

When we do something pleasurable, our brain cells located in a specific part of the brain called ‘ventral tegmental area’ release some ‘feel good’ chemicals.

These chemicals signal another part of the brain called nucleus accumbens which controls our next bite- whether or not should we have another slice of the lemon pie and also stores this as a pleasant memory which we can recreate in future.

This is how the reward circuitry normally works. But like drugs of abuse, sugar hijacks this pathway and leads to abnormal functioning such as loss of control on food intake.

It makes us dependent on sugar-rich foods and its withdrawal causes the same symptoms you would see in rehab patients.

In fact, animal studies demonstrate that sucrose is far more rewarding than cocaine.

Glycemic index is the effect a food item has on our blood glucose levels.

This study points out that sugars rich in food have a long-lasting effect on our brain’s pleasure center.

And these lasting effects can seriously hamper our reward circuitry.

A study conducted on rats demonstrated that rats that were exposed to sugar in adolescence developed reduced motivation towards sacharrin and sugar like substance maltodextrin in adulthood.

This showed that they had developed tolerance to dopamine rush caused by sucrose consumption.

However, these rats had increased preference for cocaine in adulthood indicating that sucrose tolerance perpetuated the brain’s reward circuitry to look for a different alternative.

Sugar overconsumption at a developmental stage can increase the risk of developing reward seeking psychiatric disorders.

For those who are intrigued to know which chemicals bring about these activities in the brain, here are the details.

Dopamine is one of tfeel-goodood chemicals that is released in response to addictive drugs. It is responsible for the rewarding feeling and behaviour reinforcement.

To evaluate the role of dopamine in sugar addiction a study was conducted where dopamine antagonists were fed to animals prior to sucrose feeding.

This resulted in decreased intake of sucrose thus indicating that release of dopamine is essential for the reward stimulating effect of sucrose.

In this case, individuals who are low on dopamine need to eat excess of sugar or the addictive substance to achieve the same pleasurable state.

It works as a self medication to boost a sluggish dopamine system.

An alternative interpretation is that increased consumption of sugar rich or highly palatable food items dulls the dopamine response.

This makes food less satisfying and motivates even more consumption to achieve a higher or pleasurable experience.

Opiods are a set of neurotransmitters or chemicals secreted by brain whose primary function is to relieve pain.

They are linked with dopamine’s activity in reinforcing behaviour or habit. Opiods have rewarding effects similar to morphine and heroin.

An experimental study was conducted wherein rats were food deprived for 12 hours and then given access to 25% glucose.

They were then treated with naloxone, an opiod antagonist or inhibitor. The treatment caused symptoms such as teeth chattering and anxiety.

The study demonstrated that intermittent but excessive sugar consumption led to a state of opiod dependence such that treatment with opiod inhibitors caused withdrawal symptoms.

Sugar even modifies opiod receptors (proteins that bind with opiods to mediate its activity) so as to increase sensitivity to sugar intake.

This strong rewarding effect of sucrose is seen reflected in the fact that alcoholics have an increased liking for sweets.

However, insulin reverses this effect.

Alcohol and food use the same reward circuitry and when this pathway is occupied by one it would block the other.

That is why when naloxone is administered binge eaters reduce consumpution of sweet and high fat foods while alcoholics reduce consumption of alcohol.

3. Acetylcholine - The brain chemical that acts against sugar addiction

Acetylcholine is another neurotransmitter whose function is implied in food and drug intake. Withdrawal from drugs or alcohol increases acetylcholine levels and creates a state of depression and aversion.

Studies show that after regular bingeing on sucrose solution, withdrawal can lead to imbalance of dopamine and acetylcholine levels and this causes anxiety.

5. Ghrelin - Role of our ‘hunger’ hormone in sugar addiction

The effect of considering food as a natural reward is not limited to the brain alone. Ghrelin a hormone that is secreted in our intestines is also involved in the reward circuitry as well as stress.

It is known as the hunger hormone and it stimulates appetite.

Ghrelin directly targets the earlier mentioned ventral tegmental region of the brain and the mesolimbic system to increase motivation for seeking and consuming sweet foods.

It also interacts with dopamine and acetylcholine and hence regulates the food reward response.

Ghrelin interacts with opiod receptors to increase sucrose motivated behaviour and administration of opiod antagonists can inhibit this activity. 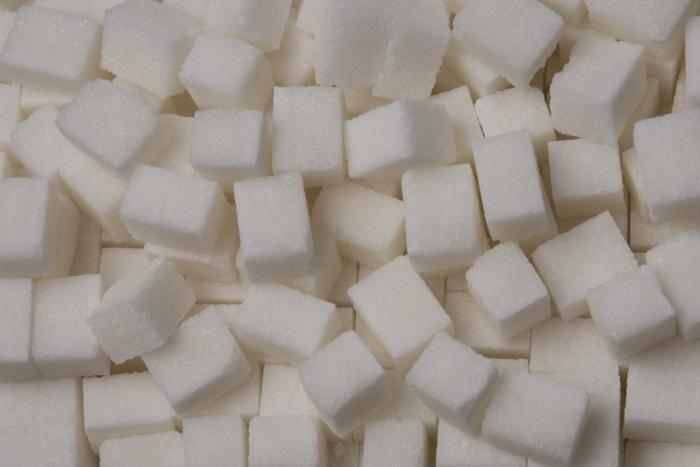 Is Sugar as Addictive as Drugs of Abuse?

Researchers have found many similarities between patterns of drug abuse and sugar addiction.

They are classified as follows.

Bingeing - You just can’t get enough of those sweet crystals

Bingeing is an escalation of intake which is characteristic of drug abuse.

It occurs as a result of tolerance where you have to eat in excess to achieve the euphoric state or sensitization where eating in intermittent excess amounts yields high levels of pleasure.

A study was conducted where rats were given intermittent access to sugar and chow (rat food).

Interestingly the rats increased their sugar intake over the time especially in the first hour of access.

Both groups elevated their intake. The rats given limited access consumed the same amount of sucrose as the other rats did in 24 hours.

Rats fed daily intermittent sugar and chow regulate their caloric intake by decreasing their chow intake to compensate for the extra calories obtained from sugar.

Withdrawal - Abstaining from sugar leads to anxiety and depression

This is the reason why you feel fatigue and dizziness when you switch to a low carb diet. Sudden withdrawal of sugar is known to cause decrease in body temperature and agitation.

A study was conducted to understand the deprivation effect of sugar.

After 12 hours daily access to sugar, rats were abstained from sugar for 2 weeks. After the period of abstinence, their intake increased by 23%.

Repeated exposure to drugs of abuse, increases its stimulant effects and also increases sensitivity to other drugs. This is known as cross sensitization.

Surprisingly even sugar consumption demonstrates such activity. Experiments prove that it increases sensitivity to a drug called amphetamine, a drug that acts on the central nervous system as a stimulant.

Gateway effect is when the consumption of one drug leads to motivation to consume another.

Consumption of legal drug ‘nicotine’ acts as a gateway to illegal drug ‘cocaine’.

Bingeing on sugar can increase your susceptibility to consumption of alcohol.

Excess sugar consumption can have harmful consequences such as obesity, cardiovascular diseases, dental and metabolic disorders.

And the worst of the lot, it can develop into an addiction.

In this case, it may require medical treatment in the form of drugs to reduce the activity of brain chemicals and counselling or behavioural therapy.

Even will power and change in diet habits can help cure this addiction.

It is pretty interesting to know that our tendency to eat sweet or hyperpalatable foods is not only a matter of choice but is a result of a complicate network of chemicals acting in our brain.

So next time you reach for the fourth glazed doughnut, ponder over the thought that is your habit phasing into an addiction.

READ THIS NEXT -
5 Ways Safflower Oil Helps in Weight Loss (Science Backed)
Lipozene And Weight Loss: Does it Really Work?
How Many Calories Should I Take For Weight Loss?
How Calorie Cycling Benefits In Weight Loss