Acne breakout is one of the most common and widely spread problems that people face across the globe irrespective of their gender, race, and age.

Its symptoms include regular breakouts of whiteheads, blackheads, and pimples that are marked by scarring of the skin.

Herbal and natural therapies like a honey mask, sea salt treatment, etc have emerged as an effective form of relief from acne.

Use of witch Hazel is one such method and has proved to be quiet effective in the reduction of acne breakouts.

What is Witch Hazel?

Witch Hazel is a flowering plant genus belonging to the family of Hamamelidaceae. It has three species H.ovalis, H.virginiana and H.vernalis in North America and Japan respectively.

The leaves and bark of H.virginiana (North America) are used to make an astringent which may be used medically.

Various health products include this astringent as an important component and it was also used by the American Indians for medical purposes.

In the present age, this astringent derived from the witch hazel is used topically to treat sores, bruises, swelling, eczema, cracked or blistered skin and also as an aftershave lotion.

It is further used for the treatment of various insect bites, poison ivy and for varicose veins and hemorrhoids.

Its use is also recommended to women for reducing the swelling and sores from childbirth.

How does Witch Hazel Treat Acne 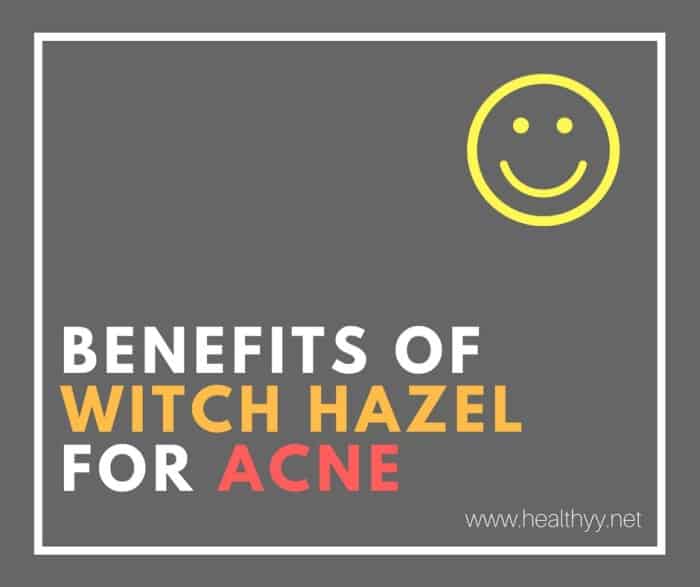 The hazel leaves and barks contain up to 10% tannins which is known to exhibit natural astringent properties and therefore dries, hardens and protects the skin against oiliness.

Also, it is typically used as an astringent, anti-oxidant and anti-bacterial treatment of skin as it reduces the severity of the inflammation developed as a result of acne and eczema.

Witch hazel is commonly used as a home remedy.

The extract can be derived by boiling approximately 5 grams to 10 grams of the herb (barks and leaves) in a cup (0.24 liter) of water.

Doing the same with white oak bark or English walnut bark will derive a similar astringent. The preparation thus derived must be strained before use and can be safely used three to four times a day.

This preparation, however, differs from those available in the market as in the latter tannins is lost during distillation.

It can be applied 6 times a day or after every bowel movement.

Topical: The distillates are diluted with water in the ratio of 1:3 and in semi-solid preparation at the concentration of 5% to 10% of the crude drug.

Benefits of using witch hazel on your skin

Though its side effects are rare and it is safe for most adults when applied topically, in minor cases of allergy it might cause skin irritation.

When taken orally in small doses it rarely causes any side effects. In some cases, however, it might lead to an upset stomach.

When taken in extremely high dosage it might cause liver problems.

Other side effects include

Witch hazel is a widely used home remedy for the treatment of acne. It is also a largely marketed product.

We did a survey of an online review of consumers who are engaged in the use of and treatment through with hazel and here is a summary of what they liked and disliked about the product:

What they liked about the product

Easily available and cheap: Most consumers thought that it was very cost effective and easily available, unlike other chemical based medications which were difficult to find and at the same time expensive. Witch hazel was easily available within the range of 1.5$ to 4$.

Time effective: In many cases, witch hazel was quick to show effect. It started showing results in merely two to three days. In some cases, blackheads were seen to be gone in only one night.

Freshness: Many consumers after using witch hazel experienced a sense of freshness in their skin which was a new feeling for those marred by the dullness of acne marks and spots.

Skin texture: It was effective in not only reducing the frequency of acne breakouts but also made the skin gentler and softer. The tone of the skin also became even.

Dryness: Some consumers complained of the dryness of skin caused by the application of witch hazel. It might be a result of its astringent property which leads to tightening of the skin pores.

Bad smell: A few consumers were disturbed by the bad, stingy smell that witch hazel emitted on the application.

Herbal therapy for treating medical conditions has been in use since ages. It not only leads to a quick and ensure cure but is also free of the severe adverse impacts that are caused by chemical based medications.

Witch hazel is a quick and efficient home remedy for acne breakouts. You do not even have to bother going to the market to try this treatment and can easily prepare it in the kitchen.

It will not only treat your acne troubles but also affect a betterment of your skin in general, cleaning and conditioning it. Most consumers highly recommended its use for preventing acne breakouts.