Rheumatoid arthritis is an autoimmune condition affecting the joints.

It is characterised by a reduced joint function which occurs as a result of erroneous functioning of the immune system.

Joint inflammation and pain are the prime symptoms of rheumatoid arthritis.

The exact cause of the disease is not known. NSAIDs and opiods are prescribed to help manage pain.

Disease-modifying anti-rheumatic drugs (DMARD) are prescribed to reduce the progress of the disease.

Exercise and diet are also important in the treatment of rheumatoid arthritis.

Fish oil supplements are famous for their omega 3 fatty acid content which is highly essential for brain health. Here is how science supports the role of fish oil in rheumatoid arthritis.

What is fish oil?

Fish oil is derived from tissues of oily fish like salmon, mackerel, sardines, herring etc. They are rich in omega 3 fatty acids.

Fishes do not produce omega 3 fatty acids but accumulate them by consuming other sources that have accumulated reserves.

These fatty acids serve as precursors to various inflammatory metabolites.

How can fish oil help in rheumatoid arthritis?

Quite a bit of research has investigated the anti-inflammatory effect of fish oil in rheumatoid arthritis.

Fish oil is rich in omega 3 fatty acids- eicosapentaenoic (EPA) and docosahexaenoic acids (DHA). Arachidonic acid is the main metabolite that is responsible for the formation of many inflammatory chemicals.

When supplemented with omega 3 fatty acids, EPA competes with arachidonic acid in metabolism via COX and LOX pathways. COX and LOX are inflammatory enzymes.

The end products produced from EPA have reduced biological activities in comparison to those produced by arachidonic acid.

EPA and DHA give rise to formation of compounds called resolvins which have an anti-inflammatory effect.

EPA –monoglyceride is found to have therapeutic potential in reducing inflammation in the treatment of rheumatoid arthritis.

They primarily act by suppressing the production of inflammatory chemicals in the body.

Studies in humans show that fish oil supplementation brings about a decrease in inflammatory parameters such as tumor necrosis factor.

A clinical trial was conducted wherein 32 rheumatoid arthritis patients were treated with dietary supplementation of omega 3 fatty acids or placebo.

The level of interleukin-1, an inflammatory chemical was reduced in blood plasma levels in the fish oil group.

An improvement in clinical status was observed.

Di Giuseppe et. al reported that the risk of rheumatoid arthritis was 20 to 24% lower for 1 up to 3 servings per week of fish as compared to never consumption.

What does this mean? Eicosapentaenoic acid and docosahexaenoic acid found in fish oil aid in reducing inflammation by replacing arachidonic acid in metabolic reactions, a precursor in inflammatory reactions. Fish oil consumption is associated with reduced risk of arthritis.

2. Fatty acids in fish oil are beneficial in autoimmune diseases

Omega 3 fatty acids are found to be beneficial in the treatment of autoimmune diseases.

This is primarily because EPA competes with arachidonic acid to produce less inflammatory molecules which reduce activation of immune cells and inhibit autoimmune reactions.

What does this mean? Omega 3 fatty acids found in fish oil show therapeutic potential in autoimmune reactions by preventing activation of immune cells.

Omega 3 fatty acids and their metabolites help in attenuating pain by other mechanisms other than reduction inflammation; they also benefit in neuropathic pain.

Torres-Guzman et. al conducted an animal study where they demonstrated that oral supplementation or injections in the joints of omega 3 fatty acids reduced pain and swelling.

Supplementation with fish oil increases the level of essential fatty acids in the blood as well as synovial fluid (lubricating fluid in the joints) and this associated with a decrease in pain.

An animal study reports that omega 3 fatty acid supplementation can serve as an adjunct to opiod therapy for managing pain and can attenuate side effects of morphine.

A study investigating the effect of fish oil supplementation in discogenic pain reported that fish oil can serve as an alternative to painkillers.

60% of the participants reported that their overall pain improved while 59% stopped taking prescribed NSAIDs. 80% were satisfied with their improvement. 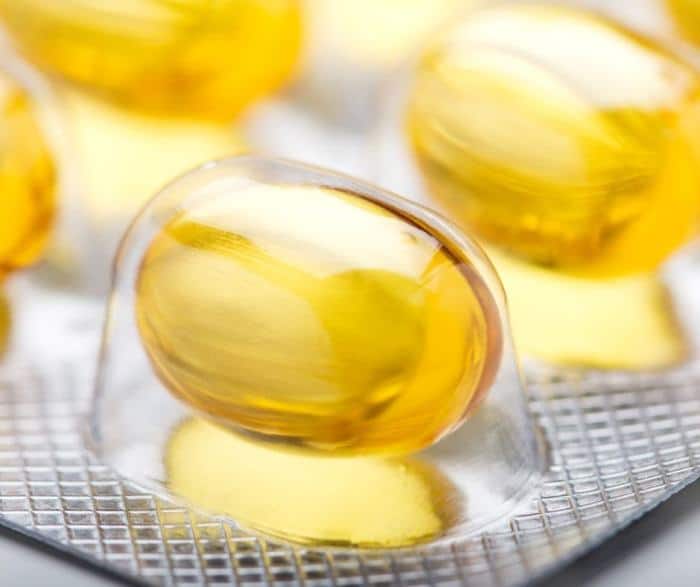 15-week supplementation with fish oil supplementation brought about significant improvement in clinical parameters in rheumatoid arthritis and increase in fatty acid eicosapentaenoic acid in the blood.

Another clinical trial demonstrated that fish oil infusion is therapeutic in rheumatoid arthritis.

Fish oil reduced the failure of DMARD (disease modifying anti-rheumatic drugs) therapy and also reduced the relapse of the disease.

Researchers concluded that fish oil has similar benefits as a combination treatment of DMARD and methotrexate.

Foods enriched with omega 3 fatty acids are also found to reduce inflammatory chemicals in the blood.

What does this mean? A number of clinical trials have investigated the role of fish oil supplementation in rheumatoid arthritis and demonstrated clinical improvement within 3 months. A reduction in inflammatory parameters, number of tender joints and morning stiffness is reported.

5. It reduces dependence on conventional drugs

A study was conducted to evaluate whether high dose supplementation of fish oil can reduce dependence on non-steroidal anti-inflammatory drugs (NSAIDs).

Individuals suffering from rheumatoid arthritis and taking diclofenac (75mg twice a day) were enrolled in the study.

They were given 130mg/kg/day of omega3 fatty acids or 9 capsules of corn oil. At week 18 or 22 diclofenac was substituted for placebo and fish oil supplementation continued for 8 weeks.

A decrease in the number of tender joints, duration of morning stiffness and overall disease severity and pain was observed in the group taking fish oil.

The decrease in the number of tender joints remained significant even after discontinuing diclofenac.

A significant decrease in interleukin level, an inflammatory agent was observed in fish oil group.

Another clinical trial demonstrated that fish oil and paracetamol combination reduced the production of 2 series of prostaglandins, the inflammatory chemical in the body, by an amount that is equivalent to therapeutic doses of NSAIDs.

A year-long study assessing the effect of fish oil supplementation on the dependence on NSAIDs, demonstrated that fish oil supplements brought an about significant reduction in NSAID intake at 3 months and this effect persisted till month 15.

Another study also confirmed these results demonstrating that 2.6g of omega 3 fatty acids taken daily for a year can help in the reduction of consumption of anti-rheumatic drugs. Cod liver oil supplements are also found to reduce NSAID consumption in rheumatoid arthritis.

6. It reduces the side effects of conventional painkillers

EPA present in fish oil has an anti-ulcerogenic effect. Study shows that fish oil consumption can protect from gastric lesions or erosions in the gastric mucosal lining caused by NSAIDs such as aspirin and indomethacin.

Park et. al comment that omega 3 fatty acid based NSAID can prove to be the next generation GI safe NSAID.

Omega 3 fatty acid can help in protecting from gastric side effects and cardiovascular effect associated with NSAID.

A study by Faust et. al in humans suggests that dietary fish oil is inefficient in protecting the stomach from aspirin-induced gastric damage.

Kremer et. al demonstrated that 8g supplementation of fish oil in individuals taking pain killers did not show significant changes but a definite reduction in stomach inflammation was observed.

What does this mean? Fish oil’s anti-inflammatory effect can protect from gastric damage and cardiovascular risk associated with NSAIDs.

7. Fish oil can benefit in complications associated with rheumatoid arthritis

A 3 year study was conducted wherein clinical parameters of rheumatoid arthritis patients who took fish oil to those who didn’t were compared.

Those who took fish oil had lower levels of arachidonic acid in blood cells.

Arachidonic acid is the precursor of inflammatory processes and cardiovascular events.

Inflammatory chemicals like thromboxane and prostaglandin were lower in the fish oil group.

Use of painkillers reduced by 75% compared to baseline in group taking fish oil. Various studies reflect that fish oil supplements are highly beneficial in treating and preventing cardiovascular disease.

Fish oil is available as liquid or capsules.

The American Heart Association recommends 250–500 mg/day of EPA and DHA while FDA suggests no more than 3g of the combination.

Studies show that a minimum daily dose of 3g of EPA and DHA is required for the anti-inflammatory benefit.

This is however different from the dose of fish oil.

A dose of 1g of fish oil can serve as a preventative measure.

It is advisable to consult a doctor before taking fish oil supplements.

How to take bottled fish oil?

Cleland et. al in their paper: ‘Fish oil: what the prescriber needs to know’ highlight some important points about fish oil, how to take it, possible side effects and benefits. Here is their recommendation on taking bottled fish oil.

Fish oil has an unpleasant taste and odour which can be masked with flavoring.

An interesting way to take fish oil is to take it with juice. Pour 30-50 ml of fruit juice or a juice of your choice in two shot glasses.

Add a layer of fish oil to one glass.

Consume the fish oil and juice combination avoiding any contact with lips and thereafter have the juice from the other glass to remove any fish oil from lips.

It is advisable to take fish oil before solid meals without any fluids. Excess fluid causes the oil to float in stomach which gives the repeating taste.

If reflux is a problem then avoid taking any fluids or aerated drinks with fish oil and consume it prior to meals.

This ensures that it mixes with food and exits into the intestine.

If the problem still persists, you can lie down in the left lateral position which will ensure that the oil floats into the intestine.

Fish oil supplements can reduce the problem to a certain extent but since the oil from the capsules is released in the stomach these problems can occur.

Since fatty fish are at the top of the food chain, they are susceptible to pollution by toxic substances.

Therefore marketed supplements of fish oil should be checked for toxic pollutants and heavy metal contamination.

Side effects associated with fish oil consumption include repeating taste, GERD like symptoms, diarrhoea, aversion to taste and smell, headache.

Fish oil supplements have been associated with an increase in bleeding tendency. Possible drug interactions of fish oil include NSAIDs, cyclosporine, methotrexate and TNF inhibitors.

Fish oil due to its omega 3 fatty acids finds its use in various inflammatory and autoimmune diseases.

Reduction in inflammatory chemicals in the blood, number of tender joints and overall pain is reported as early as 3 months of the treatment.

Fish oil consumption can help rectify the omega 3 and omega 6 fatty acid ratio in diet which serves as a protective measure against various diseases.

Fish oil supplementation can be a beneficial adjunct to conventional therapy in rheumatoid arthritis and reduce dependence on NSAIDs.