Influenza is commonly known as “flu”, and is a very common infectious disease caused by the influenza virus.

Symptoms, which include runny nose, sore throat, high fever, vomiting and nausea, can be mild to severe and begin about two days after exposure to the virus.

Influenza spreads around the world in a yearly outbreak, resulting in about three to five million cases of severe illness .

Manuka honey is a special kind of honey that has a lot of additional health benefits apart from that of regular honey.

Manuka honey is made by bees that feed on the nectar of wild Manuka trees found exclusively in New Zealand.

An important compound that is found in manuka honey that lends it a number of its beneficial properties is Methylglyoxal. This compound is responsible for what is commonly called “non peroxide activity” that is observed in manuka honey.

It contributes to anti-microbial effects exhibited by manuka honey, and the effect is above and beyond what is observed in regular honey.

3 Benefits Of Manuka Honey In Influenza

Manuka honey has anti-viral property that benefits in treating flu.

Methylglyoxal present in mauka honey contributes to its anti-viral effect which is beneficial in terminating infections that cause flu.

Although the effect and potency of manuka honey against various viral infections has not been as widely researched as it has been for bacterial infections, there is nevertheless considerable evidence to suggest that manuka honey could be used as a legitimate home remedy for diseases caused by viral infections such as influenza.

A recent study was conducted in July 2014, to look into the potential use of manuka honey as a treatment option for patients with influenza.

The study focused on the study of the anti-influenza viral properties of manuka honey in combination with other well known anti influenza viral drugs available in the market, such as zanamivir or oseltamivir.

Manuka honey was extremely efficient in reducing the rate of replication of the influenza virus. This observation proves the virucidal effect of manuka honey. In the presence of 3.13 mg/ml of manuka honey, the effect of zanamivir and oseltamivir was reduced to a fraction of their single use.

The overall results showed that honey, in general, and particularly manuka honey, has potent inhibitory activity against the influenza virus, demonstrating a potential medicinal value .

It was found that methylglyoxal showed promising activity against various strains of the influenza virus. The synergistic effect of manuka honey with other viral inhibitors was also observed.

The potent effect of manuka honey when used with common anti influenza drugs such as oseltamivir was again proven in this study; but this time it was also found to be effective even against strains that were initially oseltamivir resistant .

What does this mean?
Methylglyoxal present in manuka honey contributes to its anti-viral effect. It potentiates the action of anti-viral drugs. 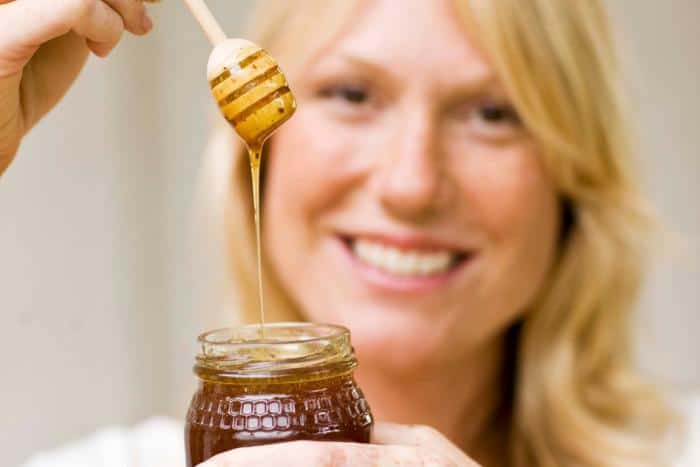 2. Manuka honey can help with symptoms of flu

Apart from the direct effect of manuka honey on the virus that causes influenza, it can also help in alleviating some of the adverse side effects or symptoms of the viral infection. Common problems faced by people suffering from influenza are sore throat, runny nose, fever, coughing etc.

This effect of manuka honey is only palliative and does not help in the actual treatment of the infection, but it provides relief to the patient and makes management of the conditions easier.

What does this mean?
Manuka honey is used as a home remedy in soothing symptoms of flu such as respiratory distress and sore throat.

Manuka honey also has immune boosting properties that enable the immune system to fight against the infection in a more effective and wholesome way while manuka honey also aids in the direct elimination of the virus itself.

They specifically work to stimulate a type of white blood cell present in our body called monocyte, which prevents bacterial, fungal, protozoan and more importantly, viral infections within the body.

When manuka honey works on these cells, they produce certain specific types of compounds called cytokines that regulate different immune cells in the body and control their function. The stimulation of cytokines enables a faster and stronger response of the immune system against the foreign viral infection.

What does this mean?
Proteins present in manuka honey boost immune function and this can help in fighting influenza.

How To Take Manuka Honey For Flu?

Methylglyoxal is present in varying amounts in different kinds of manuka honey. The more the amount present, the more effective the honey will be. UMF (Unique Manuka Factor) rating is a universal system followed world-wide that gives the quality of store bought manuka honey.

Maximum benefits can be guaranteed only for store bought manuka honey that has a rating of 10 or above.

For oral consumption of manuka honey, there is no specific dosage as it is a natural food. A study conducted on people in the age group of 42-64 concluded that honey was safe for regular and frequent consumption and had no observable adverse effects on the normal health of the body .

1 teaspoon manuka honey daily 3 times a day in between meals is recommended for the maximum effect . While manuka honey can also be consumed by dissolving it in cold or lukewarm water, the most effective way to take it is straight from the spoon.

Always check the UMF rating on store bought honey for quality and purity.

Some people may be allergic to manuka honey, especially if there exists already an allergy to bees or pollen. If you’re using manuka honey for the first time, it is recommended that you get a patch test 48 hours beforehand to ensure that there are no adverse allergic reactions.

Consumption of manuka honey is not safe for children under 1 year, as it may cause botulism poisoning .

Diabetic patients may consume manuka honey, but with extreme caution and while keeping a regular check on their blood sugar levels.

The presence of methylglyoxal in manuka honey lends it very potent anti-viral properties and makes it an effective treatment option for diseases such as Influenza.

The strong inhibitory effect of manuka honey on the influenza virus has been a topic of research recently, and the results are promising. The effect is even more pronounced when manuka honey is supplemented along with other well known anti influenza drugs.

Apart from the direct effect of manuka honey, it also provides a boost to the immune system and helps it fight the infection better. It may even provide palliative treatments for some of the common symptoms associated with influenza.

READ THIS NEXT -
Types of Quinoa
Cinnamon and Honey
How Coconut oil Promotes Intestinal Health
Bee Pollen and Multiple Sclerosis : Can it Help?