We research through a large number of reliable information sources to gather insights & data to write our articles. The key references can be accessed by clicking on the links within the article.
Home Superfoods
Facebook
Twitter
Pinterest
WhatsApp
ReddIt

Sinusitis can simply be defined as inflammation of the tissue lining the nasal sinus. Sinus are small, cavities in the skill.

The sinus produces mucus so that they can protect the nasal passage from toxins, allergens and other infection causing organisms.

The blockage further causes trapping of air and mucus inside. This leads to swelling and pain.

Causes of sinusitis include:

These are the most common symptoms of sinusitis:

What is Manuka Honey?

Manuka honey is honey that is produced in Australia and New Zealand. It is a monofloral oil formed from the nectar of the Manuka tree.

It originates from Leptospermum Scoparium, Manuka honey contains hydrogen peroxide, methylglyoxal, and other compounds which give it various properties beneficial to health.

4 Benefits Of Manuka Honey In Sinusitis

Manuka honey helps with sinusitis because of its anti-inflammatory, antibiotic, anti-septic, and anti-infection properties. These properties are exuded because of the components of Manuka honey.

Although all honey is considered to be extremely helpful as an alternative medicine for various health conditions, Manuka honey tops them all.

Manuka honey has an added advantage over other honey as it has a property which is still unknown. It has not been discovered. It is called the Unique Manuka Factor.

The higher the Unique Manuka factor, the higher the antibiotic effect. A rating of “10” in UMF allows the Manuka honey to be dispatched for medicinal use.

Here are the properties of Manuka honey that allow it to act as a cure for sinusitis.

In its pure form, it can inhibit fungal growth itself, whereas, the diluted form can inhibit the toxin production from the fungus.

This study was to understand the benefits of Manuka honey on patients with allergic fungal rhinosinusitis who were not responding to conventional treatment.34 patients with AFRS were taken.

All 34 patients sprayed one of their nostrils with Manuka honey once in the night time for a continuous 30 days. They also continued their regular treatment.

Results showed that out of 34 patients, although Manuka honey did not remove the fungus, it allowed for significant symptomatic relief in the patients. This relief was not provided by the conventional medicine they were using.

Topical application of manuka honey in sinusitis or for nasal irrigation is considered as adjunctive therapy for treatment resistant or recurrent chronic sinusitis.

What does this mean?
Sinusitis can also be caused by virus and fungal infection. Manuka honey has properties that help fight against virus and fungi and help with sinusitis. It considered as viable topical add-on therapy for sinusitis.

One of the main causes for sinusitis is bacterial infection. Manuka honey’s antibiotic property targets just that.

Manuka honey is especially useful for targeting antibiotic resistant bacteria like the ones mentioned above.
It is known to inhibit around 60 types of bacteria. This includes aerobic, anaerobic, gram- positive and gram negative types of bacteria.

Some of the important bacteria include, Salmonella, Shigella, E. Coli, H. Pylori.

The enzyme glucose oxidase, which is synthesized by the bee and catalase in flower pollen converts glucose to gluconic acid and hydrogen peroxide.

Typically, bacteria need around 4.5 pH to grow. It also has a high sugar content (scientifically called osmolarity) which can inhibit growth of most microbes.

It is also known to be hygroscopic. This means that it can take moisture out from its environment. This results in the dehydration of bacteria, killing them.

The amount of antibiotic activity is directly related to the amount of MGO present in the honey. Manuka honey has more MGO than other honeys.

As mentioned before, Manuka honey has some components that exert an antibiotic property, but have still not been discovered. It even inhibits growth of methicillin resistant staphylococcus aureus (MRSA).

The results showed that growth was inhibited when the bacteria was exposed to Manuka honey and methylglyoxal but not artificial honey.

Manuka honey’s bactericidal action on Staphylococcus aureus is found to be beneficial in rhinosinusitis.

What does this mean?
One of the main reasons for sinusitis is bacterial infection. Manuka honey contains many anti-bacterial properties. This is due to its hydrogen peroxide and methylglyoxal content, because of its low pH and high osmolarity, and hygroscopic nature. 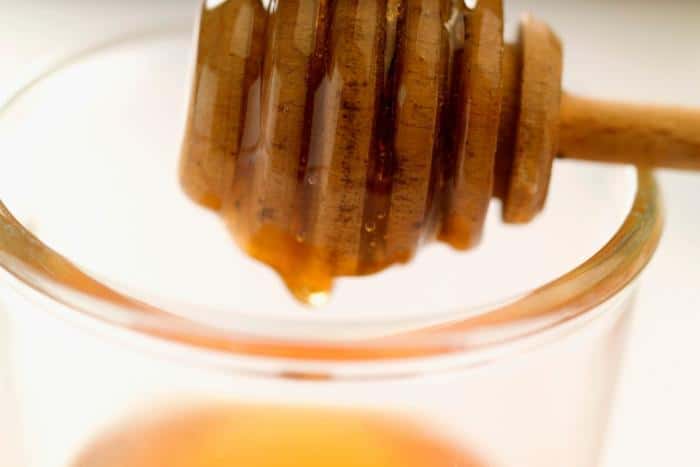 3. Manuka honey is known for its anti-inflammatory properties

Inflammation is a major symptom of sinusitis. It is when the tissues get inflamed that one experiences the pain and swelling.

Manuka honey can target the inflammation due to its properties. A study conducted on animal model of sinusitis reported that manuka honey protected the mucosal lining of the respiratory tract when used intranasally.

However, they promote pro-inflammatory cytokine production so that tissue repair at the site of injury occurs.

This shows that Manuka Honey allows tissue repair with limited amount of inflammation so that the damages of prolonged inflammation do not occur.

These pro-inflammatory cytokines, once activated, stimulate nitric oxide formation. Nitric oxide is another mediator of inflammation.

The flavonoids that are present in this honey can prevent the formation of nitric oxide and the activation of NF-kB.

What does this mean?
Inflammation is one of the main symptoms of sinusitis. Because of Manuka honey’s anti-inflammatory and anti-oxidant property, it can help reduce the inflammation present in sinusitis.

As mentioned above, if the immune system is strong, the chances of sinusitis are less. This is because the body can defence itself against the foreign organisms. Honey can activate the immune system, and help it fight the disease.

Honey improves the immune system by stimulating antibodies in primary and secondary immune response. As mentioned above, it increases the function of various pro-inflammatory cytokines without causing much inflammatory damage.

Also certain compounds have been identified in manuka honey that have immunostimulatory activity. Thus, it provides good immunity for the body.

What does this mean?
The body’s main defence is its immunity. When immunity is compromised, the body can be affected by a variety of infections (bacterial, fungal, viral), which may lead to sinusitis. Manuka honey has properties that help increase the immunity of our body to fight infections.

How to take Manuka Honey for sinusitis?

There are many different ways to add Manuka honey in your daily routine. Its safety has been tested in a study conducted on 20 healthy individuals between the ages of 42 and 64 years.

The study concluded that regular consumption of manuka honey (approximately 20g) had no adverse effect on the health of their subjects and is perfectly safe .

Take one teaspoon of Manuka honey 2-3 times a day orally to treat sinusitis. You can also mix it with a dash of cinnamon powder in lukewarm water and consume it.

Taking a combination of manuka honey and ACV in water is said to benefit in sinusitis. Even manuka honey mixed with lemon juice helps.

For intranasal application you can take 1 cup distilled or boiled water and 1 tsp of manuka honey to it and use this combination for nasal irrigation via a neti pot. Consult a naturopath about this.

For intranasal application manuka honey based nasal spray and sinus rinse are available; consult your doctor prior to using them.

Although Manuka honey is a natural product, it can have some side effects or complications. To minimize the negative effects, follow these precautions:

The treatment mentioned above cannot act alone. It is an add-on to the medical treatment for sinusitis. Do not replace this treatment with regular allopathic treatment. If symptoms get worse, consult a doctor.

To minimize the risk of allergy, use Manuka honey produced nearest to you and also conduct a patch test prior.

Do not use processed honey, always use raw, organic Manuka honey. Ensure that manuka honey has a UMF rating of 10 or above.

Consumption of manuka honey is not safe for children below the age of 12 months, due to the risk of botulism poisoning.

A diabetic patient should consult a doctor before the usage of honey and needs to monitor their intake of honey.
Do not drink anything around 30 minutes after having Manuka honey

Manuka honey can improve sinusitis caused by various reasons. This is because of its various properties like anti-microbial, anti-inflammatory, and immunity developing property. It can be used as add-on therapy for sinusitis.