Menopause is a natural process that occurs in a woman, where she no longer menstruates.

A woman is said to be in menopause if she hasn’t undergone her menstrual cycle for 12 months in a row. This usually happens at the age of 48-55 years, and the average age is 51 years.

Menopause is found to be accompanied by various symptoms apart from irregular periods. Some of these symptoms are hot flashes, night sweats, insomnia, vaginal dryness, etc.

The estrogen and progesterone (hormones) levels are dropped post-menopause. This may lead to a postmenopausal woman being at the risk of osteoporosis, heart disease, glaucoma, etc.

The survey shows that around 37.5 million have reached or are in menopause. Due to current lifestyle, 1% of menstruating women reach menopause below the age of 40 years.

Naturally sweet drink, “Coconut water” is found to be blessing for these women by the researchers.

What is Coconut Water?

Coconut water is the clear liquid present in the coconut which in turn is obtained from the coconut tree.

Coconut tree which is scientifically known as Cocosnucifera belongs to the palm family and is predominantly grown in Southeast Asia.

The water is assimilated by the tree’s root from the ground to the fruit.This liquid present in the fruit is the endosperm. Endosperm is a tissue, present in many seeds that provide food/nutrition to the developing embryo.

This is found to be in liquid form in young green coconuts and later develops into creamy white tissue as the endosperm divides and eventually gets deposited on its inner surface.

Now as we know about coconut water, let’s see how it is beneficial for postmenopausal symptoms. 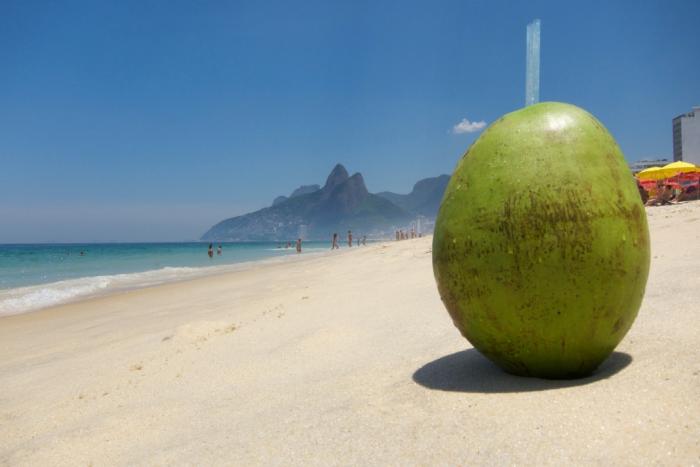 These benefits are discussed in detail below-

It has been found that after menopause, women are at a higher risk of developing osteoporosis (a condition in which bones become weak and brittle).

The animal model was made to consume coconut water and later analyzed after 6 weeks. Results indicated high bone mass and bone formation rate.

Thus, overall bone mineral density increases and hence the risk of osteoporosis can be avoided by consuming coconut water.

This may be because of the presence of micronutrients in coconut water that help to boost antioxidant defenses in the body and prevent lipid peroxidation. However, the exact reason is not known.

Oxidation of cells releases free radicals which cause cell damage and also peroxidation of lipids present in the cell membrane.

Antioxidant, on the other hand, ceases oxidation of cells thereby preventing these consequences.

Thus the free-radical induced bone loss is prevented. Also, as the bone remains strong, the risk of osteoporosis can be avoided.

What does this mean?
The presence of micronutrients in coconut water helps to enhance antioxidant function and hence retain bone density which is affected by the action of free radicals.

Postmenopause, many hormonal changes occur in a woman who may lead to some degenerative diseases of nervous system.

According to a study, Coconut water has been found to be effective in protecting women from the risk of degenerative nerve diseases.

The study was done on an animal model.The results implicated a significant reduction in neuron (nerve cells) cell death which otherwise is the cause of many degenerative nerve diseases.

Researchers deduced that this is because of the presence of estrogen-like properties in coconut water, although it is still under study.

What does this mean?
Coconut water exhibits neuroprotective effects because of the presence of estrogen-like properties in it. This effect prevents many degenerative nerve diseases.

The renal function gets degraded post menopause as the bone mineral density decreases postmenopause. However, it is still under study.

Consuming coconut water is found to be beneficial in improving renal function and removing kidney stones.

A study carried out on an animal model of kidney stones revealed that consuming coconut water reduces the stone size and also protects against impaired renal function.

The attribute goes to the presence of a good amount of potassium in coconut water that helps in alkalizing urine to dissolve kidney stones.

What does this mean?
The prophylactic (preventive) effect of coconut water in reducing kidney stones and improving renal function is due to the presence of potassium in it.

4. Coconut water helps to deal with risk of liver diseases

As many hormonal changes occur during menopause like declining of estrogen levels, cellular senescence, etc., these cause a risk of liver disease.

Consumption of coconut water protects from liver damage as evident from the study conducted on an animal model.

It was found that coconut water prevents oxidative stress and lipid peroxidation of liver cells due to the presence of antioxidant booster compounds as mentioned previously.

What does this mean?
Coconut water consumption helps to protect liver damage (hepatoprotective) due to the presence of antioxidant booster micronutrients.

It has been found that postmenopause, the immune system of women gets weakened and hence they become prone to infections easily.

Studies on coconut water have shown that it has many anti-microbial properties that make it effective against infections.

In the study, three peptides ( a long chain of amino acids) were isolated from coconut water. Results implicated that they were effective in killing many gram positive and negative bacteria.

Hence consuming coconut water can be beneficial in preventing bacterial infections and keeping the body healthy.

What does this mean?
The presence of antimicrobial property in constituents of coconut water makes it effective against many bacterial infections.

There is no prescribed dosage of coconut water for postmenopausal symptoms. It can be included in the diet and consumed as 100-200ml per day.

Coconut water can often be supplemented with other food items to enhance the benefits.

Consuming coconut white meat along with coconut water at least once a week has been found to have further positive effects.

Other supplementary food items like kefir and vegetable juices can also be consumed along with coconut juice.

There are a few things to keep in mind while consuming coconut water.

It was found that the high-dosage of coconut water results in pro-inflammation. As the loss of immunity occurs post-menopause, high quantity consumption should be avoided.

Coconut water has a good amount of potassium present in it. Consuming excess of coconut water may lead to access to potassium levels in the body.

The high amount of potassium leads to the breakdown of muscle cells and also kidney diseases.

If taking any medications, avoid taking coconut water close to the time of taking medicines. Maintain a 3-4 hour gaps.

If suffering from any serious health condition or if you have been advised to avoid certain minerals in the diet, please consult a health practitioner before consuming coconut water.

Coconut water is a naturally sweet drink that can provide numerous benefits to women in dealing with postmenopausal symptoms.

The neuroprotective and hepatoprotective activity of coconut water helps to prevent the risk of degenerative nerve diseases and liver diseases respectively.

Also, it helps to enhance the bone mineral density due to the antioxidant effect thereby preventing osteoporosis.

Overall, consumption of coconut water is quite beneficial to women postmenopause.