Goji Berry is also known as wolfberry, lyceum barbarum, gi zi, gou or Fructus Lycii. This evergreen shrub grows predominantly in the subtropical and temperate regions of China, in the Himalayan regions of Tibet and Mongolia.

Goji berry plants grow to a height of 1-3m (around 15-20 feet).  These deciduous, perennial and woody plants are found mainly in south China, some parts of Asia and southeastern Europe.

The Chinese regions cultivate around 42% of the world’s goji berry stock. The remainder is cultivated in Nepal and India. Goji berry has been used by the Chinese for over 6000 years although the western world has only discovered it recently.

The plant is said to resemble a tomato creeper or a grape vine. According to legend, during the Tang Dynasty in China (800 A.D), a goji berry vine was growing near a well right next to a Buddhist temple. As the berries ripened, they fell into the well from which the monks drank water and cooked their food.

Soon, it was found the monks from this temple lived very long and healthy lives and the conclusion was that the benefits came from this humble fruit.

This plant is so revered for its benefits, that people living in the valley regions of Mongolia and Tibet set aside two weeks at the end of each year to honor this tiny orange-red berry. This is not so surprising since the Ninxia Northern Chinese region has more centenarians (16 times greater) than other regions of China or indeed the rest of the world.

The leaves grow in clusters of 3 and have blunt, rounded tips. The flowers have bell-shaped sepals. Goji berries have an ellipsoid shape and are bright orange-red in color. In the Northern hemisphere, the berries are ready to harvest between July-October.

Goji berries have a tangy sweet and sour flavor. They have a chewy texture and shape which resembles raisins.   When the fruit is ripe and juicy, it is picked and dried in the sun before being packed as dried fruit or processed into juice and other supplements.

The berries are very delicate and handpicking them can destroy them. Hence, the vines are gently shaken and the fruits are carefully gathered. 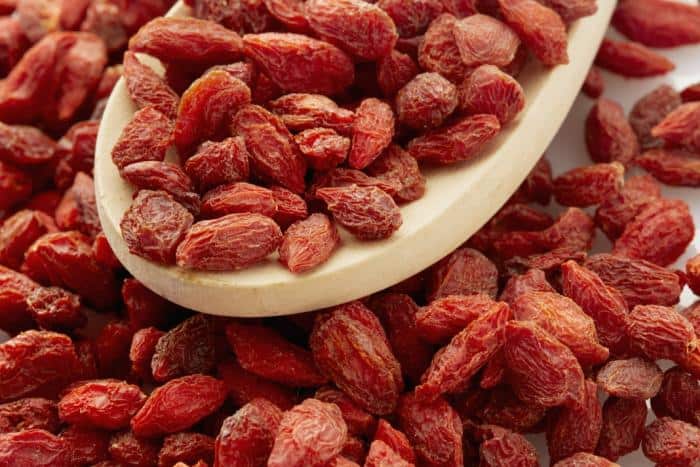 A detailed analysis of the chemical and nutritional composition of goji berry was conducted by the Beijing Nutrition Research Institute in 1988.

This study concluded that this berry was packed with a wide range of minerals, vitamins, amino acids, proteins, phytonutrients and essential fats.

The following is a brief chemical composition of goji berry. It is rich in Vitamins A, C, B1, B2 and E. It contains polysaccharides, 19 amino acids, potassium, magnesium, calcium, iron, zinc, selenium, manganese, and 21 other minerals. It has higher levels of beta-carotene than carrots and more protein concentration than bee pollen.

It has powerful anti-inflammatory, anti-bacterial and anti-fungal agents. It contains natural compounds that can boost the immune system. Among foods, goji berry has the highest anti-oxidant rating, even higher than Vitamin E oil, pomegranates, blueberries and raspberries.

Goji berries have come into prominence in the west since the turn of the 21st century for its powerful anti-oxidant benefits and rich nutrient value. It has been deemed a ‘superfruit’ and there is a wide variety of consumer products made with goji berry available.

The anti-oxidant properties of goji berry means that it can fight free radicals, prevent cancer, heart disease, lower cholesterol and boost the immune system, therefore protecting the body from various other illnesses.

The vitamin A content in goji berries has anti-aging properties and can protect vision. Goji berries improve memory and athletic performance, provide a feeling of health and well-being. By boosting brain health, they can protect us from illnesses like Alzheimer’s.

Goji berries improve fertility and sexual function. They improve circulation, strengthen legs and protect the liver. Studies have found that using goji berries along with other cancer treatment regimen meant that patients responded better to their conventional medications.

Some other benefits include increase in energy, promote the production of human growth hormone, lower blood pressure and protect DNA from harmful toxins.

Ways to use Goji Berry

Goji berries are used extensively in Chinese cuisine and traditional Chinese medicine. It is eaten raw, added to soups, used as liquid extracts or brewed into tea,   made into wines, medicines or juices.

Goji juice is popular in regions where the plant grows. It is generally mixed with tea to make a delicious herbal tonic drink.

Goji berry supplements are also available although there is no research to know if these are more powerful than the actual fruit.  Chinese food stores, health food stores and online stores are place where you can find goji berry products especially if you do not live in regions where it is grown.

Those who wish to enjoy its benefits can purchase teas, pure juice, goji juice mixed with other fruit juices or water, goji extract made into capsules, goji granola cereals, crunch bars and so on. Goji has a delicious taste, comparable to raspberries, cranberries and strawberries and can even be consumed raw.

Goji berries do not produce too many side effects. When taking herbal supplements always consult a doctor for there could be some herb drug interactions or drug interactions with blood thinner, blood pressure and diabetes medications.

Those who have pollen allergies must avoid this fruit. Eaten in moderation, goji berries provide numerous health benefits.

So, enjoy the powerful health benefits of goji berry by adding a handful of berries to your daily diet.