We research through a large number of reliable information sources to gather insights & data to write our articles. The key references can be accessed by clicking on the links within the article.
Home Superfoods
Facebook
Twitter
Pinterest
WhatsApp
ReddIt

Diabetes is a health condition that includes Diabetes Insipidus(DI) and Diabetes Mellitus(DM).

Diabetes insipidus is caused due to the kidney’s inability to respond to Anti Diuretic Hormone (ADH).

ADH is a hormone secreted by the hypothalamus; it is responsible for regulating and balancing the amount of water in the blood.

Diabetes mellitus can be further categorized as Type 1 and Type2. Diabetes mellitus is characterized by high blood glucose levels, insulin resistance and lack of production of insulin. Insulin is secreted by the β cells in the pancreas.

The cause of Diabetes can be genetic or can be a result of an unhealthy lifestyle. Diabetes is a chronic disease.

People diagnosed with Diabetes need to take care of their diet and health overall in order to not spike the levels of glucose in the blood.

If the disease is not kept under check it may lead to further complications like cardiovascular defects, gangrene, and retinopathy.

The best way to avoid any further complications is to have good food and a healthy lifestyle. Chia seed is one such super food which helps manage diabetes.

What are Chia Seeds?

Salvia hispanica, the plant species whose seed is categorized under the umbrella of Super Foods, is native to the central and southern regions of Mexico and Gautemala.

Chia as the plant is popularly known as a major commodity in pre-Columbian Mesoamerica. Historic and economic studies have made it evident that Salvia hispanica or Chia was as the staple food of that region and was given even more importance than maize.

The plant has been considered to have medicinal values since the times of the Aztecs.

Chia seeds also are a source of proteins, fats, carbohydrates, minerals, vitamins, and high dietary fiber. Chia seeds do not contain gluten. Gluten is considered to be harmful to those suffering from celiac disease.

Chia seeds can act as a substitute for gluten-rich wheat and other food grains like barley, rye, and oats.

As most of the nutritional needs are met by this single plant seed hence it is considered to be a Super Food.

Chia seeds are a nutrient powerhouse and here is how they benefit in diabetes:

A study conducted on animal models to investigate the blood sugar reducing the effect of chia seeds.

It was observed that consumption of Chia seeds on a regular basis had good digestibility and it had a hypoglycemic effect (Less Blood Sugar).

A clinical trial was conducted to assess the effect of the inclusion of chia seeds on blood sugar levels.

2. It is rich in Omega 3 that controls insulin levels

Chia seeds are a rich source of α linolenic acid.

Insulin is a hormone produced by cells in the pancreas, they help in regulating blood sugar.

Insulin resistance is a condition in which the cells fail to respond to insulin and thus increasing blood sugar levels.

What does this mean? Chia seeds are rich in omega 3 fatty acid ALA. Apart from multiple benefits of ALA , it also helps in reducing insulin resistance and improving glucose metabolism.

Dietary fibers have an ability to retard the digestion of food and absorption of nutrients has a great effect on how lipids and carbohydrates are broken down in the body.

The fiber content and physical form of food have an influence on the interactions between digestive enzymes and thus delays the process of absorption and digestion.

The high fiber content of Chia seed also slows down the conversion of carbohydrates into sugars and helps to keep the blood glucose at normal levels.

What does this mean? As the high fiber content in Chia seeds slows down the digestive process, inclusion of Chia seeds in one’s diet will certainly help in maintaining low blood sugar levels. . A balanced increase in consumption of fiber-rich foods and unsaturated fat is the best way to replace foods rich in saturated fat and cholesterol and curb diabetes. 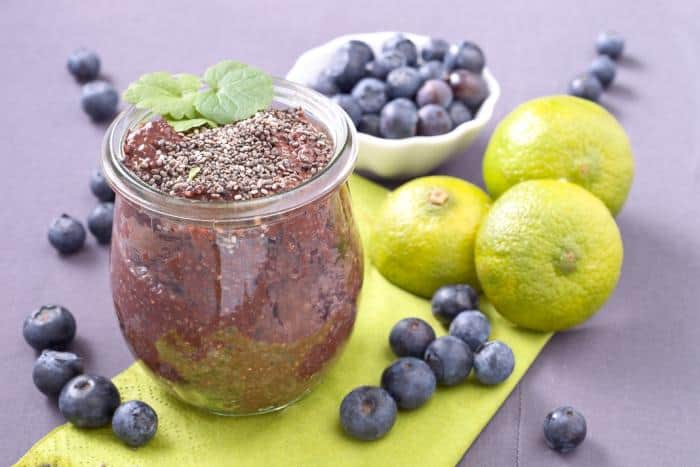 The underlying cause of insulin resistance which leads to Diabetes is still not clear. Recent studies have shown that inflammation causes insulin resistance, as the immune cells of the body invade the insulin-producing cells in the pancreas.

They regulate the secretion of pro-inflammatory chemicals from the immune cells.

What does this mean? The anti-inflammatory properties of the constituents of the Chia seeds help safeguard the insulin producing β cells of the pancreas from the cytokines (chemicals released by immune cells) which cause inflammation and damage the cells.

High blood sugar levels promote the auto-oxidation of glucose to form free radicals. Oxidation can be said to be a process of burning of a molecule.

The by-products of this burning are free radicals which need to be checked on.

Some studies have made it evident that oxidative stress may increase insulin resistance or impair insulin secretion thus causing Diabetes.

The inhibition of intracellular free radical formation would help reduce oxidative stress. The compounds present in

What does this mean? It is seen that oxidative stress is related to high sugar levels and insulin resistance. Intake of Chia seeds which are proven to have anti-oxidative properties will prove therapeutic against oxidative stress.

A lot of other complications arise due to the increase in blood sugar levels and the failure of cells to respond to insulin.

The heart, liver and kidney health is affected which later affects the functionality of other organs.

They do so by reducing the influx of fatty acids and improving the breakdown of glucose in the cardiac muscles.

Inclusion of Chia seeds in your daily diet will prove to be beneficial in the long run. Daily intake recommendations for adults are 18-20 gm daily.

Since chia seeds can be a new introduction into the diet, first we must experiment by taking only a small amount and checking for any allergic reactions.

Also, since it is high in fiber, suddenly including too much of chia seeds in our diet may lead to flatulence and constipation.

It is best to consume ground chia seeds or soaked chia seeds. Avoid consuming water immediately after consuming dry chia seeds as it may cause swelling and choking.

Chia seeds are a source of many essential nutrients required to maintain good health.

Their constituents and active compounds help limit the risk of diabetes due to their anti-inflammatory, anti-oxidant properties, and high fiber content.

The best way to maintain blood sugar levels is by proper diet and exercise. Chia seed is one such food that will help manage diabetes.