Hypertension is characterized by an extremely high blood pressure of 140 over 90 mm of Hg.

It is caused to lifestyle factors such as physical inactivity, consuming a diet high in salt, processed foods, alcohol, etc.

Stress is also a significant factor that influences hypertension. It is a long-term medical condition in which blood pressure remains elevated for a long duration.

High blood pressure affects 15-35% of the global population and for 18 % of deaths.

Over time high blood pressure severely damages arterial walls if it is persistent.

Patients are thus administered drugs to combat hypertension and are instructed to bring about dietary as well as lifestyle changes in order to reduce complications.

What we eat can highly affect or modify hypertension.

A diet low in sodium, fat coupled with some daily cardio (exercise) can lower blood pressure and its associated risks.

One significant component that can be included in the diet to lower cholesterol is Argan oil.

Argan oil is extracted from the kernel of Argan tree.

This plant is endemic to Morocco, but due to globalization, it has hit markets all over the world. This has made it possible for everyone to have access to it.

The most popular type of argan oil is the cold-pressed type that is often extracted from roasted kernels.

They don’t undergo any heating modifications as such. It has a vibrant nutty flavour and enhances the taste of food.

It can also soften hair and restore moisture, hydrating it. This keeps hair healthy and gives it a shiny appearance.

3 Benefits of Argan Oil In Hypertension

Argan oil helps in the reduction of blood pressure and cholesterol levels in hypertension patients. It is also known to help in benefits diabetes-related hypertension. 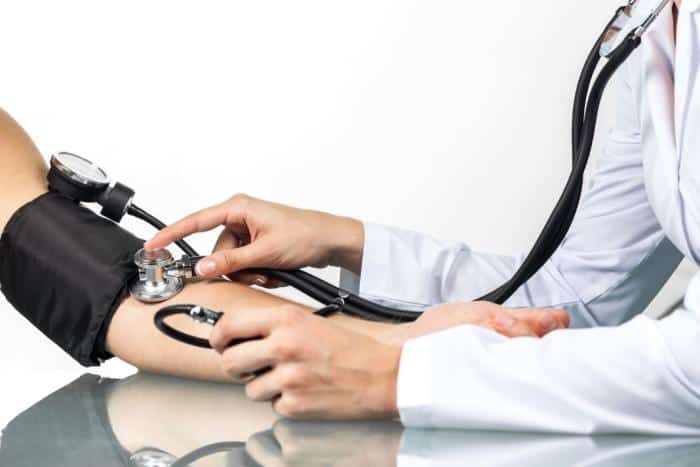 In a study conducted in 2000, an animal study was conducted to assess the effect of argan oil in hypertension and hypercholesteremia.

A significant increase was found in the level of HDL cholesterol or good cholesterol.

Oleic and linoleic acids present in argan oil can help manifest antihypertensive effects. They are unsaturated fatty acid and are generally attributed to lowering blood pressure.

What does this mean? Argan oil by its antioxidant effect helps lower blood pressure.

When the heart pumps blood through the arteries at high pressure, the walls of arteries can get damaged due to which plaque can build up in the lumen of the arteries.

This plaque can consist of WBCs, cholesterol, and triglycerides.

Hypertension thus can give rise to atherosclerosis.

This deposition can narrow the lumen of the blood vessels due to which the heart is forced to pump blood at higher pressure.

This can strain the heart and can cause strokes, heart attack.

In a study that was conducted involving sixty men, diets were regularized in order to make sure all the participants received the same type of nutrition.

They were also asked to include 25 g of butter in their diet for a duration of 2 weeks. After this, they were randomly divided into 2 groups.

One that consumed olive oil, while the other group consumed argan oil. This had to be done in a controlled regular manner for 3 weeks.

Both the groups were asked to consume 25ml of their assigned oils. Scientists at the end of the study found that the susceptibility of LDL to oxidation decreased in both the groups.

There was also a decrease in the formation of peroxides and other oxidants. The level of Vitamin E concentration significantly only in the group that consumed argan oil.

In another animal study, animals were fed a diet consisting of argan oil. At the end of the 7-week treatment, total cholesterol decreased by 36%, The level of LDL and triglycerides too decreased. There was also an observed decrease in the body weight.

MUFA and PUFA have known to lower the risk of cardiovascular diseases. They substitute saturated fatty acids present in the system and lower their concentration.

Argan oil is also rich in plant sterol. Sterols have structural similarity to that of cholesterol. Due to this, they lower the amount of absorption of cholesterol from the lining of the small intestine.

Tocopherols present in argan oil can exhibit antioxidant effects that lower the susceptibility of LDL to oxidation. This can induce hypercholesteremic effects.

Alpha-tocopherol present in argan oil also has the ability to lower cholesterol.

What does this mean? Atherosclerosis manifests due to high blood pressure/hypertension. Argan oil could lower blood pressure as well reduce plaque formation by decreasing the level of total serum cholesterol. This is beneficial for hypertensive patients on the verge of developing hyperlipidemia. It can lower the risks of cardiovascular diseases by lowering the levels of total serum cholesterol.

3. It benefits in diabetes-related hypertension

Diabetes is marked by persistently elevated sugar levels. Insulin is a hormone secreted by the pancreas that lowers the blood glucose level i.e. it direct cells increase glucose uptake.

Diabetes occurs due to the failure of the body to respond to insulin or inadequate production of insulin.

The most common type of diabetes is type 2 diabetes that is caused by genetic factors and lifestyle choices. hypertension is correlated.

People having type 1 and type 2 diabetes often undergo their blood pressure that could give rise to hypertension.

Having hypertension as well diabetes can increase the risk of cardiovascular diseases manifold.

In fact, According to the American heart association, the risk of having cardiovascular diseases almost doubles with diabetes .

Diabetics often experience circadian changes in their Blood pressure. Several factors are responsible for this observation.

Hypertension coupled with diabetes can also give rise to phenomena of diabetic dyslipidemia (irregular cholesterol levels).

In an animal study, an animal model of diabetes, argan oil effect on diabetes and metabolic health was evaluated. Parameters such as blood pressure, insulin levels and oxidative stress were evaluated.

At the end of the treatment, the study demonstrated that argan oil reduced glucose levels, decreased insulin resistance and attenuated the elevation of blood pressure. It also nullified oxidative activity.

In another animal study treatment with virgin argan oil reduced insulin resistance and hyperglycemia (high glucose level). A decrease in the blood pressure was also observed.

In diabetics, unutilized glucose present in the blood undergoes oxidation. Lipid and membrane proteins also undergo oxidation. This increases the number of reactive oxygen species in the system.

Oxidative stress occurs when there is an imbalance in the number of reactive oxygen species (ROS) and antioxidants that cancel it.

Hence, antioxidants play a great role in people having diabetes to delay complications. Oxidative stress can damage cells and tissues and is an underlying reason for the occurrence of nephropathy (kidney damage), Neuropathy (nerve damage etc) .

Argan oil is rich in antioxidants such as tocopherols. Tocopherols have a vitamin E action. They combat oxidative stress and increase or enhance glucose utilization and help improve the body’s response to insulin.

It is also rich in beta carotenes that is a powerful antioxidant and acts as a scavenger to eliminate ROS.

This can help bring cholesterol levels to normal and eliminate dyslipidemia associated with diabetes.

What does this mean? Argan oil can reduce hypertension associated with diabetes and further help regulate blood glucose levels that can diminish the risks of cardiovascular diseases. It is rich in PUFAs MUFAs and antioxidants that simultaneously work together to provide multi-benefits to the individual consuming it.

Normally, virgin argan oil is used even for culinary purposes. This term indicates that the oil has not undergone any heating treatments.

Argan oil can be used as a side to pita bread, added to dishes after they have been cooked and used as a dressing for salads.

Its authentic taste can give a vibrant flavour to the food.

However, it is not recommended for prolonging frying. It is advisable to consume 15ml of argan oil daily in order to reap maximum benefits.

Argan oil contains oleosins, a family of compounds also found in sesame and peanuts that can induce possible allergy.

Thus, those allergic to either peanuts or sesame must consult with a dietician prior consumption.

It can also regulate blood pressure to keep it normal.

READ THIS NEXT -
Benefits of Argan Oil for Hair
Bee Pollen and Prostate Health : Can it Help?
Coconut for Constipation
5 Evidence Based Benefits of Manuka Honey for Stomach Ulcers
25 Science Backed Health Benefits of Spirulina
Brown Rice Vs. Quinoa