A healthy lifestyle is key to a healthy heart.

However, with the prevalence of junk food around us and the sedentary nature people tend to have, heart problems are on the rise.

It is essential to find ways to keep yourself fighting fit despite a busy schedule. So, it comes as a pleasant surprise that cocoa provides a means to achieve this.

Cocoa consumption has often seen to be accompanied by the relaxation of blood vessels and easier blood circulation.

These are just some of the ways that it reduces the risk of cardiovascular disease. Before we get to the benefits of cocoa for heart health, let’s understand our superfood cocoa better. [1]

It is most popular for its unique flavor found in chocolates and confectionary items.

Given its extensive use in desserts, it may be quite shocking to consider that it was used for its medicinal properties historically.

Scientists have recently rediscovered use as a pharmacological agent as it is an excellent antioxidant.

It has also been seen to protect body cells from damage and prevents allergic reactions. [2]

Cocoa has been found to aid conditions like high blood pressure, cholesterol, and obesity.

Increasing scientific evidence is indicative of its ability to act on damaged or aging blood cells and repair them.

Some of the benefits of using cocoa to obtain good health been listed as follows: 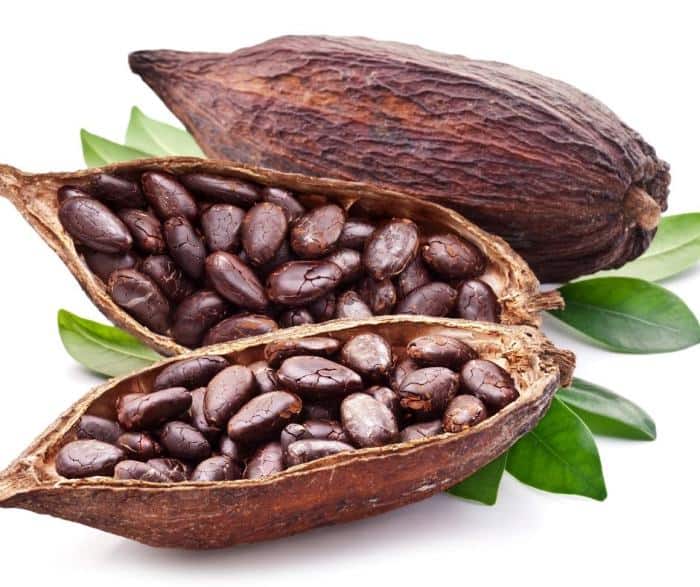 In 2008, the American Journal of Clinical and Nutrition published a study which was based on the use of dark chocolate in a group of overweight adults.

It was carried out using 45 healthy adults to examine the effect of the cocoa on their endothelial cells (inner lining of blood vessels).

Through the usage of various molecular biology methods, measurement of the extent of structural changes in blood vessels post inclusion of cocoa in the diet was determined.

They saw that cocoa could curb blood pressure in overweight adults. Endothelial dysfunction (an imbalance between constriction and dilation of blood vessels) was significantly reduced in the cocoa treated group.

The best results were seen through sugar-free forms of cocoa. [3]

Grassi D later discovered that flavonoid compounds in the cocoa are responsible for such activities brought about from its administration. [4]

What does this Mean? Through the administration of cocoa, blood pressure of overweight individuals was significantly brought down through improved endothelial function.

Arteriosclerosis is a condition wherein arteries gradually harden and lose its ability to pump blood efficiently.

Over time, this may lead to the development of cardiovascular problems.

The evidence of such abilities was provided through West SG et al.’s study which showed that cocoa could aid with blood flow and reduce artery stiffness when tested in a group of 30 overweight adults for a 4-week period. [5]

What does this Mean? Cocoa could be potentially used as to eradicate signs of stiffness which causes the resistanceof blood flow through arteries.

Considering the growing popularity of the compound and its increased usage, scientists decided to analyse its efficiency in reducing cardiovascular risks.

This study was conducted to evaluate the effects of flavonoids in cocoa on vascular functions.

It was seen that the concentration of the lipids and cholesterol was brought down significantly along with lowering the rate of cell adhesion.

This was achieved through modulation of expression of proteins by the flavonoids present in cocoa. [6]

However, such results can only be obtained through prolonged consumption as a similar Clinical Science study which only administered cocoa for a short period did not have similar effects.[7]

What does this Mean? Since the flavonoid compounds present in cocoa are capable lowering lipids and cholesterol, it has the potential to be used for atherosclerosis treatment.

4. Cocoa can Enhance the Benefits of Exercise

Despite a lot of strenuous physical activity, certain individual’s bodies are not fully susceptible to the effects of the exercise they put in.

Dark chocolate can help give this required boost to body cells.

Blood pressure was brought down significantly along with reduced weight gain in the tested obese subjects. [8]

What does this Mean? Experimental trials with cocoa have shown positive results with respect to enhancement of cardio sensitivity to exercise.

Lowering of blood pressure is essential to preventing the development of heart problems. To achieve this, blood flow rates need to be monitored.

The results obtained from this study showed that cocoa could produce benefits in artery movement that could lower blood pressure and ease blood flow.

Through their experiment, they determined that dark chocolate flavanols could indeed lower blood pressure for short periods of time. [9]

What does this Mean? The flavanols in cocoa possess blood pressure lowering properties. It monitors blood flow enabling it a useful to treathypertension.

Erdman JW Jr and Carlson L conducted a study in 2008 which revealed that the antioxidant chemicals found in cocoa had a pivotal role to play in its heart-strengthening activities.

Through analysis of epidemiological data, they determined that flavanols which are unique to cocoa are the main cause of its ability to fight markers of diseases.

This provides a suitable means to prevent the damage incurred to the body by thrombosis (blood clot in a vein) or atherosclerosis (fat build up along artery walls). [10]

What does this Mean? The use of cocoa provides a potential remedy for atherosclerosis. It lowers lipid oxidation rates in blood plasma cells.

7. Cocoa is a Powerful Antioxidant

Inflammation of artery walls and accumulation of free radicles are major contributors to a process called atherogenesis.

This is the process by with adhesion of cells occurs along the endothelial surfaces of the arteries. Over time, this forms harmful plaque.

Studies have indicated that cocoa plays an active role in halting artery-damaging processes mediated by oxidative stress as well. This is primarily due to the flavanols present in it. [11]

What does this Mean? Cocoa could be potentially used as to eradicate harmful free radicles which cause the resistanceof blood flow through arteries. It reduces oxidative stress along with improving anti-inflammatory enzyme activity.

8. Cocoa Protects the Heart from Damage

Heart problems can arise as a direct effect of plaque accumulation along the arteries, for instance, Ischemic heart disease or heart attacks.

It is believed that cocoa protects heart function by modulation of several molecular mechanisms.

This was investigated by Mehrinfar R and Frishman WH where they saw that the chemical in cocoa, flavan-3-ol was highly useful in preventing pulmonary and cardiovascular disorders. [13]

What does this Mean? The administration of cocoa activates the behavior modulating mechanisms in the arteries. This ability to manipulate cell signals and reactions imparts the cardioprotective ability to the compound.

Thrombosis is the process by which blood clots occur in veins, this obstructs blood flow and is detrimental to heart health.

Thankfully, cocoa can help with this condition too. The 2014 Thrombosis and Homeostasis study highlighted the antiplatelet activity of the compound which helps in this mechanism.

This means that cocoa does not allow cell adhesion to take place thereby preventing clot formation.[14]

What does this Mean? Cocoa prevents thrombosis and drives away other risk factors for cardiovascular disease.

Dosage of Cocoa For Heart Health

The main goal behind the consumption of cocoa or dark chocolate is to optimize the number of flavanols taken in by the body. Further research is required to determine the optimal dose.

However, at present, 25-40g of dark chocolate containing 85% cocoa is recommended. Milk and white chocolate do not act as suitable sources of cocoa. [15]

Scientists are still researching the full scope and outcomes of uses of cocoa in our diet. The pathways through which it modifies cell signals and blood flow are still poorly understood.

It is, therefore, best to consult with a healthcare professional first before initiating regular cocoa consumption. [16]

A couple of precautions to note

1. Cocoa can cause allergy

2. Cocoa may cause anxiety

3. Cocoa can have drug interactions

4. Cocoa can trigger a migraine headache

Cocoa may trigger a migraine headache in some susceptible individuals due to the presence of a natural chemical, tyramine.

The presence of oxalates in cocoa can increase the urine excretion of oxalates and thus, promote kidney stone formation.

6. Cocoa should be avoided in bleeding disorders

Caffeine content of cocoa can worsen the symptoms of IBD (inflammatory bowel disease) such as diarrhea, in large amounts.

8. The high amount of cocoa is not safe for pregnant and breastfeeding women

The high caffeine content can increase the risk of miscarriage, premature delivery or low birth weight in pregnant women.

Through the above studies, we can see that cocoa offers a variety of benefits for heart health.

As such, scientists are now trying to use the compound to develop formulations to aid hypertension and other cardiovascular problems.

Therefore, it is advisable for patients suffering from heart disease to try cocoa.

READ THIS NEXT -
4 Benefits of Kelp for Weight Loss & Obesity
How Aloe Vera Helps with Wrinkles & Keeps Your Skin Young!
Benefits of Cinnamon Leaves
6 Proven Benefits of Spirulina For Thrombosis
Can Manuka Honey Help In Diabetes?
FlaxSeeds Vs. Chia Seeds: Which One Should You Choose?