Delayed Onset Muscle Soreness or DOMS is the pain, tenderness and stiffness in muscles following rigorous or sudden exercise.

This muscle ache happens in exercises where the muscles are contracting and lengthening at the same time. For example, downhill running and long distance running, etc.

The muscles may lose strength, movement and functioning due to swelling and inflammation that follows DOMS.

These drugs have a negative impact on the liver and also stunt muscle growth. Ice packs are used for initial pain relief.

The tissue injury in DOMS can be healed and prevented with the help of natural products such as Aloe vera which is known to heal and repair cells of the body. 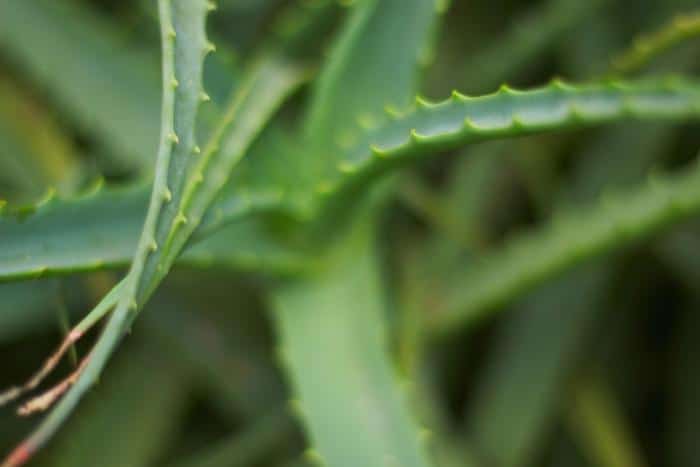 4 Benefits of Aloe Vera for DOMS

It benefits the patients of DOMS in the following ways:

1. It is Anti-inflammatory in nature

After any injury or infections, the body responds naturally by inflammation.

Our body produces prostaglandins by cyclo-oxygenase pathway that causes inflammation and pain. They mediate immune cells at the injury location, that leads to swelling and redness in the area.

Aloe vera inhibits this pathway and reduces the formation of prostaglandins (inflammatory agents).

It also possesses peptidase bradykinase that breaks down bradykinin, an inflammatory and pain-causing substance that plays a key role in the development of DOMS.

The sterols in aloe vera such as Lupeol, campesterol, cholesterol, and β-sitosterol are all anti-inflammatory in nature, relieve pain and act as a natural analgesic.

The polysaccharide mannose-6-phosphate in Aloe vera has anti-inflammatory and wound-healing properties.

Presence of other compound like C-glycosyl chromone and hormones likes Gibberellins, which are anti-inflammatory compounds, make Aloe vera a stronger candidate for reducing of inflammation.

What does this mean? The inflammation and pain caused by DOMS can be treated and relieved by Aloe vera as it is a store house of various anti-inflammatory compounds.

2. It is a good anti-oxidant

The inflammation and immune response as a result of tissue damage in DOMS, causes neutrophils to migrate to the injury site and initiate repair.

These free radicals are capable of further damaging the cell membranes.

Anti-oxidants are required at the site to neutralize the free radicals and prevent further tissue damage.

An imbalance between antioxidants and free radicals in the body causes oxidative stress.

Numerous studies boast of the antioxidant nature of Aloe vera and it has been shown to reduce or prevent the damages that are caused by free radicals or oxidative stress.

Aloe vera has an inhibitory effect on the production of free radicals On encountering free radicals, it is able to remove them.

It contains various antioxidants such as vitamin E, vitamin C, flavonoids and tannins.

The phenolic content in Aloe vera makes it a good antioxidant.

What does this mean? Anti-oxidant activities of Aloe vera can be used to prevent further tissue damage in DOMS affected muscles.

3. It has a hydrating and cooling effect

Hydration is an important requirement for tissue repair.

In DOMS, without hydration, the tissue will not be able to get the oxygen and nutrients that are required for proper healing of muscle tissues that get torn by strenuous exercises.

It will delay cellular development.

Also, the cells that repair the tissue need to migrate through the extracellular fluid which is greatly composed of water.

Without hydration, blood flow will also decrease and thus cells, vitamins, nutrients and oxygen, which all travel through the blood, will not be able to reach the affected area early.

Thus, damaged and torn tissues will not be able to repair and develop. Hydration is also required to remove waste and dead cells.

In another trial conducted for 3 months, it was found that aloe sterol, which is derived from Aloe vera gel, increases skin moisture when taken orally.

Aloe vera gel, which has a cooling effect can also be applied to the affected area for temporary pain relief due to DOMS.

What does this mean? Aloe vera provides proper moisture and hydration required for tissue repair in DOMS. Aloe vera gel can be used to cool affected muscle and relieve pain temporarily.

4. It helps in tissue repair

The body has a self-repair mechanism for these muscles. It first removes debris caused by the dead and damaged cells with the help of macrophages.

Aloe vera also helps in the production of cytokines which target the immune cells and proteins involved in repair to the site of damage.

These cells help in the growth and regeneration of muscle fibres and tissues.

What does this mean? Aloe vera stimulates repairing of DOMS affected tissues by helping in production and activation of concerned cells and proteins.

Dosage of Aloe Vera for DOMS

Aloe vera is available in the form of gels, lotions, creams for the topical or external application. These can be applied to the affected area.

It usually contains the Aloe gel extracted from the fleshy part of Aloe vera leaves, without the skin.

For internal use, it can be consumed as juice or in the form of pills.

The juice of Aloe vera that is commercially available may contain the juice of the entire leaf and skin, containing gel and latex, both.

For oral intake, it is advisable to consult a doctor to determine proper dosage depending on your purpose and symptoms to avoid unwanted effects.

Precautions to be taken for Aloe vera use

When taking externally, or using topically for the first time, it is important to test for possible allergies that one might have for Aloe vera.

Allergic reactions may further worsen the condition. Apply on a small area of skin and check for unusual irritations or reactions.

When taking orally, it is important to consult with a doctor.

The Aloe latex in aloe vera juice contains anthraquinone which has laxative effects and causes diarrhea, abdominal and/or intestinal cramps and pain and electrolyte imbalance.

If you have an allergy to plants of Lilacae family, discontinue use.

Always check the purity and source of Aloe juice or gel before buying.

Aloe vera is the most promising alternative medicine which can be used for treatment and prevention of numerous ailments.

It has been used traditionally for medicinal purposes and recent researches prove its worthiness as a multipurpose agent for curing diseases and illness.

It can serve as a good alternative to the generally used Non-steroidal Anti-Inflammatory Drugs(NSAID’s) while being inexpensive and causing lesser side effects.

READ THIS NEXT -
What are Side Effects of Wheatgrass?
5 Ways Manuka Honey Heals Skin Rashes
4 Benefits Of Coconut Oil In Psoriasis [UPDATED]
How Cinnamon Oil Can Help in Toe Nail Fungus?