Diabetes is a highly prevalent chronic disorder that arises when blood glucose (blood sugar) levels are too high.

It can cause severe damage to an individual’s health- eyes, kidneys, and nerves.

It occurs in two forms:

In type 1, the pancreas does not produce the enzyme insulin which is responsible for digestion of glucose.

In type 2, which is the more common form, insulin is produced but not in sufficient amounts. Over time this may cause heart disease or even stroke. [1]

Cocoa has lately been emerging as a powerful superfood which can relieve symptoms of several diseases.

This use extends to diabetic conditions as well.

The compound is a known cardioprotective agent but is showing the ability to keep blood sugar in check as well.

Before we discuss its applications for diabetes, let us discuss a little more about the compound. [2]

The cocoa bean is obtained from the dried and fully fermented seed of Theobroma cacao. It has been used throughout history for various medicinal purposes.

In fact, the Incas used to refer to it as ‘the drink of the gods.’

However, it is more famous for its use in desserts and confectionery items in recent years.

This has misled a clear majority of people into believing that it is unhealthy.

In the following sections, we aim to bust that myth along with highlighting its benefits for people with diabetes. [3]

Cocoa has a unique healing system that helps it monitor any different types of cellular activities. Increasing scientific evidence is indicative of its ability to lower blood glucose.

Some of the benefits of using cocoa to aid diabetic conditions have been listed as follows: 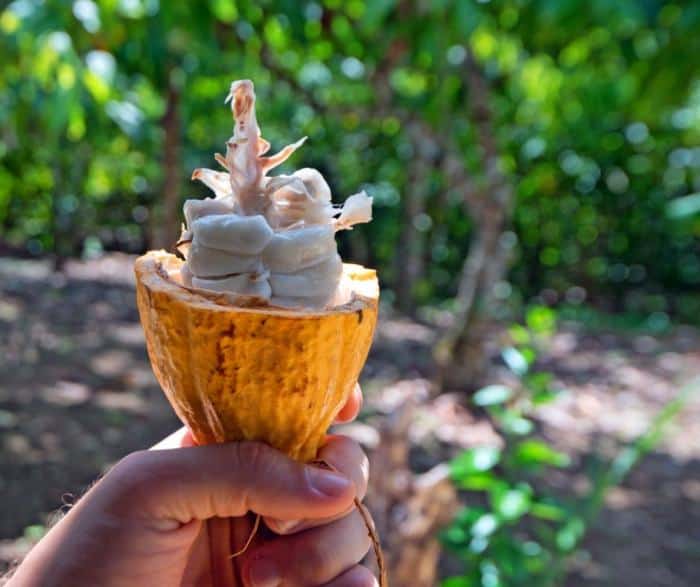 Lowering of blood pressure is essential to preventing the development of heart problems that can often arise due to diabetes.

In 2015, Ali Rostami et al. discovered that cocoa administration could satisfy all the criteria mentioned above.

They divided a group of 60 people who have type 2 diabetes into two groups- one to consume white chocolate (no cocoa) and the other which would consume dark chocolate.

Over eight weeks they saw that the second group’s blood pressure had lowered significantly.

Their study also revealed that polyphenols in cocoa could bring about such effects without causing weight gain, inflammation, or loss of glycemic control. [4]

What does this Mean? The flavanols in cocoa possess blood pressure lowering properties. It monitors blood flow enabling it a useful to treat hypertension in type 2 diabetes patients.

A hypoglycaemic agent is one that modulates glucose concentrations in the blood and reduces it in case it goes beyond desired levels.

Studies have indicated that cocoa plays an active role in regulating metabolic markers in the blood. This is primarily due to the flavanols present in it.

A 2005 study published in the Journal of Ethnopharmacology experiment helped validate this concept.

The study attempted to examine how cocoa extract could affect blood glucose levels in an animal model of the disease.

Over the period of the survey, it was discovered that cocoa not only lowered blood sugar but also lowered bad cholesterol (LDL and triglycerides) while upregulating good cholesterol (HDL).[5]

What does this Mean? Cocoa could be potentially used as a hypoglycemic and hypocholesterolemic agent, aiding conditions of both diabetes and high blood cholesterol.

In 2008, the Journal of Agricultural and Food Chemistry published a study which was based on the use of cocoa powder in an animal model of obesity and diabetes.

It was carried out using a keen focus on the effects of chemicals like polyphenols and methylxanthines obtained from cocoa on biological markers of diabetes.

The period of which the subjects were studied ranged over four weeks.

Through the use of the oral glucose tolerance test (OGTT) which measures the body’s ability to use glucose, they determined that cocoa could curb the negative changes caused by diabetes.

In particular, metabolism rates were enhanced due to an improved activity of the enzyme, superoxide dismutase. [6]

What does this Mean? Cocoa intake reduces the risk of type 2 diabetes and diabesity.

Research has suggested that the occurrence of inflammation is crucial to the development of type 2 diabetes.

This is because high blood sugar can induce inflammation and cause insulin resistance. Over time, this may damage blood vessels as well.

However, cocoa provides a suitable natural treatment for this.

Ranneh Y et al.’s investigative study showed that the polyphenols in cocoa could target a multitude of molecular pathways responsible for inflammation development.

What does this Mean? By lowering the levels of pro inflammatory markers, cocoa helps improve insulin sensitivity and in turn, reduces the chance of occurrence of type 2 diabetes.

If the rate of build-up of free radicles exceeds the rate of their elimination, a toxic condition known as oxidative stress develops in the body.

These primarily include metabolic disorders which impair blood vessel function.

Oxidative stress in people with diabetes may activate many biochemical pathways which can have negative impacts on heart health. [8]

Coupled with its anti-inflammatory effects, cocoa’s radicle scavenging capacity makes it useful for therapy of such cases.

Polyphenols in cocoa have been estimated to have a very high total antioxidant capacity (TAC) making them useful for driving away free radicles mediating diabetic complications.[9]

What does this Mean? Coca could be potentially used to eradicate harmful free radicles which are the cause of damage to blood vessels. It reduces oxidative stress by improving antioxidant enzyme activity.

6. Cocoa can act against gut Microbes which Aggravate Diabetes

A majority of diseases occur as a result of progressive damage caused by foreign substances entering the body.

Recent scientific evidence indicates that the extent of diabetes in an individual may have a direct correlation with gut microbiota.

According to the American Diabetes Association- “Animal models of obesity connect an altered microbiota composition to the development of obesity, insulin resistance, and diabetes in the host through several mechanisms.” [10]

These properties have been tested by various assays and have displayed positive results. [11]

What does this Mean? Cocoa restores healthy gut microflora and thus reduces the risk of developing diabetes.

7. Chocolate intake can Reduce the Risk of Diabetes

Greenberg JA attempted to test this phenomenon. He saw that moderate weekly chocolate consumption indeed reduced the frequency of diabetes.

What does this Mean? The polyphenols in cocoa possess anti-diabetic properties i.e. it can bring down the frequencies of diabetes. It monitors relative risk factors like stroke and heart attack as well.

An imbalance in glucose metabolism is the main sign of diabetes.

While cocoa compounds have been seen to elicit some benefits for diabetes treatment, like improved insulin sensitivity and enhanced enzymatic rates, Bowser SM’s recent study may be a game-changer concerning natural diabetes treatment.

Earlier this year, he published a study which highlighted how the compounds, procyanidins found in high molecular weight cocoa could bring about glycogen synthesis and increased glucose uptake in the absence of insulin.

This means that they behave like insulin and can act as a supplement for the same.

What does this Mean? In addition to increased insulin sensitivity and blood glucose stability, compounds in cocoa can behave like insulin as well. This can benefit in natural treatment for diabetes.

Dosage of Cocoa For Diabetes

The primary goal of the consumption of cocoa or dark chocolate is to optimize some flavonols taken in by the body. Further research is required to determine the optimal dose.

However, at present, 25-40g of dark chocolate containing 85% cocoa is recommended. Milk and white chocolate do not provide sufficient health benefits. [13]

Cocoa is safe for consumption, but a few precautions must be noted. Ensure that you consume dark chocolate or pure cocoa that is free from added sugar and milk.

Therefore, such individuals should start using with minimal amounts.

It is best to exercise moderation in consumption

It can disrupt drug metabolism and reduce drug effectiveness.

This means that cocoa should be taken a couple of hours after a drug has been consumed.

Tyramine, a chemical in cocoa has been observed to cause a headache in some individuals.

The presence of oxalates in cocoa can increase the urine excretion of oxalates and thus, promote kidney stone formation, a highly risky condition.

Cocoa consumption can lead to interference with the blood clotting process and blood sugar levels during surgery. Therefore, it should be avoided at least two weeks beforehand.

The caffeine content of cocoa can worsen the symptoms of IBD (inflammatory bowel disease) such as diarrhea, in large amounts.

The caffeine content of cocoa can cause irregular heartbeat and high blood pressure. Therefore, people with heart disease should consume cocoa in limited amounts.

Blood sugar may also be raised by cocoa, and therefore, diabetes patients should avoid chocolate.

The high caffeine content of cocoa can increase the risk of miscarriage, premature delivery or low birth weight in pregnant women. In breastfeeding women, caffeine may cause gastric disorders in the infant.

Though dietary amounts of cocoa should not pose any risk, please consult a health practitioner before taking cocoa at therapeutic levels during pregnancy and lactation.

Through the above studies, we can see that cocoa offers a variety of benefits for diabetes.

As a result, scientists are now trying to use cocoa to develop formulations to aid this condition.

Therefore, it is advisable for patients who have diabetes to give pure dietary cocoa a try.