If you are not able to carry yourself well in short clothes due to lack of confidence and due to the presence of unpleasant appearance of the unwanted fat deposits under your skin, apply some amount of coconut oil to it.

Overview of the Cellulite

Cellulite is the condition in which, there is excessive accumulation of fats beneath the skin and these accumulated fats tend to push the connected tissue above them giving the skin a bumpy and dimpled appearance externally.  Normally, the skin is connected to the fat present below it with the collagen fibres. In case of cellulite, these collagen fibres break down as a result of excessive stretching.  According to medicine, it is a harmless condition but people find it displeasing due to cosmetic reasons.  It is often misunderstood that the incidence of cellulite is more common among obese people than in lean ones; though weight loss may help in improving the quality of the skin. Cellulite is caused by various reasons including poor lifestyle of the modern age, heredity and hormonal changes. It is most commonly seen in areas like thighs; buttocks etc. and more in noticeable in people with fairer complexion.
There are three grades of cellulite:

How and why Coconut oil helps in Cellulite?

Coconut oil consists of Medium Chain Fatty Acids (MCFA).  Unlike other fatty acids, these have a unique metabolism which does not involve bile metabolism.  MCFAs undergo direct metabolism in the liver to get converted into a simpler by-product called ketone.  These fatty acids are readily absorbed by the body and don’t get accumulated like other fats.  They circulate in the blood and serve as an alternative source of energy.  Not only does the coconut oil prevent further accumulation of fats but it also tends to burn the stored fat deposits.  So, MCFAs have the ability to break down the cellulite in body.

Another study involving 49 overweight patients of the age 20-50 years was conducted by Columbia University and New York Obesity center, St. Luke’s Hospital, New York, USA, to evaluate the effect of MCT oil against fat loss.  It was a comparative study between MCT oil and olive oil. The duration of the study was about 16 weeks.  The patients received 18-24 gm. /d of either of the oils.  It was a randomized trial.  31 patients completed the study and it was noted that there was significant reduction in the fat mass with the consumption of MCT oil than noted in case of olive oil. 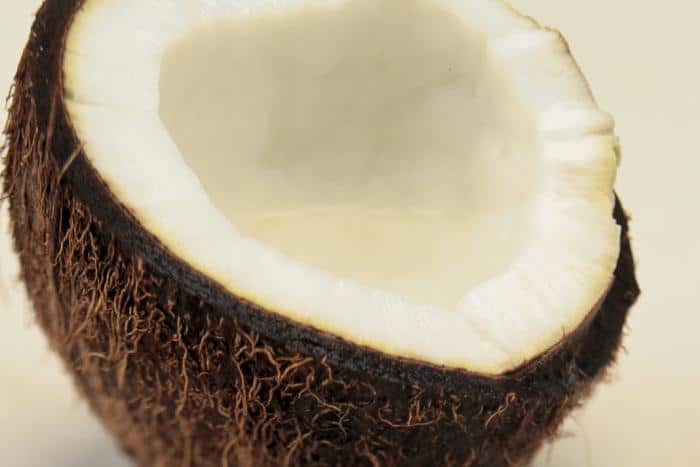 Apart from oral consumption of coconut oil, even massaging the oil on the affected areas may help.  It gets easily absorbed by the skin and helps in reducing its roughness giving it a soft appearance.  Coconut oil is a great exfoliate for the skin as it brushes of the dead skin cells as well as increases the blood and lymph flow, thus promoting new growth of skin. Dry brushing the skin further helps in improving the blood circulation.  All these effects contribute to the reduction of cellulite.  In cellulite the dimple skin contains toxins. These toxins are normally produced in order to prevent organ damage.  Increase in the toxin level further increases fat accumulation. Due to improved circulation by the coconut oil, these toxins are flushed out and broken down causing a reduction in cellulite.

READ THIS NEXT -
Making Coconut Oil Pack at Home
Quinoa for Bodybuilding
5 Ways Aloe Vera Can Benefit in Gastritis [Science Backed]
Which Spices Go Well With Cinnamon?
6 Disorders Argan Oil Benefits As An Antioxidant
Wheatgrass Powder or Juice - Which one is Better?