Millions of people across the globe have Gout, which in simplest terms is a type of arthritis.

It is characterized by a sudden attack of pain along with redness and inflammation of the joints.

These attacks occur repeatedly unless it is effectively treated. The main causative agent of gout is accumulation of uric acid in the blood stream.

Uric acid, in the form of needle-like urate crystals gets concentrated at the various joints and result in the symptoms.

Uric acid is generally produced as a breakdown product of purines- the building blocks of DNA in the nucleus of all cells of the body.

Purines are also present in a high proportion in foods such as alcohols and steak. ,

Although gout is a painful condition, it is a treatable one.

However, it is necessary to treat gout thoroughly and ensure that there are no further attacks to prevent any long term kidney and joint damage.

Thus, we can make use of alternative medication options like cinnamon to treat this condition.

Cinnamon refers to all members of the genus Cinnamomum, the most popular species being Ceylon Cinnamon and Chinese Cinnamon.

It has mainly been used as a spice and a flavoring agent but now it is gaining importance because of its nutritional and health benefits.

Since the diet composition plays an important role in the development of gout, it is necessary to ensure that you consume the correct foods in the right proportion to prevent the occurrence of this inflammatory
condition.

One such important inclusion in the diet could possibly be a low dose of cinnamon.

A few research studies dating back to 2000 have proved that it is possible to develop cinnamon to treat gout. These studies have been listed below:

1. Cinnamon can inhibit a catalyst involved in Uric acid formation

In 2000, a group of scientists proved that from among 122 traditional Chinese medicinal plants, cinnamon is the most effective in treating hyperuricemia-related disorders.

A particular enzyme known as xanthine oxidase catalyzes a reaction which converts hypoxanthine into xanthine.

Xanthine is then further converted into uric acid. It is the accumulation of this uric acid which results in gout.

Thus, this research group analyzed the efficacy of various plant extracts in inhibiting this particular enzyme.

The most effective agent was the methanolic extract of Cinnamomum cassia. It was inhibitory at a concentration of 18μg/ml.

What it means: Thus, they showed that by inhibiting xanthine oxidase using a very low concentration of cinnamon extracts, we can possibly prevent the occurrence of gout. 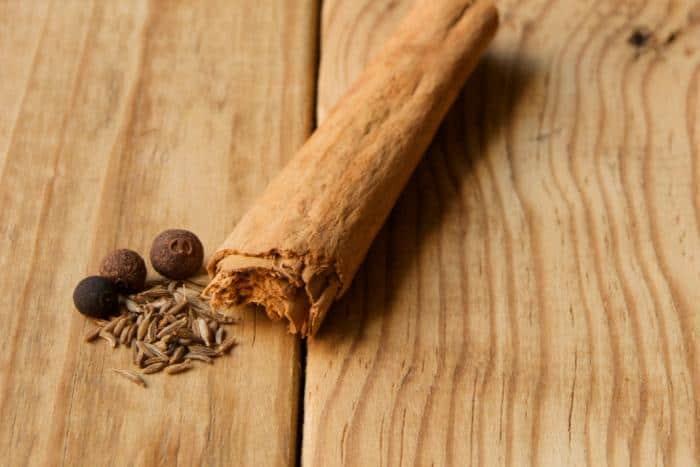 Another study in 2006 used another compound of cinnamon, namely, cassia oil and tested its efficacy against two enzymes-xanthine dehydrogenase and xanthine oxidase.

Both these enzymes are an important part of the metabolic pathway which results in the production of uric acid.

They tested the effect of the oil in hyperuricemic mice. They found that upon oral administration of the oil, there was a significant reduction of the urate levels in the liver as well as in the blood serum.

It was also found that this cassia oil dosage inhibited the activity of both the enzymes.

The response was significant in a dose and time-dependent manner.

The most significant result from this study was that a dose of 600mg/kg of cassia oil was as effective as the drug allopurinol, which is often given to reduce urate levels in the liver.

What it means: Cassia oil from Cinnamomum cassia was as potent as the chemical drug prescribed in the traditional treatment of gout.

Thus, treatment options often involve the use of anti-inflammatory drugs and agents.

Cinnamon extracts are known to be a potent anti-inflammatory agent.

A South Korean research group in 2006 explored the possibility of using Cinnamon water extracts as immune-modulatory agents in the case of inflammatory disorders.

Although this study did not particularly target gout, the results showed that cinnamon extracts are able to contain the inflammatory condition in a particular set of cells known as activated T cells, which are a very important fraction of the immune cells.

These cells often produce chemicals known as cytokines which contribute to the inflammatory environment.

What it means: This study helped in establishing that cinnamon extracts can assist in reducing inflammation.

A research group has analyzed the effects of dietary sugars like glucose and fructose on the levels of uric acid.

They hypothesized that the injection of fructose results in a decrease in the levels of ATP, the energy molecule, in the liver followed by the degradation of purines which finally elevates the uric acid levels.

They also found that there is an elevation of serum uric acid levels upon oral administration of fructose.

Thus, a diet rich in fructose can elevate uric acid levels and thus, may result in the development of gout.

What it means: As cinnamon is known to reduce blood sugar levels, cinnamon can help to reduce fructose levels and inhibit the fructose-induced hyperuricemia.

There are varied benefits of cinnamon

Cinnamon is rich in numerous nutrients including manganese, iron, calcium, and dietary fibers.

Each of these nutrients can contribute to reducing the possibility of the occurrence of gout as shown by the indirect evidence.

The USDA chart has listed out all the nutrients which are present in cinnamon and their proportions.

Thus, on the basis of these nutrients, we can make conjectures regarding the benefits of cinnamon in treating gout.

As of today, the FDA has not approved the use of cinnamon against any disease or disorder.

Thus, cinnamon alone will not help to treat the disorder but it can possibly be used as a type of alternative and complementary medication, under the supervision of a doctor.

Benefits of high fiber – The University of Maryland Medical Center suggests that having a high-fiber diet helps to reduce gout.

This is because the fibers help absorb the excess uric acid and thus, reduce inflammation. As cinnamon too is rich in fibrous content, adding a small proportion of cinnamon in our diet might help to reduce the inflammation.

Benefits of low sugar – Cinnamon also does not contain any sugars inherently and this might ensure that the consumption of cinnamon does not contribute to the blood sugar levels and result in sugar-induced hyperuricemia.

In addition to not containing sugars, it itself lowers blood sugar levels as mentioned earlier. Thus, this is a very beneficial property of cinnamon.

Cinnamon is one of the most powerful anti-oxidant spices and is more effective than most chemical food preservatives.

Although uric acid itself is a powerful anti-oxidant, it behaves as a pro-oxidative molecule in cells and contributes to the oxidative damage to cells.

Benefits of high magnesium – It has been reported that in patients suffering from gout, there is often the development of erosive joint diseases.

This is due to the persistent hyperuricemeia seen in gout. Magnesium plays a very important role in the growth and development of bones.

It is seen that in individuals with low magnesium intake there is retarded bone development.

Although there is no fixed dose, it is recommended that cinnamon consumption should not exceed 4-6 g per day and one should not take it for a very long duration on a continuous basis.

Also, it is best to use Ceylon cinnamon and not cassia cinnamon.

Although cinnamon is rich in various nutrients, it also contains a high dose of coumarin, which is associated with the development of kidney and liver disorders.

Thus, it is necessary to limit the daily cinnamon intake to 4-6 g and for short duration of time.

Excessive consumption might exacerbate a pre-existing liver condition. It is also advised that pregnant and lactating mothers limit their cinnamon intake to avoid any deleterious effects on the fetus.

The cinnamon tree extract is rich in varied nutrients and their combined effect helps to reduce the various symptoms of gout.

The beneficial properties of cinnamon include low sugar content, high fiber content, high levels of iron and manganese as well as anti-oxidant activity.

Thus, it is possible to use cinnamon as an agent to treat and/or prevent gout, but more research is needed to establish a stronger connection.

However, cinnamon should be consumed with a doctor’s prescription because it may lead to kidney and liver disorders due to its high coumarin content.

READ THIS NEXT -
4 Benefits of Coconut Oil in Menopause
Can Quinoa Promote We​ight Loss?
Aloe Vera for Digestion
FlaxSeeds Vs. Chia Seeds: Which One Should You Choose?
Coconut Mayonnaise
Aloe Vera Gel Reduces Acne in 8 Weeks : Research Study