A sore throat can be caused by a number of conditions, but the most common by far is a bacterial or viral infection.

Bacterial infections may be caused by streptococcus, hemophilius, or mycoplasma. Symptoms of sore throat include throat pain, and acute pharyngitis.

Manuka honey is a special kind of honey that has a lot of additional health benefits apart from that of regular honey. Manuka honey is made by bees that feed on the nectar of wild Manuka trees found exclusively in New Zealand.

An important compound that is found in manuka honey that lends it a number of its beneficial properties is Methylglyoxal. This compound is responsible for what is commonly called “non peroxide activity” that is observed in manuka honey.

This is essentially anti-microbial effects exhibited by manuka honey due to the presence of methylglyoxal, and the effect is above and beyond what is observed in regular honey. It is because of this compound that manuka honey also has an anti-viral effect.

Although the effect and potency of manuka honey against various viral infections has not been as widely researched as it has been for bacterial infections, there is nevertheless considerable evidence to suggest that manuka honey could be used as a legitimate home remedy for diseases caused by viral infections.

Manuka honey has potent anti-microbial and anti-inflammatory properties that help in treating a strep infection or other causative factors of sore throat.

One of the primary causes of sore throat is believed to be due to a bacterial infection. Manuka honey, due to the presence of methylglyoxal, functions as a very effective broad spectrum anti-bacterial.

When the sore throat is caused by a bacteria called Streptococcus pyogenes, the symptoms and the conditions are a bit more serious and may worsen dramatically when not treated properly and on time. This condition is also called Strep Throat.

Manuka honey is known to be effective in the inhibition of this particular bacteria. In a study that was published in March 2012, the effect of manuka honey on biofilms of Streptococcus pyogenes was seen .

During the course of the study, the biofilms of the bacteria were incubated with manuka honey and it was observed that manuka honey managed to reduce the amount of bacteria significantly.

The addition of manuka honey to the films caused a great amount of cell death and caused the cells to dissociate from other cells and the biofilm (after dissociation the cells are unable to grow and divide due to the absence of a support).

This study proves that manuka honey has immense potential in the treatment of infections caused by the Streptococcus pyogenes bacteria.

What it means?
Due to the presence of methylglyoxal, manuka honey has an antibacterial effect that helps in the treatment of sore throat caused by bacterial infections. In addition, manuka honey, due to the same effect, is also effective in treating strep throat. 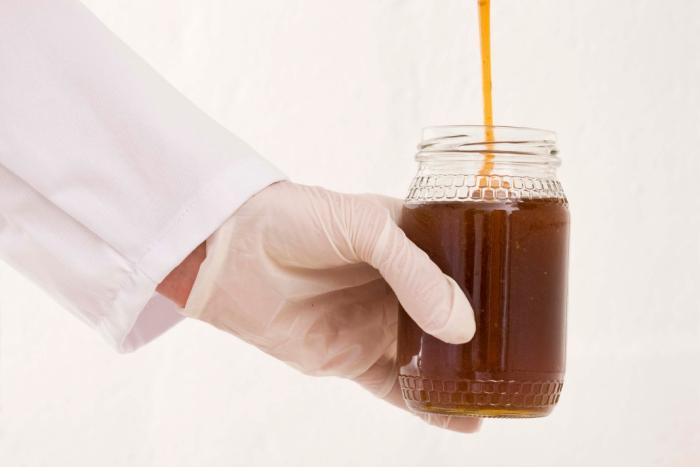 Manuka honey is known to have anti-inflammatory action, and thus can be used to treat sore throat and its adverse symptoms.

In addition to all this, manuka honey is also known to provide a boost to the immune system during an infection. A study conducted on January 2012 observed that this effect of manuka honey is because of the presence of Arabinogalactan proteins and Apisimin in manuka honey .

What it means?
Manuka honey has a potent anti-inflammatory effect that aids in the treatment of sore throat and management of most of the symptoms as the throat pain generally arises due to inflammation in the throat.

How to take manuka honey for sore throat or Strep Infection?

Methylglyoxal is present in varying amounts in different kinds of manuka honey. The more the amount present, the more effective the honey will be. UMF (Unique Manuka Factor) rating is a universal system followed world-wide that gives the quality of store bought manuka honey.

Maximum benefits can be guaranteed only for store bought manuka honey that has a rating of 10 or above.
For oral consumption of manuka honey, there is no specific dosage as it is a natural food.

A study conducted on people in the age group of 42-64 concluded that honey was safe for regular and frequent consumption and had no observable adverse effects on the normal health of the body .

1 teaspoon manuka honey daily 3 times a day in between meals is recommended for the maximum effect . While manuka honey can also be consumed by dissolving it in cold or lukewarm water, the most effective way to take it is straight from the spoon. High temperatures degrades its beneficial properties manuka honey.

Always check the UMF rating on store bought honey for quality and purity.

Some people may be allergic to manuka honey, especially if there exists already an allergy to bees or pollen. If you’re using manuka honey for the first time, it is recommended that you get a patch test 48 hours beforehand to ensure that there are no adverse allergic reactions.

Consumption of manuka honey is not safe for children under 1 year, as it may cause botulism poisoning .

Diabetic patients may consume manuka honey, but with extreme caution and while keeping a regular check on their blood sugar levels.

Manuka honey is an effective home remedy for treating sore throat. Its anti-bacterial activity can help in inhibiting bacteria that cause throat infections. Additionally its anti-inflammatory effect can help in reducing throat pain and swelling.

READ THIS NEXT -
Quinoa for Digestive Disorders
5 Benefits of Manuka Honey In Chicken Pox
3 Science Backed Benefits of Coconut Oil in Dermatitis
Benefits of Cocoa for Chronic Fatigue Syndrome
Can Quinoa Promote We​ight Loss?
Bee Pollen and Prostate Health : Can it Help?