If you are not living in tropics, its very likely that you would not have supplies of immature coconuts (green coconuts which you generally see in pictures with straws in them). What you will have in your superstores is mature coconuts (brown colour with hard shells). This is not a bad news though because almost all coconut products - coconut oil, coconut milk, coconut cream, etc. are prepared using this mature coconut. This is the one which is used in cooking chutneys, gravies etc.

While mature coconut is great, the biggest problem in using it is to open it. The shell of a mature coconut is very hard and tough to break. I personally believe that coconut is the hardest of all fruits to eat because it is so tough to open it! I have been breaking-opening coconuts for years now and here I share some tricks you can use to break open a coconut easily.

Ways to break open a coconut

Before you break open, it is better to drain the water of the coconut. You can do this by puncturing one of three eyes (these are three spots on the top of every coconut, two eyes are hard while one is soft, pierce the soft one) of the coconut. Coconut water is very tasty and refreshing, so never waste it! Now the real work starts. 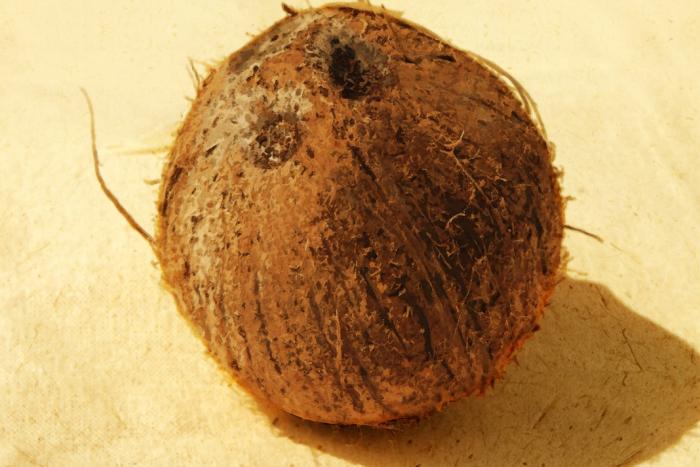 Method one : Using a hard surface

This is what I do in most cases, I hold the coconut tight and hit it against a hard surface (marble floor, or other stone floors). In doing this 3-4 times the shell breaks in two. If you are doing this first time, there can be several dangers (telling from my experience when I started this!). The most serious is your finger coming between coconut shell and floor when you are hitting it - this will literally break your finger. Second is you will feel sudden jerk in hand when coconut will hit the ground, the trick to avoid this is just loosen the grip as soon as coconut hits the ground (this may require some ptactise though).

This is the most raw and popular method of breaking a coconut shell.

Method two : Using a hammer to open a coconut

The effect of hitting the floor can also be created by using a hammer to hit the coconut. For this you need to make sure the coconut is held tight somehow so that it does not get displaced as you hit it by the hammer. This can lead to injuries to hand. The coconut itself may move / jump suddenly and break things at your house (I have broken a window glass when I used a stone to break open a coconut, I missed the target slightly, it just flew and hit the window!)

Another method is to use an oven. For this put the coconut in baking sheet and then into the oven for 15-20 min at ~200 C. This will crack the shell. Then you can either hit it slightly on ground or use a hammer to break it open.

So you have passed stage 1, stage 2 is to remove the meat from the shell. Coconut meet is loosely attached to the shell and to get it you again can use any of these methods.

Method one : Keep Taping and use knife

This is what I personally use. I tap a large coconut piece over a hard surface 15-20 times. This loosens up the meat from shell and then I use a knife to easily take it out! You get coconut meat with shape as that of the shell from this method! It looks amazing!

Method 2 : Break in small parts and then use knife

In this method, use hammer to further break the coconut piece and then use knife to separate the shell with meat.

Precautions while opening a coconut

Injuries and sometimes serious injuries can happen while opening a coconut, so be careful. A few points:

A fresh coconut meat is absolutely white. If it has yellowish portion then it means there is some mould. This is not uncommon. If it is small yellow patch just remove the portion and wash and use the rest. In case there is too much of coloration discard the whole coconut and try a new one!

Hope the above tips will help you to break open a coconut more easily next time. Do let me know how you did and share any new techniques if any!