‘An apple a day keeps the doctor away’ is something that we have heard time and again but can it keep the weighing scales away!?

Interestingly research states that apple should be included in the weight loss diets.

Apples have 0% cholesterol and total fat.

It is rich in Vitamin C and B complex vitamins. It is rich in compounds known as polyphenols which are strong antioxidants.

Apple is a good source of dietary fiber (2-3 grams in 3 ounce serving).

Dietary fiber in apple favorably alters the microflora present in the intestine and protects the colon from cancer.

How does apple consumption help in losing weight?

Following points indicate the manways by which apple fights obesity.

A fiber-rich diet prevents obesity in a number of ways:

A comparative study was conducted between oats and fruits as sources of fibre and their effect on body weight. Apple was one of the fruits that were added to the diet.

Reduced calorie intake and body weight was observed in the fruit group compared to the other group.

It was concluded that the energy density of the fruit, in this case apple, helps in losing weight gradually.

Similarly, another study proved that fruit intake (apple) is superior to oats in causing weight loss, improvement in blood sugar and insulin levels and reduction of cholesterol. The reason to include oats for comparison is that oats are a good source of fibre.

The inclusion of apple pectin (soluble dietary fibre) in the diet is found to reduce weight gain, food intake, and body fat by stimulating satiety hormones.

What does this mean? Presence of fibre and adequate calorie density of apple reduces appetite and subsequent energy intake.

Apple polyphenols or bioactive compounds of apple, as well as its fibre, remain undigested.

These compounds have a beneficial effect on the microbes found in the intestine. Gut microbes influence harvest and storage of energy.

Gut microbes in obese individuals are different from those present in lean individuals.

Apple improves the gut microflora which aids in healthier digestion and reduces the risk of cardiovascular and metabolic diseases.

Apple is a natural inhibitor of pancreatic lipase. It prevents the enzyme lipase from digesting fats stimulating fat excretion.

What does this mean? Compounds present in apple improve colon health by improving gut microflora and influencing digestive enzymes. This facilitates improved digestion and excretion of fats. 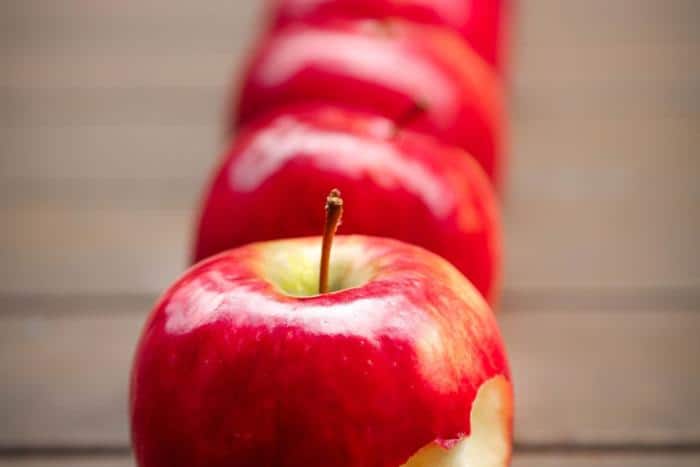 Apple polyphenols are strong antioxidants. They regulate lipid metabolism and reduce levels of lipids and cholesterol in the blood.

The antioxidant property is not limited to the flesh alone; apple peels are also rich in antioxidants.

Research proves that dietary apple polyphenols can facilitate removal of cholesterol oxidation products found in processed or fast foods from the body.

Cholesterol oxidation products are harmful products obtained from cholesterol when foods are cooked at high temperatures.

It also facilitates excretion of fats and cholesterol from the body.

A clinical trial conducted in Denmark that whole apple and apple pomace consumption can lower blood lipids and cholesterol better than apple juice.

Apple polyphenols exert an anti-obesity effect by regulating the activity of genes that are involved in fat metabolism and deposition.

Adiponectin is a protein that regulates glucose and promotes the breakdown of fats. High levels of adiponectin are associated with low body fat percentage.

What does this mean? Apple polyphenols regulate fat metabolism which helps in preventing cholesterol levels in the blood and reduces body weight.

Control of blood sugar levels is associated with a lower tendency to gain weight, reduced appetite, and enhanced satiety.

Triterpenes (organic compounds) obtained from pomace and peels of apple inhibit the activity of alpha-glucosdase enzyme.

This enzyme initiates digestion of carbohydrates and inhibition of this enzyme serves to be therapeutic in diabetes.

Apple extract prevents glucose absorption in intestines which could be beneficial in controlling post-meal spikes in glucose.

Instead, it can improve glucose tolerance.

What does this mean? Interfering in carbohydrate metabolism and preventing digestion of carbohydrates is another mechanism by which apple acts to prevent increase in body weight.

Results of an animal study indicate that supplementation of apple pomace or apple juice concentrate can prevent weight gain and reduce levels of cholesterol and blood lipids caused by diet-induced obesity.

What does this mean?  Not only whole fruit but even consumption of apple juice can help in losing weight and body fat.

How much apple to consume for weight loss?

A research study was organized wherein individuals were asked to consume either apple or apple sauce or apple juice with or without fiber before meals.

Researchers concluded that whole fruit intake before meals is the better than consuming other forms for controlling appetite.

So it is good to consume a whole apple before major meals. Apple juice (clear or cloudy) would also suffice as one serving in case you get bored eating the fruit.

You can also include apple in your breakfast cereals, pies and fruit salads.

Apple has many other health benefits which should motivate you to eat this fruit regularly.