The body is designed to eat adequate amounts at regular intervals and should stop eating when energy requirements are met.

However, there is a marked difference between disordered eating and eating disorders. Upto 50% of the population fail to have sound relations with food, body, and exercise.

But that does not mean that each one of us is suffering from an eating disorder. The difference lies in severity.

An individual with disordered eating is often engaged in some of the same behaviours as those with eating disorders but at a lesser frequency or lower level of severity.

Yet they are at risk of developing a full-blown eating disorder or psychological problems.

Among the three common eating disorders (anorexia nervosa, bulimia, and binge eating disorder), we are going to focus on Binge Eating Disorder (BED).

As per ‘The Diagnostic and Statistical Manual of Mental Disorders, Fourth Edition, Text Revision (DSM-IV-TR)’, BED was included as a provisional diagnosis under the category Eating Disorder Not Otherwise Specified.

But based on latest research, DSM-V has classified BED as a formal eating disorder.

BED is defined as consumption of excess food within a 2 hour time period with the loss of control on intake and eating more than what a normal individual would eat within the same time span.

This disorder is differentiated from bulimia nervosa by lack of compensatory behavior for overeating like purging, exercising etc.

What is a Binge?

Earlier in the nineteenth century, the word ‘binge’ meant ‘a heavy drinking bout’.

However today it means to eat in excess.

For many people, a binge is not a serious matter- it might just mean an occasional indulgence but for some, it is a loss of control and whirlpool of emotions.

Some individuals may have an occasional episode of overeating which may not have serious emotional consequences. This does not classify as binge eating disorder.

However, for others there is a similar tune playing in their mind:

‘It starts with a memory of someone upsetting me. I am seized with an uncontrollable urge to eat. My mind has a war raging against this.

I give in and trash in everything I can possibly eat, gulping in rapidly to avoid thinking about what I am doing. I am restless and I can’t stop.

But I do stop when I physically can’t eat anymore. And then begins the cycle of guilt and disgust.’

Binge is typically characterized by an abnormal spike in consuming food and helplessness regarding intention or ability to control this spike.

Typically a binge constitutes 1,000 or 2,000 calories, however, binges more than 6,000 calories have been reported.

The frequency of binges that constitute binge eating disorder is twice a week for a period of three to six months according to DSM-IV.

There no single cause that individually contributes to BED, but a number of multiple factors at play.

Physical causes include improper functioning of the hypothalamus, a person’s vulnerability to developing such disorders due to lack of secretion brain chemicals.

Even genetic factors or family history of eating disorders predispose a person to develop BED.

Childhood maltreatment, sexual abuse, stress, and depression are few of the psychological factors that contribute to BED.

Dieting is another factor since it involves deprivation or restriction of certain food types which tend to crave.

Are there any criteria that can help in the diagnosis of BED?

The DSM-V, published in 2013, lists the diagnostic criteria for binge eating disorder:

B.) The binge eating episodes are associated with three (or more) of the following:

D) The binge eating occurs, on average, at least once a week for 3 months.

E.) The binge eating is not associated with the recurrent use of inappropriate compensatory behaviors (e.g., purging) as in bulimia nervosa and does not occur exclusively during the course of bulimia nervosa or anorexia nervosa.

What are the characteristics of individuals suffering from BED?

Although the above-mentioned criteria are self-sufficient in aiding in the diagnosis of BED but here are a few characteristics that can help you ascertain the severity of the disorder and whether your loved one is in need of help. 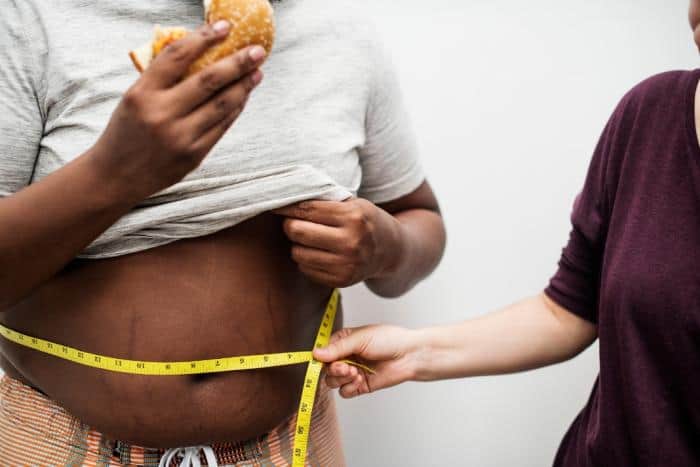 What goes on in the brain when you are seized with a binge episode?

Binge eating stimulates the same reward pathway that is activated in food addiction or substance abuse. (Read more: Is overeating an addiction?)

This pathway is known as the mesolimbic system of the brain.

Food is necessary for our survival and whatever actions we take that supports our survival is rewarded by this system, in other words, it stimulates a pleasurable feeling.

Also, this feeling is captured as memory and reinforced in our mind so that we repeat these actions.

However, in an eating disorder, this system is impaired to the extent that the part of the brain that is involved in controlling our food intake starts functioning abnormally and that is why individuals suffering from BED experience loss of control on food consumption.

The pleasurable feeling, as well as the repetition of behaviour, is caused by the action of the following brain chemicals:

Opioids are addictive substances that are secreted by a brain in order to relieve pain and calm us down.

This is the feel good chemical released by the brain.

It plays a very significant role in food’s hedonic properties. In rats binge like intake of sugar increases levels of dopamine in the brain’s pleasure center.

However repeated bingeing can also dull dopamine response and therefore motivate an individual to eat further to achieve the pleasurable state.

We are aware of the withdrawal symptoms drug abusers face.

Such aversive state has been described in individuals suffering from BED when in recovery, thus demonstrating the role of brain chemicals in the manifestation of the eating disorder.

BED as a gateway to other afflictions

Binge eating disorder is a distortion in the normal eating behaviour. Since it affects the brain the individual is likely to be affected by other psychological disorders.

Also, its a consumption of excess calorie of foods and there is no control over the nutritional quality of food, one is at a risk of developing other health problems.

Not all persons with BED are obese, but individuals suffering from BED are likely to suffer from obesity. Weight increases with the growing severity of the disorder.

Prevalence reports of BED present that around 8.9 to 18.8% of the individuals seeking a treatment for obesity suffer from BED.

It was observed that those who opted for bariatric surgery and were diagnosed with BED were likely to suffer from depression and anxiety.

Those that suffer from BED also have a poor life quality.

Apart from the preliminary hazards linked with BED as mentioned above, the following conditions may also occur:

What are the treatments available for BED?

An effective BED treatment would focus on releasing the stress and negative emotions linked with this behaviour. Pharmacotherapy involves administration of antidepressants and appetite suppressants.

Psychotherapy for BED including the following:

Binge eating afflicts approximately 5% of U.S. adults at some time in their life. Specific factors that can cause binge eating disorder have not been identified.

Binge eating is a complex behavioral phenomenon that closely mirrors substance abuse and addiction in its symptoms and mechanism.

Treatment of binge eating disorder should focus on reducing the stress behind such behavior as well as changing eating patterns.