Arthritis is one of the inflammatory conditions that affect the joints of the body making one less likely to perform day-to-day activities.

Main symptoms of arthritis such as joint pain, stiffness, and swelling make the patient’s life stressful and sometimes unbearable.

Arthritis is managed mainly by pain-killers, topical ointments, exercise, and food control. Apart from the main symptoms patient can also suffer from anxiety and stress which in some cases does need special attention.

Managing arthritis definitely not an easy task but, certain lifestyle changes can help in the prevention of further disease progression and improve patient’s quality of life.

Natural supplements are soaring in the market with claims of being effective in numerous diseases.

Spirulina is one such supplement that has gained some limelight in this matter.

Before we explore the benefits of spirulina in arthritis let us learn a little bit more about this natural supplement.

Spirulina is a blue-green, single-celled alga that grows worldwide in the oceans. It is also cultivated in natural or artificial lakes.

Spirulina is a spiral-shaped microbe that is edible. Spirulina is unique in a sense, as it has a wide variety of nutrients that make it a good source of energy.

Spirulina is a nutrient rich containing vitamins, protein, iron, minerals, and antioxidants. Beta-carotene, a natural anti-oxidant is found in abundance in this natural supplement.

Spirulina has been utilized as a dietary supplement for the past 20 years to strengthen the immune system, reduce cholesterol, obesity and as a source of proteins and vitamins.

It is interesting to know that spirulina has been used in the space by NASA scientists as an excellent nutrient source to the body.

A mere 1kg of spirulina is said to contain a nutritional value of 1000kg fruits and vegetables.

Scientists have now conveyed that spirulina has medicinal properties that benefit diabetes, hypertension, and cholesterol.

It is also found to be an effective antioxidant and anti-inflammatory agent.

Benefits of Spirulina in Arthritis

The benefits of spirulina in arthritis are due to its nutrient and antioxidant-rich chemical composition.

It can provide antioxidant, anti-inflammatory, anti-obesity and anti-fatigue properties to arthritis patients.

Researchers have confirmed these properties with animal studies and few human trials. Nevertheless, more studies in the larger human population could be valuable in this topic. 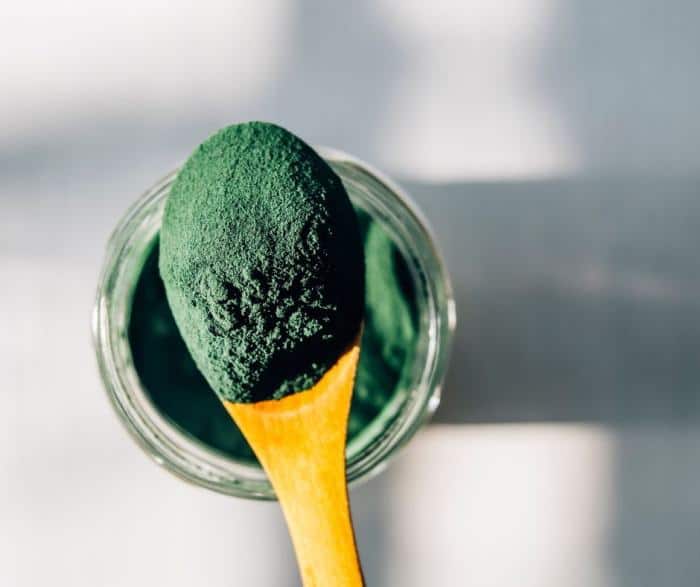 Spirulina contains beta-carotene and vitamin E, which are super antioxidants. Along with these, the presence of a compound called C-phycocyanin is responsible for its antioxidant effect.

Spirulina has demonstrated its capacity in reducing the oxidative stress within the body improving the enzyme activity in the body and engulfing the free radicals.

A clinical trial conducted in 78 individuals proved the antioxidant capacity of spirulina by improving the removal of toxins in the body.

Another trial in 16 volunteers proved the antioxidant effect of spirulina within 3 weeks of 5% spirulina intake.

Antioxidant properties of spirulina have been portrayed through various animal studies. However, studies in a large human population are still lacking.

Spirulina can be of good use in replenishing the antioxidants in the body of arthritis sufferers.

What does this mean? Spirulina no doubt contains potent antioxidants which could be beneficial in reducing oxidative stress among arthritis patients. Lack of human trials limits the use of this supplement.

2. Spirulina Can Reduce Inflammation in The Body

Inflammation reduction in arthritis is a common goal in arthritis management. Medications, as well as dietary interventions, help in attaining this goal.

These chemicals act by reducing the enzymes that ultimately lead to the activation of the inflammatory pathway in the body.

Two human clinical trials have proven the anti-inflammatory effect of spirulina by reducing the chemicals that cause inflammation. Animal studies also support these claims.

Studies involving spirulina are limited in the human population to come to any strong conclusion. Therefore, it must be said that spirulina seems to a promising anti-inflammatory agent unless proven otherwise in larger human trials.

What does this mean? Spirulina possesses anti-inflammatory effects which can benefit arthritis patients. However, stronger conclusions are only possible with further evidence in from larger human trials.

3. Spirulina Can Help in Weight Loss Which Eases Arthritis Symptoms

Obese individuals are more likely to develop arthritis. Obesity in arthritis is a major hurdle in obtaining a better quality of life. Weight loss can help in reducing symptoms of arthritis.

Spirulina, despite containing a good amount of nutrients, is known to be cultivated and used in reducing weight and managing obesity.

Spirulina was studied on 64 obese patients to reveal that it reduces body weight and it is a potent appetite reducing agent.

Another trial conducted by Szulinska M et.al. in 50 obese patients also reported a significant decrease in the body weight. Preclinical studies (animal trials) have also proven the weight reducing the effect of spirulina.

Weight reduction brought by spirulina can help in the management of arthritis by reducing the pressure on the joints due to excess weight.

What does this mean? Spirulina is a proven supplement that significantly reduces weight by reducing appetite. Weight reduction can help arthritis patients manage their disease better with lesser symptoms.

4. Spirulina Can Fight Fatigue Which Can Benefit Arthritis

Spirulina is a nutritional supplement that has an excellent energy producing capacity within the body which can benefit in combating the excess muscle fatigue in arthritis patients.

A trial with 9 individuals showed that spirulina consumption for 4 weeks reduced the time taken for the muscles to tire and improved the physical performance.

Morgan Johnson conducted a trial on 37 participants, who were treated with either placebo or spirulina. The trial concluded with the finding that spirulina improved metal fatigue and increased the physical activity.

Although research in arthritis patients have not been carried out so far, spirulina seems to be effective in fatigue reduction in them.

What does this mean? Spirulina can improve fatigue and physical activity which is studied by scientists. This effect can provide arthritis patients with better movement and less tiredness.

Spirulina is sold in the form of capsules, tablets, and powder. 7.5milligrams-8 grams per day can be taken as an effective oral dose for antioxidant and anti-inflammatory effects.

A dose of 1g per day for 12 weeks is found to be effective in reducing weight in obese patients. Different products are made with different strengths therefore, it is best to follow the instructions given by the manufacturer.

Spirulina has been consumed for years together as a dietary supplement and it has been safe in this regard.

Even though studies in animals have been rendered it safe, the use of this nutraceutical has been contraindicated in pregnancy and lactating women.

Beware of the spirulina you buy, as there is no standard given by the regulatory bodies it may contain contaminants.

Spirulina may contain heavy metal residues that could be toxic to your body. It is best to buy your product from authorized and credible suppliers.

Spirulina must not be taken by someone who suffers from phenylketonuria as their body cannot metabolize this dietary supplement.

It is worthy to mention that there have been some very rare cases of the adverse effect that could be caused by spirulina which manifested in the form of liver damage, skin reaction, and muscle pain.

Spirulina can interact with your regular medication such as warfarin (blood thinner medication). If you are taken any medication it is best to start taking this supplement after consulting your physician.

Spirulina, a natural dietary supplement that belongs to the blue-green algae family has been claimed to possess a variety of medical benefits to the human body.

Arthritis is an inflammatory condition that could benefit from spirulina intake as it is an excellent antioxidant which fights the toxins in the body.

Anti-inflammatory effect of spirulina has also been proven which can decrease inflammation-causing chemicals in arthritis patients.

Spirulina is found to be excellent is reducing weight which can be of paramount importance in arthritis patients. It is also studied for reducing fatigue which can promote physical activity in patients.

The use of spirulina in arthritis patients and their benefits need to be confirmed by large human trials to strongly recommend its use in arthritis.

Nevertheless, it should be considered as a promising natural supplement that has high potential n benefiting arthritis afflicted patients.