Crohn’s Disease is an Inflammatory Bowel Disease (IBD). It causes inflammation and irritation in the digestive tract.

It can affect any part of the gastrointestinal tract (GI) from mouth to anus, but it commonly affects the end part of small intestine (ileum) or the beginning part of the large intestine (colon).

There is no cure for Crohn’s disease. Certain medications, surgery, and diet changes may help relieve the symptoms.

Certain herbal medications are found to be effective in the management of Inflammatory Bowel Diseases(IBDs), including Crohn’s disease.

One such natural medication is aloe vera.

Aloe Vera is found to reduce symptoms of inflammatory bowel diseases and is used as a complementary and alternative medicine (CAM) supplementing other medications and therapies to ease the symptoms.

What is Aloe Vera?

Aloe barbadensis miller, or known as Aloe vera is famous for its healing and rejuvenating properties and can also be taken orally.

Aloe vera is a stemless herb usually grown in tropical climates. The leaves are thick and fleshy and green or grey-green in color. It is cultivated for its medicinal and ornamental use.

It belongs to the Lilacae family. The gel in the leaves contains polysaccharides which have several health benefits.

Aloe vera is universally known as a healing herb. It has been traditionally used for the treatment of various ailments.

Nowadays, the use of natural products is increasing as they are effective, inexpensive and have fewer side effects.

Several properties of Aloe vera are helpful and beneficial in the treatment of symptoms of Crohn’s Disease. 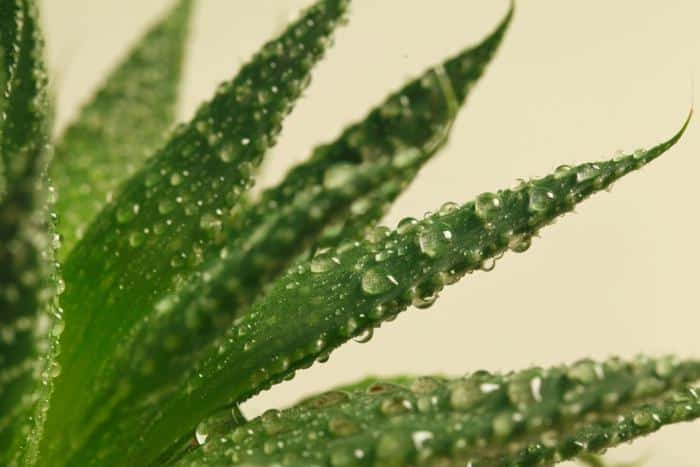 Inflammation occurs when a part of the body became swollen and reddened due to an injury or infection in that area. It often results in pain.

Inflammation of intestines is the most common and early symptoms of Crohn’s disease. Also, in severe cases, there may be inflammation in eyes, joints, and skin.

Aloe vera has an inflammation-inhibitory system. It contains various compounds that prevent inflammation and relieves it.

Prostaglandins are compounds in our tissues that send signals to the cells of the immune system to accumulate at the injury site and produce substances to fight pathogens.

This causes inflammation of that area.

During infection, interleukins in the body signal the immune cells to migrate to the site of infection.

Also, reactive oxygen metabolites, such as superoxide (O2) and Hydrogen peroxide (H2O2) are produced to strengthen the cell walls to protect them against pathogens.

Aloe vera reduces the prostaglandins and inhibits the cyclooxygenase pathway(which leads to the formation of prostaglandins), thereby preventing inflammation.

In addition to prostaglandins, it is also shown to have an inhibitory effect on the production of interleukins and reactive oxygen metabolites, all of which are responsible for causing inflammation in the intestines.

A study shows that the aloe gel extracts like aloin and aloesin, when taken as a dietary supplement decreases Leukotriene, an inflammatory mediator and Tumor necrosis factor-a (TNF-a), which helps in signaling the cells of the immune system during inflammation.

A novel compound called C-glycosyl chromone was recently extracted from Aloe vera that is known to show anti-inflammatory properties.

Bradykinin, a peptide found in our body, is an inflammatory modulator that induces pain. The peptidase bradykinase found in aloe vera breaks down this bradykinin and thereby relieves pain.

What does this mean? Aloe vera reduces inflammation or swelling resulting due to Crohn’s Disease in the digestive tract by reducing prostaglandins. This also reduces the abdominal pain and cramps that occur due to inflammation.

Aloe vera is an anti-oxidant. It prevents or delays cell damage caused by Crohn’s disease.

Antioxidants prevent or inhibit the process of oxidation. Oxidation occurs in various pathways of our body. It leads to the production of free radicals as by-products.

These free radicals need electrons to stabilize which they end up taking from the body cells. This damages the cells and may lead to cell death, causing illness and diseases.

But if free radicals outnumber the antioxidants, it causes problems. Thereby, it is important to obtain a maximum number of antioxidants from our diet.

Oxidation stress, which is the imbalance between free radicals and antioxidants plays a crucial role in the onset of inflammation and subsequently the aggravating of the disease.

Intestines contain various microbes, food and body cells and are a site for the production of free radicals. These free radicals lead to cell damage or injury and subsequently cause Crohn’s Disease.

A phenolic compound has been isolated from Aloe vera which is shown to have antioxidant properties.

What does this mean? The presence of antioxidants in Aloe vera makes it a beneficial alternative medicine for Crohn’s disease as it prevents cell damage in the intestines and prevents inflammation.

3. Aloe vera acts as an Immunomodulator in Crohn’s

Crohn’s is an immune related disease and regulation of the immune system is required to ease the symptoms.

The immune system gets activated due to several bacteria or injury that leads to swelling and inflammation.

When any foreign bacteria enter our body or bacteria of the intestines increase in number, the immune response is triggered by them. Several immune cells are released to fight against them.

It enhances the growth of fibroblasts which induce an immune response in case of tissue injury.

It also modulates the immune system by increasing the phagocytic activity(ingestion of bacteria by immune cells).

This will help in fighting off the bacteria or foreign substances that might have triggered the immune response.

They increase the production of cytokines. Cytokines are substances that include interleukins, interferon and growth factors which help in immune cell signaling and cell coordination.

They help in the release of nitric oxide from these cells. Nitric oxide has anti-bacterial action and helps in the elimination of harmful bacteria.

They also enhance the expression of surface molecules that are proteins present on the cell surface and responsible for cell binding. They are essential for a well-mediated immune response.

What does this mean? Aloe vera acts as immuno-modulator by improving immune cells’ synthesis and functioning. This leads to the elimination of harmful bacteria that might have caused the Crohn’s disease.

Aloe vera disrupts the growth of various pathogens in the gut that may lead to digestive problems.

It has antimicrobial and antibacterial properties that prevent the bacteria in the gut from causing infection. This ensures problem-free and efficient digestion.

Aloe vera contains phytosterols which help in the metabolism of glucose and lipids. This leads to improved digestion.

What does this mean? The process of digestion can be enhanced by Aloe vera due to its property of fighting the bacteria and improving metabolism by enhancing intestinal absorption.

Ulcers are caused as a result of inflammation where the cells of the immune system accumulate to fight foreign substances.

This is caused by prostaglandins which signal the immune system to do so.

Aloe vera reduces prostaglandins that cause inflammation and may further lead to ulcers.

Aloe vera contains polysaccharides, anthraquinones which control the gastric secretion and inhibit the formation of ulcers. It also reduces the size of ulcers and promotes ulcer healing.

What does this mean? In the severe cases of Crohn’s disease, mouth ulcers or ulcers in other parts of the gastrointestinal tract can be prevented or treated with aloe vera.

The presence of foreign bacteria or the increase in the number of bacteria that are naturally present in the gastrointestinal tract.

This is followed by an active response from the immune system that releases various immune cells, which accumulate at the site of injury or infection and cause inflammation.

It is important to get rid of these bacteria and prevent cell damage or injury which may further worsen the condition.

Aloe vera exhibits antibacterial properties. It contains various compounds that fight the bacteria of the gut and eliminates them.

It also fights against infection caused by the bacteria. Severe conditions of Crohn’s may lead to the development of fissures and abscesses that are spots for infection. Aloe vera inhibits and prevents the growth of bacteria in such areas.

What does this mean? Aloe vera helps in fighting off the unwanted and harmful bacteria of the gastrointestinal tract and ease the symptoms of Crohn’s disease.

However, the dosage usually depends on the purpose of use and severity of the disease.
There are two main preparations of Aloe vera available: Aloe gel or Aloe latex.

Aloe gel is extracted from the leaf pulp of the plant, Aloe barbadensis.

Aloe latex is the yellow liquid found under the leaf.

Aloe vera juice (available commercially) usually consists of the juice of the entire leaf including gel and latex.

For Crohn’s disease, it is not advisable to consume the latex leaf lining as it contains anthraquinone glucosides, which has a strong laxative effect. It can cause stomach cramps and diarrhea.

Therefore it is important to seek medical advice before deciding on taking Aloe vera juice for Crohn’s.
Aloe vera is also available in the form of pills.

Precautions to be taken with aloe vera

Anyone who is considering a Complementary and Alternative Medicine(CAM) should first consult with a doctor.

It should be used as a supplement and not as an alternative to the prescribed medications and therapies.

Also, it is important to keep in mind the severity of the disease and the symptoms. Your medical professional will be able to advise you if you can consume Aloe vera based on your symptoms.

Aloe vera, when taken orally, also has a laxative effect and it could create problems for people with diarrhea.

Aloe vera juice available commercially may have latex which is a strong laxative.

It may result in cramping of the intestines, abdominal pains, nausea, vomiting, and electrolyte imbalances.

Aloe vera products are not regulated by the government, so one cannot be sure of its purity or constituents.

As Crohn’s disease is an immune-related disease, one should be careful while taking aloe vera while having an overactive immune system.

Antimicrobial activity of Aloe vera may kill the useful and naturally present bacteria of the gut that aid in digestion, in addition to fighting the harmful bacteria. These may cause digestive problems.

If you experience any problems after taking Aloe vera or encounter any allergic reactions, discontinue the use.

Aloe vera is easily available around the world and is quite inexpensive. It also has lesser side effect compared to the drugs and medications available in the market.

It is a combination of various beneficial properties as it is anti-inflammatory, antioxidant, anti-microbial and immunomodulator, all at the same time.

It is one remedy for various problems and has the potential to become a multipurpose medicinal agent.

As conventional therapies for Inflammatory Bowel Disease(IBD) are not very useful in preventing relapse and cause side effects, 50% people take alternative medicines.

Aloe vera has proven benefits for people with Inflammatory Bowel Disease(IBD) and people with Crohn’s disease will benefit from these properties if taken with care and precautions.