Hot Flashes can be defined as rapid and intense heat dissipation responses mainly occurring during the menopausal phase of women life.

Reports have indicated that 75% of perimenopausal and postmenopausal women in Western societies experience hot flashes symptoms.

Hot flashes syndrome can be characterized by excessive sweating, feeling of intense internal heat and peripheral vasodilation.  Intense sweating is observed mostly around the face, neck, and chest.

In some hot flashes also results in symptoms such as anxiety, nausea, disturbed sleep, extreme depression, dryness in eyes and vagina, the feeling of suffocation and inability to concentrate.

Scientist believe that all these symptoms in menopausal women are associated with depletion of estrogen level in women’s body which can occur due to ovarian failure during this stage of life.

Menopause is a phase in women life when they experience the permanent absence of menstrual periods. Menopause mostly occurs naturally at the age of 50 and above, but can also be caused by surgery, chemotherapy and radiation treatment.

Researchers have indicated that hot flashes are normally triggered by a small increase in core body temperature acting (Tc) within the narrowed zone.

Therefore a relaxation-based method in one study involving paced respiration proved that it is effective in reducing hot flashes occurrence of hot flashes by 50% significantly with no adverse effect.

And it is also observed that there are a number of home remedies such as the use of coconut oil which helps in alleviating the symptoms of hot flashes. 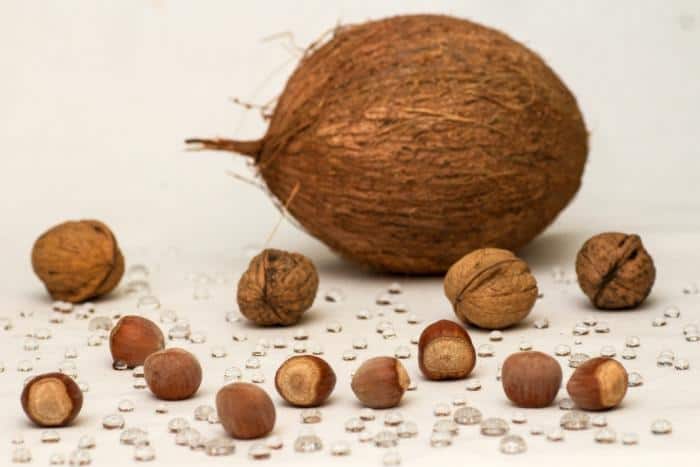 Coconut tree also is known as “kapavriksha” in Sanskrit was used by man from traditional times for its medicinal and other uses due to its various properties that include antibacterial, antioxidant, antiparasitic, antidermatophytic etc.

Along with the other components of a coconut tree, coconut oil which is extracted from its copra by enzymatic or solvent extraction process, also possess numerous medicinal properties.

Coconut oil is found to be effective against bacteria, fungi, and even viruses.

And because of its antibacterial, anti-fungal, anti-inflammatory, and healing properties, it is used effectively in home remedies against various skin infections like wounds, cuts and eczema and also found beneficial in reducing pain from other health-related problems like hemorrhoids and hot flashes. ,

As described earlier, hot flashes are mostly seen in women going through her menopause cycle, they experience rapid rise and fall in their body temperature.

Scientists have indicated that these temperature difference can be due to the hormonal imbalances which can occur during this phase.

It is believed that coconut oil can naturally control these hormonal imbalances in women thus giving them relief from symptoms of hot flashes.

It is also recommended to use natural oils including coconut oil, hempseed oil, and flaxseed oil in the diet of menopausal women as these natural products are found to increase hormones in the body.

And they also provide healthy nutrition to the body to overcome other symptoms of hot flashes like sweating, palpitation etc.

It is also strictly recommended for menopausal women to cut down on animal fats and other inflammatory foods such as gluten, soy, sugars, and excess alcohol, as these food are believed to increase the symptoms of hot flashes.

Studies have shown that coconut oil is the rich source of unique fat molecules known as medium chain fatty acids molecules (MCFA) which are also referred to as “healthy fats” as compared to animal fats.

These MCFA fats are considered to be easily digested and metabolized by the body making them healthier options as compared to animal fats.

Coconut oil can be also applied topically on scalp and hair in such women to relieve them from night sweats and cools down their temperature.

This is because studies have shown that coconut oil possesses excellent anti-inflammatory and strong healing power.

And this excellent properties of coconut oil makes it an ideal home remedy in the treatment of symptoms of hot flashes in menopausal women where it acts as a natural healer.

How to use coconut oil for hot flashes

Coconut oil can be used in two ways in the treatment of hot flashes, both topically and internally as part of the diet. In both cases, it is found to be effective.

Coconut oil as part of diet:

Avoid totally animal fat (rich in phosphorus) in the diet as they increase the problems associated with hot flashes as they leach out calcium from the body thus making bones weak in menopausal women.

Apply a generous amount of coconut oil on scalp and hair as a heavy coating before going to bed.

Wash thoroughly with shampoo and fresh water in the morning.

This will give relief from night sweating and will also reduce fluctuation in body temperature, generally experienced by menopausal women at night. This will give better sleep for such patients.

READ THIS NEXT -
Cinnamon for Menstrual Cramps
5 Ways Fats Can Actually Help In Weight Loss
4 Surprising Benefits of Maca for Anxiety + Dosage, Precautions
How Manuka Honey Reverses Drug Resistance & Fights Superbug-MRSA
Benefits of Cocoa for Heart Health
Coconut Oil : Why It Benefits in Jock Itch & How to Use It