Spirulina is the biomass made of cyanobacteria (Blue-green Algae).

The common name could be misdirecting since spirulina is a mass of bacteria and not algae.

Most common species used for dietary supplements currently are S. platensis and S.maxima.

Spirulina is nutritious due to multivitamins, minerals and other nutrients present in it.

Diabetes mellitus is a group of metabolic diseases where the blood sugar level of an individual is persistently high for a long duration of time.

Insulin does this by directing cells to increase their glucose uptake. A deficiency in the production of insulin or the failure of cells to respond to the hormone is what causes diabetes.

It can be autoimmune (Type 1 diabetes) or due to genetics and lifestyle choices (Type 2).

Gestational diabetes is also another type of diabetes, wherein women develop diabetes during the duration of their pregnancy.

Uncontrolled sugar levels can have adverse effects on an individual’s health. It can lead to complications and decrease one’s quality of life. 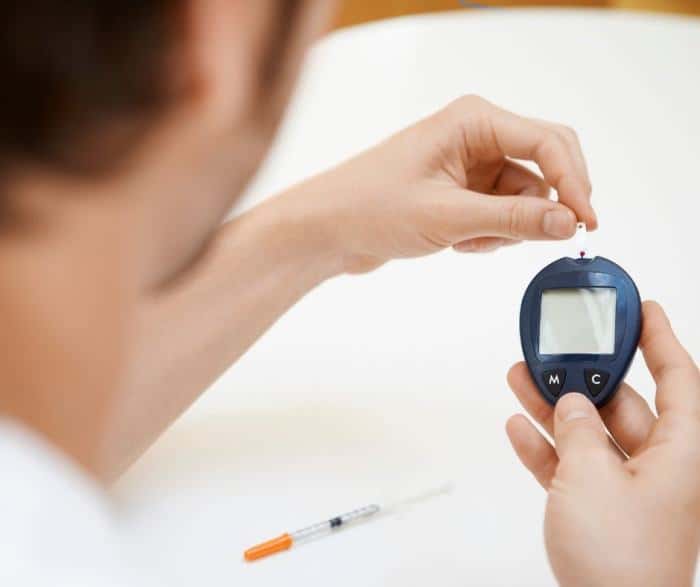 5 Benefits of Spirulina For Diabetes

Here are a few studies that explore the benefits of spirulina for diabetes:

For diabetic patients, it is absolutely necessary to keep their sugar levels at check.

Experiments have been conducted in order to understand whether spirulina could influence one’s sugar level and keep it normal.

In an animal study treatment with spirulina resulted in a significant decrease in fasting blood glucose level and an increase in the level of glycogen (glycogen is a storage form of glucose).

Also, activities of antioxidant enzymes such as catalase and GPx increased. [1]

The effects of spirulina have also been tested in Type 2 diabetic patients.

One Group had to consumed Spirulina tablets (2g/day for 2 months), whereas the other group formed the control group. (subjects in the control group aren’t administered any treatment and are used as means of comparison).

Spirulina was attributed to containing a protein similar to that of insulin.[3] This could probably explain its hypoglycemic effects.

Other than that, Phycocyanin present in Spirulina has known to lower blood glucose levels in animal models. [4]

Phycocyanin obtained from spirulina has also shown to improve liver glycogen levels in an animal study (glycogen is the storage form of glucose. [5]

Selenium present in spirulina protects pancreatic cells, responsible for the secretion of insulin, from damage that could impair insulin secretion. [6]

What does this Mean? Spirulina can lower blood glucose levels and the occurrence of hyperglycemia (high sugar levels).

One of the major complications of having diabetes is incurring dyslipidemia. This is commonly termed as diabetic dyslipidemia.

Dyslipidemia is the phenomena of having abnormal blood lipid levels.

The main features of diabetic dyslipidemia are high plasma concentrations of triglycerides, low HDL concentration (good cholesterol), the Increased concentration of LDL in the body.

37 diabetic subjects were divided into two groups of which one group had to consume spirulina.

All 37 subjects had type 2 diabetes. They were asked to consume 8g of spirulina per day for 12 weeks.

In fact, the reduction in lipid levels was higher amongst patients with much-elevated levels of triglycerides and LDL, indicating that supplementing spirulina was effective for patients having dyslipidemia (abnormal lipid levels) [7].

A study on animal models reported similar findings. The levels of HDL cholesterol or good cholesterol was also found to be increased. [8]

The presence of phycocyanin and antioxidants such as vitamin c and beta carotene contribute to hypolipidemic effects.

Phycocyanin is a pigment present in spirulina. It is also a powerful anti-oxidant that can scavenge free radicals and factors responsible for oxidative stress.

It is an event that’s set off a chain of steps that eventually leads to plaque formation.

Phycocyanin’s ability to “nip the problem at its bud” i.e. prevent lipid peroxidation contributes to preventing the risks of cardiovascular diseases. [9]

Spirulina is rich in vitamin c and beta carotene [10]. Beta carotene is also an antioxidant.

It was known to not only improve insulin resistance observed in diabetics but also contributed to lower levels of triglycerides, LDL (bad cholesterol).

5-10% of spirulina’s dry weight is lipids. Of its total fat content, 20% of it is gamma linoleic fatty acid. It is an unsaturated fatty acid. [12]

What does this Mean? Spirulina contains nutrients that help diabetic patients suffering from dyslipidemia. It decreases the levels of unneeded cholesterol in the body that pose health risks and raise the levels of good cholesterol. It promotes healthy functioning of the cardiovascular system

3. It is a Natural Antioxidant

Oxidative stress is a major event occurred in diabetic patients. Free radical species are formed by oxidation of glucose that is present in the blood.

Oxidation of lipids and membrane proteins to occur.

This causes the generation of even more free radicals, thus giving rise to a cycle of events that can lead to the accumulation of a large number of free radicals.

This event was marked by a decrease in the activity of antioxidant defense systems that combat or eliminate free radicals. This phenomenon, in general, is known as oxidative stress.

Oxidative stress is the reason diabetic complications such as nephropathy or damage to renal system and neuropathy; damage to nerves occur. [14]

An animal-model based study has proven that the consumption of spirulina reduced the levels of MDA or malondialdehyde.

Similar results were obtained when a study was conducted using 37 volunteers. The levels of MDA had reduced. [16]

This meant that spirulina could alleviate oxidative stress.

In an animal – model-based study, oral administration of phycocyanin derived from spirulina was found to normalize urinary and renal oxidative stress markers.

Administering phycobilin a chromophore component of spirulina had produced the same effects.

Along with this phycocyanobilin, bilirubin and biliverdin prevented superoxide production in renal cells. [17]

Thus, spirulina was specifically found to prevent nephropathy or damage to kidney cells.

Other than that, Antioxidant properties of spirulina have been attributed to the presence of compounds such as linoleic acids, Beta carotene, tocopherol, and as previously mentioned, phycocyanin.

Phycocyanin has also known to prevent cell death of pancreatic beta cells (secrete insulin) by eliminating reactive oxygen species and enhancing the activities of antioxidant enzymes such as superoxide dismutase (SOD) and GPx.

What does this Mean? Spirulina can alleviate oxidative stress and prevent damage to nerves and kidneys that is usually occurs as complications due to high sugar levels in diabetics.

Non-alcoholic fatty liver disease is the deposition of fat in the lover due to reasons other than alcohol consumption.

One of the preliminary causes of NAFLD is diabetes. People with type two diabetes are at a larger risk of developing NAFLD.

Also, Increased hepatic (liver) lipid storage is an abnormality in insulin-resistant women with a history of gestational diabetes. [19]

Supplementing spirulina had also reduced the chances of diabetes [20].

An increase in high-density lipoprotein or HDL was observed in patients having NAFLD.

Consuming spirulina also resulted in weight loss amongst the volunteers.

The study concluded supplementing spirulina highly benefitted those suffering from NAFLD and helped them lead a better quality of life. [21]

Similar findings were observed at a dose of 4.5g of spirulina per day for three months. [22]

Spirulina was able to do this by reducing liver toxicity, hepatic lipid peroxidation (oxidation of lipids present in the liver) and hemorrhage thus preventing liver damage [23].

It also suppresses inflammation by suppressing tumor growth factor beta 1 and hepatocyte growth factor. It has also shown to reduce hepatic brain injury due to its antioxidant activity [24].

What does this Mean? Spirulina can prevent NAFLD related to diabetes. It can also help diabetic patients with NAFLD lead a better quality of life.

5. It Benefits in Wound Healing

Delayed wound healing is often a condition observed in diabetics. Sometimes, the untreated wound can progress to an extent such that, amputation is done.

Thus, it is critical for diabetics to keep their sugar levels in check and avoid wounding.

If wounded, a diabetes patient should always take care of the injury and consciously keep observing it in order to avoid any serious complications.

Laboratory experiments on human dermal cells have shown that spirulina could accelerate wound healing and helped in the closure of the wound area.

They helped speed up the process of cell proliferation and migration of HDF cells (human dermal fibroblast cells).

Presence of components such as cinnamic acid, naringenin, kaempferol, etc. was responsible for the wound healing potential of spirulina. [25]

What does this Mean? Spirulina can possibly accelerate wound healing in diabetic patients and prevent risks of infections and amputation.

Dosage of Spirulina For Diabetes

Dosage of spirulina can vary according to needs.

It is available either in the form of tablets or powder.

The powdered form can be added to make smoothies for consumption.

Bacteria are known to produce toxins such as microcystin.  This toxin may not be produced by spirulina itself but other bacteria that could have contaminated it.

Some patients have reported stomach pain, nausea, and vomiting after consuming spirulina.

It has also known to increase immune responses which is why individuals suffering from autoimmune attacks must possibly avoid spirulina.

Spirulina is rich in iodine, therefore, it must be taken with caution in case of thyroid disorders.

Although no harm has been recorded, pregnant women are generally advised to avoid spirulina. [26]

It is, however, important to use a trusted recognized brand of spirulina supplements in order to reap positive benefits.