Cinnamon is one of the most popular spices.

How can you not fall in love with its aroma!?

Cinnamon is the bark of the cinnamon tree which rolls to form what is known as a quill.

It is either available as rolls or as ground powder.

Cinnamaldehyde, cinnamyl acetate, and cinnamyl alcohol are few of the active constituents of cinnamon.

The essential oil can be extracted from this spice which has antiseptic and anesthetic properties.

Interestingly research proves that cinnamon is beneficial for the treatment of cholesterol, diabetes, obesity, and inflammation.

1. It cuts down fat tissue as well as fats present in our blood

A study was conducted to evaluate the anti-obesity effect of plant extracts on animal models.

Among the various plant extracts screened, apple and cinnamon were found to have the most potent anti-obesity property.

A water-soluble extract of cinnamon was tested for its effect on metabolic syndrome in humans.

Individuals consuming this supplement experienced an increase in lean mass and decrease in fat mass.

Improvements in blood glucose and blood pressure were observed.

It was concluded that this spice can be helpful in reducing risk factors associated with metabolic syndrome and diabetes.

Chromium, magnesium and cinnamon supplementation to manuka honey is associated with weight reduction and improvement in blood lipids in humans.

Cinnamon is rich in antioxidants, vitamin A and B as well as minerals such as iron, manganese, zinc.

Cinnamaldehyde is an active component of the spice imparting taste, aroma and a variety of health benefits.

Cinnamaldehyde is proven to suppress weight gain and visceral fat (fat around organs) deposit by activating a protein named TRPA1.

TRPA1 is present in the gastrointestinal tract and its function is to regulate gastric emptying and food intake.

Another research study reports that cinnamaldehyde prevents the development of fat cells and production of fats by downregulating the activity of a protein PPARG (Peroxisome proliferator-activated receptor gamma).

This protein is responsible for absorption and deposition of fat.

Other polyphenols found in cinnamon are proven to beneficial in reducing body fat, inflammation, cholesterol and improving glucose and insulin levels by affecting genes and proteins involved in lipid metabolism. 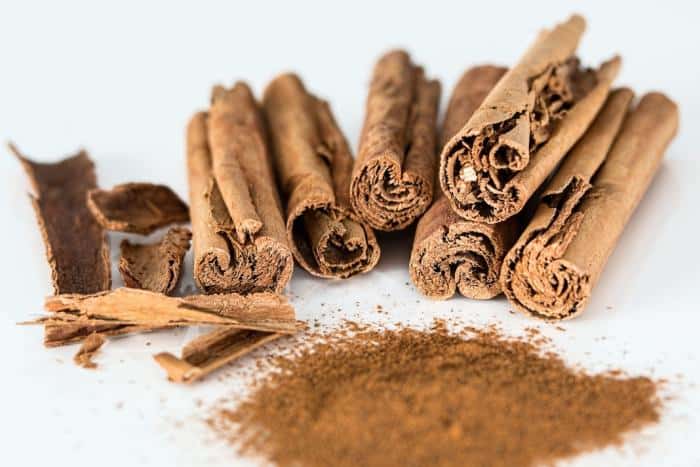 3. It controls sugar levels which contribute to appetite control

Controlling blood glucose levels after a meal is essential in the treatment of diabetes.

Also reduced glucose levels are said to be responsible for satiety and appetite control.

A review of 8 clinical studies reports that cinnamon is effective in controlling blood glucose levels in diabetes patients.

Addition of cinnamon to cereals is reported to lower post meal blood glucose in normal and obese individuals.

4. It is an anti-diabetic agent and helps address obesity-related diabetes

Improvement in parameters related to diabetes such as glucose and insulin levels can help lose weight.

A meta-analysis of 10 clinical trials reports that cinnamon at 120mg/day to 6g/day for 4-18 weeks can reduce glucose, cholesterol, and blood lipid levels.

It also improves insulin sensitivity, thereby serving to be therapeutic in obesity-related diabetes and hypercholesterolemia. [4,5,6]

5. It aids in digestion

It does so by promoting the activity of the previously mentioned protein, TRPA1 and reducing the concentration of ghrelin (a hormone that increases appetite).

It also promotes the activity of genes that support oxidation of fats.

It also slows down the activity of enzymes involved in carbohydrate digestion such as α-glucosidase and pancreatic α-amylase.

This property is of use in treating diabetes.

How to take Cinnamon for Weight Loss?

There are several types of cinnamon available in the market.

Cassia and Ceylon are the most popular.

Cassia cinnamon has higher % of coumarin in it. Thus it is best to use Ceylon cinnamon for use.

A large dosage of cinnamon should not be taken for a long period of time (6+ weeks). More details here>

A dose of ½ to 1 teaspoon (up to 6 gram) of cinnamon powder daily for less than 6 weeks is recommended and said to be safe.

As a spice (very small quantities) one can use cinnamon for a very long time without any side effects.

Addition of this powder to cereals, porridges, and toast is a delicious way of incorporating the spice in breakfast.

You can also add it to curries and other savory items to enhance flavour and reap health benefits simultaneously.

You can also prepare cinnamon tea ( recipe here) by boiling 1 cinnamon stick or around 3/4th teaspoon of cinnamon powder in water.

Brew it for 2-3 minutes and strain it. Add honey or jaggery to taste.

Excessive consumption of cinnamon can cause mouth soreness.

Cinnamon should be avoided in pregnancy and lactation.

Cinnamon can lower blood glucose levels, therefore, should be taken with care in case one is already using anti-diabetic medicines which lower blood sugar.

Cinnamon contains coumarin which may affect liver functioning and should be avoided if suffering from liver disease.

It is also advisable to discontinue cinnamon use prior to surgery.

Cinnamon does help with weight loss but over the time say around 6 to 12 weeks. It is advisable to try it for a month and observing its effect before prolonging its use.

Cinnamon is rich in antioxidants and essential oils. It can help reduce obesity-related risks like cardiovascular diseases, diabetes etc.

And finally, irrespective of these reasons, cinnamon’s aroma, and spicy sweet taste will just make you fall in love with it. So you are left with no choice but to relish it!

READ THIS NEXT -
An Evidence Based Guide To Choosing Healthy Fats
Does Cyperus Rotundus Help In Weight Loss?
Ingredients in Argan Oil and their Benefits
Cinnamon Health Benefits For Women

1 thought on “5 Evidence Based Weight Loss Benefits of Cinnamon”