Obesity is manifesting as a global epidemic. And losing weight is definitely not an easy task.

So it is pretty common to look forward to some medication or supplement that could make weight loss a tad bit easier.

But from a myriad of options available it is difficult to ascertain which one is actually effective.

Today we are going to cover Conjugated Linoleic Acid, a weight loss supplement that you must have already heard of.

What is Conjugated linoleic acid?

It is polyunsaturated fat.

CLA can exist in 28 different structures. It is found mainly in dairy and meat products.

Active research on CLA began in 1979 when researchers at Uthe niversity of Wisconsin studied the anti-carcinogenic properties of beef extract.

Later CLA was discovered and was famous for its anti-cancer properties.

A number of research studies were conducted and it was found that CLA has body fat reducing property.

Two important structures of CLA are c9t11 and t10c12. These names just describe position of double bonds in the structure.

CLA exists as a ‘trans’ and ‘cis’ fatty acid. So it is technically a ‘trans’ fat but it is obtained from natural sources unlike the unhealthy industrial ‘trans’ fat.

However, the t10c12 isomer is found to be biologically more active in terms of fat loss.  CLA in supplement form is not obtained from natural foods but derived by chemical alteration of vegetable oils.

How does CLA cause weight loss?

CLA is perhaps one of the highly researched weight loss supplement and we will be going through different studies to find out how helpful CLA is for weight loss.

A study that is popularly quoted when it comes to CLA’s body fat lowering effect is the one that is published in The Journal of Nutrition, 2000.

All groups lost weight but the effect was significant in high dose group. An average of 6 pound loss was observed.

A 12 week clinical trial  was conducted where volunteers received 1.7 g of CLA in milk twice daily.

At the end of 12 weeks, a decrease in body weight, BMI, fat mass and waist to hip ratio was observed in CLA treated group.

A Swedish study reported a decrease of 3.8% of body fat during a 3 month CLA treatment.

Research  suggests that CLA supplementation can cause a decrease in body fat in specific regions such as legs and trunk region and this effect is pronounced in women.

It was found that compared to CLA treatment, the placebo group experienced greater weight gain during the holiday season.

A meta analysis of 18 clinical trials reveals that a dose of 3.2g of CLA per day for 6 months causes a modest loss of body fat in humans.

What does this mean? A number of clinical trials on humans show that CLA indeed reduces body fat. This has been proven in children too. A dose up to 3.2g is found to effective for fat loss. Research proves that CLA can even prevent holiday weight gain! 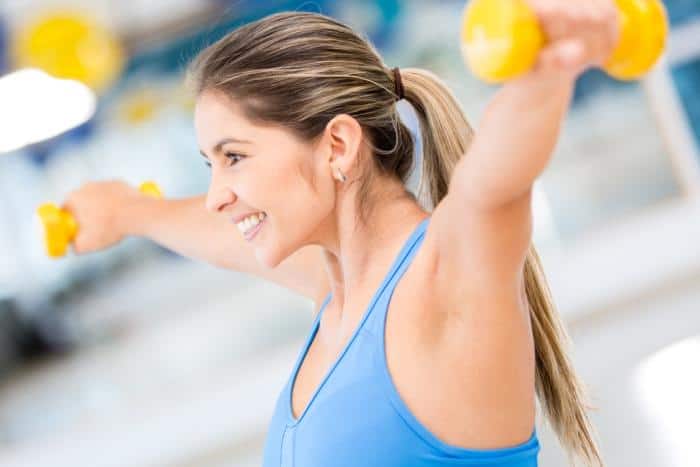 A clinical trial  conducted in North Carolina reported that 12 week supplementation of 6.4g of CLA/ day resulted in an increase of 0.64 kg of lean mass in obese individuals.

Researchers conducted a study  where individuals received a very low calorie diet after which for 13 weeks they received CLA.

CLA supplementation is found to affect energy expenditure and increase the utility of fat as an energy source even during sleep.

However a study  conducted in the University of California, Davis 64 day supplementation of CLA (3g/day) produced no significant effect on body composition or energy expenditure.

What does this mean? It is said that CLA supplementation can lead to weight gain in long term. However this is gain of fat free mass and muscle is a metabolically active tissue so CLA leads to increase in metabolism.

Not only does CLA reduce total body fat but it also gets rid of stubborn belly fat.

25 abdominally obese individuals were recruited for a 4 week clinical trial  where they received 4.2g of CLA per day or placebo.

At the end of the study, a significant decrease in abdominal circumference was seen individuals who were given CLA supplements.

What does this mean? Research on humans shows that CLA supplementation for 4 weeks reduces belly fat.

A study  was conducted in the Netherlands where subjects were kept on a very low calorie diet for 3 weeks after which for 13 weeks they received 1.8g or 3.6g CLA or placebo every day.

Appetite and food intake at breakfast the next day was measured to observe whether CLA controls appetite.

Individuals lost around 7% of their initial body weight and a decrease in appetite was seen over the 13 weeks.

However, no reduction in energy intake at breakfast or improvement in body weight maintenance was seen.

What does this mean? 13 week treatment with CLA is found to reduce appetite but limited studies are available to validate CLA’s effect on appetite.

It works in combination with other weight loss interventions

CLA in combination with dietotherapy is found to decrease body fat by 10% and waist circumference by 6.5%.

Dietotherapy is typically altering diet and food choices to treat a disease.

Research claims that CLA in combination with proteins (whey and creatine) increases strength and muscle mass during heavy resistance training.

CLA in combination with amino acid mixtures is found to increase fat burning effect of exercise.

One study states that CLA supplementation has no effect on the potential of aerobic exercise to reduce body fat or improve blood lipid levels.

What does this mean? CLA works well with a low calorie diet to induce weight loss. It increases strength and muscle mass in response to strength training. However it does not potentiate weight loss effect of aerobic exercise.

Therefore food companies are now able to add CLA to their products.

14 women suffering from metabolic syndrome were recruited for a study where they received strawberry jam enriched CLA along with low calorie diet.

Researchers found that CLA enriched food led to a reduction in body fat by the end of 30 days which lasted throughout the 90 day period of the trial.

A study  conducted in France demonstrated that 98 day supplementation of CLA enriched yogurt had no effect on body composition but an increase in metabolic rate was observed.

What does this mean? Milk enriched with CLA is found to be beneficial for weight loss. However some research studies show that this is not the case with other dairy products like yogurt and butter.

A meta analysis of 15 clinical trials  was conducted and researchers felt that CLA supplementation does not cause any clinically significant changes in body composition.

Adverse events such as constipation, diarrhoea, and soft stools were reported.

A review study  investigating the safety and efficacy of CLA supplements takes into account that that CLA supplementation prevents body weight gain and fat accumulation in animal models but it reports that dietary supplements are not effective weight loss agents in humans and can cause adverse effects.

Other review studies also comment that there is insufficient data to conclude that CLA has a pronounced effect on body weight and composition.

Larsen et al report that a 3.4-g daily CLA supplementation for 1 year does not prevent weight or fat mass regain in a healthy obese population.

Similar results were obtained from an 8 week study.

A study  investigating the effect of different CLA isomers on body weight reported that a dairy drink supplemented with CLA had no significant effect on body weight.

What does this mean? And as always there is some conflicting evidence available that states that CLA is perhaps not as effective as it is thought to be for weight loss.

The primary source of CLA is from animal products obtained from ruminants such as cow, goats, sheep etc.

The CLA content of the food depends on the kind of fodder the animals get.

CLA content is 300-500% higher in animal products obtained from grass fed animals than those who are fed grains.

Kangaroo meat has a high concentration of CLA. Eggs are also rich in CLA. Mushrooms like ''Agaricus bisporus'' and ''Agaricus blazei'', are a vegetable source of CLA.

However, obtaining CLA from natural sources is not such a good idea because the amount you would require to cause a clinical effect would involve consuming many calories.

The recommended dose for CLA by research studies is somewhere between 3 to 6 grams per day.

It is best to consult a doctor for the right dose and duration of treatment.

There are not any significant or commonly observed adverse effects reported about CLA consumption.

However, some studies report negative effects on cholesterol, blood lipid profiles and an increase in insulin resistance associated with a large dose of CLA.

Therefore it is advisable to consult a doctor for the dose and feasibility of taking CLA supplements.

CLA ‘s body fat lowering effect seems to be quite promising as far as research is concerned.

However, you can’t possibly obtain it from natural sources, which is why you would have to take supplements.

Also, we can’t ignore the view point of scientists who say that CLA causes only slight changes in body composition.

Also, some studies do report that CLA affects the liver and causes insulin resistance.

However the efficacy of supplements depends on different individuals’ body type.

As always we would again recommend you to consult a doctor before you take CLA or any other supplement. Also, CLA will not change your eating habits or lifestyle. So if you are looking for something permanent, then there are no shortcuts for weight loss.