Acne is one of the most common chronic skin disorders affecting millions of people around the world. According to an estimate, approximately 17 million people are affected by it at any one point of time in the United States of America only.

The primary cause of acne breakout is changing in the level of internal hormones, more specifically androgens.

The major symptoms of acne vulgaris include a breakout of pimples, whiteheads, blackheads, and inflammation of the skin accompanied by redness and scarring.

Sometimes the inflammation reaches deep down the skin developing into cysts and nodules and acquiring a severe form.

The good news, however, is that over time a lot of medications have been developed to prevent if not cure the problem of acne breakouts.

This includes anti biotic, anti retinoid, Accutane, oral contraceptives and various other herbal and home remedies, minerals and vitamins. This article shall discuss the effectiveness of fish oil in treating acne and determine its efficacy in the same. 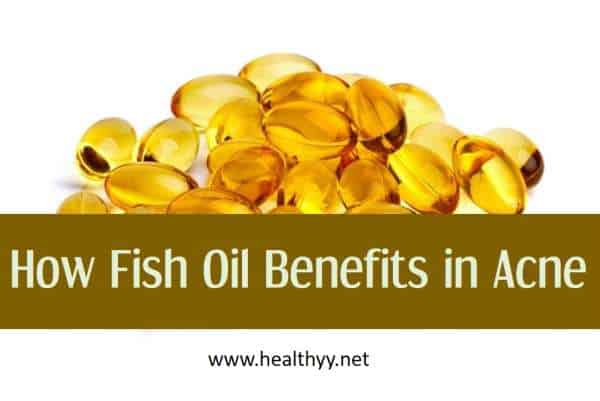 What is Fish oil and How it Benefits in Acne

It is a kind of oil extracted from the tissue of fishes. It is an extremely rich source of omega 3 fatty acid. However, these fatty acids are not produced by the fishes themselves but accumulated through their prey accompanied with the accumulation of active anti oxidants like iodide and selenium.

The consumption of some of these fishes from which fish oil can be derived has been limited by the Food and Drug Authority of the United States of America owing to their large toxic contamination.

This fish oil has been used since a long time to serve as a solution to various health problems like cardiovascular diseases, blood pressure problems, eye sight problems, age related muscular regeneration among other things.

It has often been suggested for conditions like diabetes, asthma, and dyslexic. Fish oil has also been known to benefit skin health and is used in various conditions of acne and psoriasis.

How does it treat acne

While its anti oxidant property helps in fighting the acne causing bacteria and reducing oxidative stress, its anti inflammatory property is effective in controlling the acne induced inflammation thus affecting a considerable decrease in the resultant swelling and redness.

Omega 3 also benefits one psychologically by easing out depression and stress. This is an additional benefit because of stress though not a contributor to the cause is certainly effective in alleviating the condition.

Additionally, omega 3 fatty acid contains prostaglandins that have a pivotal role in regulating the production of sebum.

How to use Fish Oil for Acne

Fish oil can be used for the treatment of acne either by topical application or by its inclusion in the diet or oral intake through supplementation.

For topical use, it can be taken on a cotton ball and applied on the affected area as a spot treatment.

It can be washed off after some time. When taking it orally, you can begin by starting with ½ tablespoon a day which can be increased later on with time to 1 tablespoon and so on.

You, however, must make sure not to indulge in over dosing.

Fish oil has been known to have various health benefits. Some of them are enumerated below:

Fish oil is extremely beneficial for the general bodily and skin health. However, in cases of over dose, there might be risks of some side effects. Some of these side effects are enumerated below:

In order to prevent yourself from suffering any of these side effects as well as to ensure maximum effect on your skin health and otherwise, you must make sure to follow the following precautions:

Fish oil is known to interact with the under given medications/ drugs and their use simultaneously must be avoided:

Fish oil is known decrease blood clotting. When taken with anti coagulants, it might increase the risk of bruising and bleeding

We did an analysis of online consumer review to determine the effectiveness of fish oil in the treatment of acne breakouts based on the experience consumers have had while using this oil. Here is a summary of what they liked and dislike about it:

Acne clear: A lot of consumers were very convinced of its effectiveness in treating acne, they said that after a few months use, fish oil made their skin absolutely clear

Bright: Many consumers were of the view that fish oil improved their complexion making the skin brighter. It helps in affecting an even skin tone. This was n added benefit for the consumers

Soft skin: Most consumers praised fish oil for an overall improvement in their skin texture. It had made their skin soft and smooth like it had been never before.

Breakouts: Some consumers complained that application of fish oil and its use for a few days caused a breakout in their faces.

It has however been suggested that it might be because of allergy or over consumption/ application. These cases have been extremely rare though.

These fatty acids with their anti oxidant and anti inflammatory properties attack the problem of acne from two sides. The side effects are minor and will not occur if used safely and with precaution. It is a natural supplement and very likely to serve as a solution for your skin troubles.