Acne is a chronic skin disease often commonly characterized by pimples that can cause scarring of the skin.

According to a data from the US Census, the lifetime prevalence of acne approaches 90%. The primary cause of acne breakouts has been attributed to hormonal surges before and after puberty and it therefore typically affects adolescents though it may or may not persist on to their adult lives.

Acne outbreaks are common to both gender but are typically more common and earlier in women than in men and affect the affects the area with a greater number of oil glands and is, therefore, more common in people with oily skin. Its symptoms include over secretion of sebum, scarring through a pimple and cysts and nodules in severe cases.

The usual causes of acne include an increase in the level of androgen which causes the sebaceous gland to secrete more sebum which is a stimulant of acne. The dead skin cells accumulate on the skin preventing any outlet of the sebum which gathers under the skin providing an environment under which bacteria can thrive and grow and thereby causing acne breakouts.

However, there are available many forms of treatment for acne vulgaris which includes antibiotic, anti-retinoids, oral contraceptives among others. One of the most effective and time effective treatments of acne vulgaris is Isotretinoin or rather Accutane as it is popularly known.

Isotretinoin, commonly known as accutane is a retinoid, that is, it is related to vitamin A and is thus naturally present in our body in small quantity.

Though the exact functioning of Accutane in the treatment of acne vulgaris is still doubtable, it is believed to help in the reduction of acne breakouts by reducing the sebum level in two ways.

Firstly, it alters the oil producing ability of sebaceous glands and secondly, it decreases a number of bacteria that already exists in the gland

It has been recommended and advised that because of the severe side effects that it may cause, it dose must be limited to 0.5 to 1.5 mg/kg/day.

It must be consumed only through the prescription of a licensed medical practitioner and should be accompanied by a meal to facilitate better absorption of the medicine.

Accutane tablets/capsules should be taken two times a day and must be swallowed with the help of a liquid. The tablet/capsule should under no condition be chewed or sucked or it might hurt the esophagus.

It must be stored at room temperature away from excess heat and moisture. Unused medication should be thrown away and the proper disposal of this medication must be discussed with the doctor.

Benefits over other medications

Accutane claims superiority over all other means of treatment that have been developed for acne vulgaris. It primarily occupies this position because of two reasons, firstly according to a study by the Food and Administration of the United States; Accutane causes a greater reduction in the size and frequency of cystic acne when directly seen in contrast with antibiotic medication. Accutane is also quick and time effective when compared with other medications. 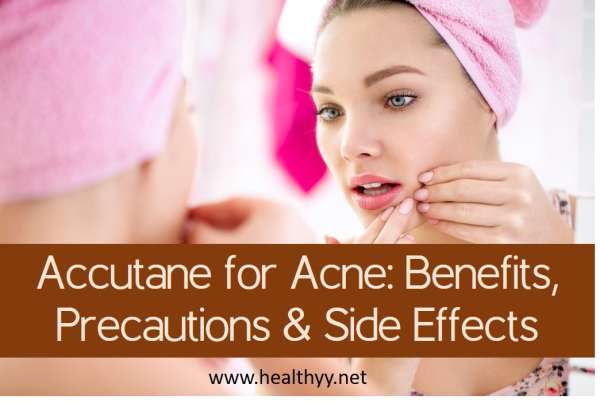 Possible side effects include -

Birth defects: The FDA has prescribed complete avoidance of Accutane while pregnancy. The uterus is exposed because of the molecule’s close resemblance to retinoic acid which is a Vitamin A derivative, which controls normal embryonic development. Its usage during pregnancy causes fetal abnormabilities.

According to a study, almost 42% of infants, born after Accutane exposed pregnancies, suffered from birth defects.

Because of the high risk of miscarriage and deformities, FDA had worked with Roche to create an IPLEDGE risk management program under which the female patients were specially made to pledge to not conceive during their exposure to Accutane and use at least two forms of contraceptives and condoms and went as far as to make them pledge for sexual abstinence as long as they were using Accutane.

Gastrointestinal disorder: Many patients using Accutane developed inflammatory bowel disease which caused inflammation in the digestive tract and ulcer in the large intestine and rectum.

Roche had maintained that it was unaware of this side effect that its product caused, though an animal experiment by them had earlier shown gastrointestinal bleeding in dogs.

In 2009 Roche decided to remove Accutane from the US market after juries had awarded millions of dollars in damages to former Accutane users over inflammatory bowel disease claims.

Psychological impact: Though there is a lack of evidence of the casual relationship between the use of Accutane and depression, a lot of users have shown symptoms nonetheless.

From 1982 to May 2000, the FDA received hundreds of reports linking isotretinoin to depression which included 110 hospitalization for depression or suicidal behavior and 284 cases of non-hospitalized depression.

According to a study, 37 patients committed suicide, 24 while using Accutane and 13 after they ceased using it. 84% of these were males and their age ranged from 13 to 32. Only 8 (22%) of those patients were detected with a history of psychiatric illness.

The doctor must be informed about all prescriptive and non-prescriptive medicines, vitamins and herbal products you are taking and especially those medications for seizure, mental illness, oral steroids, tetracycline antibiotics and vitamin A supplements.

The doctor must be informed about any family history of diabetes, depression, mental illness, asthma or osteoporosis, osteomalacia, anorexia nervosa, heart or liver disease or obesity

Isotretinoin may make the skin sensitive to sun light and hence any exposure to sunlight, sunlamp or tanning must be avoided and in case it cannot be completely avoided you must wear sun screen and protective clothing.

The doctor must immediately be informed in case you experience sudden emotional fits of anxiety, sadness, fatigue, lack of interest in happy activities, lack of energy, concentration difficulties, guilt, masochistic emotions, withdrawal from friends and family or hallucinations. Isotretinoin is known to cause depression and psychosis.

Blood donation must not be undertaken while you are on Accutane and a month after you have stopped the treatment. If this blood is passed on to some pregnant woman, it might harm the unborn baby.

Isotretinoin might hamper your vision, especially in the dark.

Accutane is a vitamin A derivative and in case you are taking both Accutane and vitamin A together, it may increase the severity of your side effect.

When tetracycline antibiotics are taken while on the medication of Accutane, both of them can come together to increase the pressure on the brain.

There is a high risk that birth control pills might not work when on treatment with Accutane
When taken with accutane, Dilantin and corticosteroid medicine might contribute towards weakening your bones

The avoidance of online dispensing of isotretinoin/ Accutane has been suggested by the Food and Drug Association of the United States considering its side effects and the fact that such consumers might display some sense of ignorance on such serious matters.

Almost 80% of consumers using accutane express their satisfaction with this product. In a survey conducted by the Food and Drug Authority, USA, a teenager said that after being scarred for half of her life with acute acne, she had been on accutane for three months and her skin was absolutely clear now.

We reviewed the responses of online consumers who were undergoing treatment under accutane and here is a summary of what they liked and disliked about the product:

Time effective: Quick and time effective impact is one advantage that Accutane has over other forms of medication for treating acne. In some cases, it has shown positive results as early as in 3 months.

Gender neutral: Accutane, unlike oral contraceptives, are not gender specific and has prevented in many men as well as women acne vulgaris

Improves skin texture: Many consumers were satisfied with the impact Accutane had not only on the prevention of acne breakouts but also for the betterment of their skin texture. It tended to make their skin softer and gentler.

Expensive: Accutane is not a very cost effective medication and a few consumers feel that it is too much price to pay when other cheaper options are available in the medicine market

Dryness: Some consumers feel that Accutane causes dryness and flakiness of the skin, lips and eyes as well as skin peeling

Pain: A few consumers while undergoing treatment of Accutane experienced severe pain in the back, legs, neck and joints. This might be caused due to the weakening of bones as a result of Accutane consumption.

Accutane has proved to be one of the most effective treatments for cystic and nodular acne being a quick and easy way out of the problem.

It provides a long term relief though it might re-occur after some years if not too soon. It is very important to sign the iPledge undertaking and follow the guidelines that have been laid down by the US Food and Drug Authority before and while going through this treatment.