Heartburn is a painful burning sensation experienced in the upper chest due to the reflux of acid and other stomach contents into the esophagus.

The reflux is a result of relaxation of the lower oesophageal sphincter or the LES which is in turn triggered by poor diet and lifestyle.

Heartburn is a relatively common disorder which can be treated easily by simple natural or medical remedies but its ignorance can lead to a severe form called gastro-oesophageal reflux disease which is much more complicated in treatment than just acid reflux.

Liquorice is an herb commonly used as a flavouring agent in food and in tobacco. Its roots are used for medicinal purposes such as for the treatment of eczema, bronchitis, liver disorders, and gastrointestinal tract disorders.

It is also used by women with polycystic ovary syndrome to increase fertility and as a shampoo to remove oiliness of the hair.

For the gastric system, it is effective for complaints such as heartburn, colic, indigestion, ulcers, and inflammation [1].

A type of liquorice which is specially made for the treatment of gastric complaints is called deglycyrrhizinated liquorice (DGL). It is made from the liquorice root from which glycyrrhizin has been removed.

Glycyrrhizin is a chief sweet-tasting component of normal liquorice and is believed to cause side effects such as hypertension and edema and its removal is supposed to be effective to avoid such side effects [2].

There are several mechanisms by which liquorice or DGL helps in settling down the symptoms of heartburn and reduce the frequency of reflux of acid in the oesophagus. 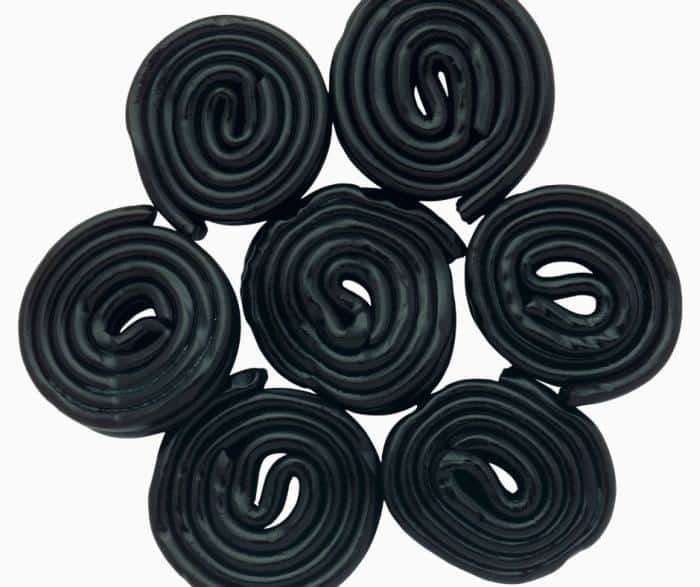 1. Liquorice helps in Reducing the Damage of the Gut Mucosa

The reflux of acid from the stomach to oesophagus and its prolonged exposure causes the protective mucous membrane of the food pipe to get damaged.

This causes ulcers and inflammation, which are the major cause of pain.

A study on the effect of DGL in rats showed that administration of 100-500 mg liquorice per day significantly reduced the mucous layer damage induced by aspirin in the oesophageal and stomach.

This can be considered a potential mechanism by which DGL works to soothe the pain caused by acid reflux and prevents the ulceration of the gut [3].

A number of studies on duodenal, mouth and gastric ulcers have reported that liquorice or DGL helps in reducing the occurrence of the number and size of ulcers induced by different chemicals.

There has been a positive report on the effect of DGL for the mouth and duodenal ulcer whereas some studies on gastric ulcers show that there is no effect on liquorice on ulceration of the stomach.

Nevertheless, liquorice has long been used in the treatment of peptic ulcers and certain clinical trials affirm the protective effects of liquorice against the agents and acids that cause ulcers and pain [4].

Spasms or colic or pain due to contraction of the muscles are of much concern in heartburn. The reflux causes these spasms to increase, increasing the discomfort and the extent of pain in this disorder.

A study on intestinal spasms demonstrated that DGL has potent anti-spasmic effects and the patients given the treatment of caved-s tablets, the commercial preparation of DGL, were free of pain within a short period of time, without any side effects [5].

Dyspepsia or indigestion is one of the major causes of heartburn. Due to poor digestion in the stomach, the food stays there longer, decreasing the pressure of the lower oesophageal sphincter which opens up consequently.

This gives way to the acid to flow up backward and cause heartburn.

In a randomized study, it was found that GutGard, which is commercially marketed liquorice, could reduce the symptoms of dyspepsia within 15 days of administration and treat it completely in some of the patients by 30 days.

It was well tolerated by each group of patients without any side effects and with complete results [6].

In heartburn, the prolonged acid exposure causes damage to the gut wall due to which certain chemicals called cytokines are activated which further activate the immune cells that come to the damage site and cause pain and inflammation.

In a study on the constituents of liquorice, it was shown that two of the components of liquorice extract called glabridin and isoliquiritigenin were potent inhibitors of damage induced nitric oxide and pro-inflammatory cytokines like IL-1 and IL-6.

This anti-inflammatory activity and anti-oxidant activity of liquorice help directly to prevent and heal acid damage induced inflammation in the gut, treating heartburn[7] .

Both liquorice and deglycyrrhizinated liquorice are available in the market under different labels by different manufacturers.

Most common of them, Caved-S and GutGard are available over the counter at the medical stores.

Certain preparations of liquorice also contain other herbs in conjunction with liquorice root powder or extract which can be used for different disorders depending on the constituents.

The dosage of each of the preparation available is usually indicated on the label as the constituents and the amount of composition differs for different manufacturers.

Liquorice root can be taken as an extract, as a tincture or the root can directly be chewed. The extract can be prepared from 1-5g of root taken as an infusion, 3 times daily.

The 1:5 ratio of liquorice tincture in alcohol can be taken by the dose of 2-5 ml, 3 times daily.

The most common dose for heartburn and upset stomach is to take liquorice just as it is or with the combination of other bitter anti-reflux herbs in the quantity of 1 ml, three times a day for four weeks.

All these herbs can be mixed together and their extract can be prepared in form of tea which is made by boiling these herbs in a cup of water for a few minutes.

The tea should be taken by the measure of a cup three times a day for four weeks. Any type of liquorice tea should never be given to an infant or a toddler [9].

Liquorice has been demonstrated to interact with certain drugs and thus should never be taken along with them or at the time when such drugs are being taken regularly.

One such drug is warfarin, which is prescribed in case of blood clotting disorders.

Warfarin slows down the clotting of the blood and the body breaks down warfarin to get rid of it.

Liquorice is believed to enhance this breakdown and thus decrease the efficacy of warfarin. Liquorice has also been shown to interefe with the working of anti cancer drug cisplatin, digoxin, estrogens and furosemide.

To prevent any side effect of liquorice, it is advised to first consult a medical practitioner or a pharmacist before taking un-prescribed doses of liquorice [10].

Though liquorice has been shown to be free of side effects in people who are not on any other medication and free of any kind of allergies, its effects for its usage as a dietary supplement for more than 4 to 6 weeks has been poorly studied, which is why it is advised not to take this herb for more than 4 weeks.

In case of no relief from heartburn within 4 weeks, a doctor should immediately be consulted as it might be a sign of any other disorder or the chronic form of heartburn called gastro oesophageal reflux disease.

It is always good to consult a doctor before taking any herb including liquorice as it might cause any side effect if the person has a disorder other than heartburn, dyspepsia and ulcers, for which liquorice is being used.

For instance, liquorice might show adverse effects in people with hypertension and heart problems and thus such people should avoid taking any kind of liquorice without prescription.

It is also known to cause imbalance of certain hormones like cortisol in the body if taken in large amounts [11].

Liquorice is a very potent herb in ameliorating the symptoms of heartburn and other stomach disorders.

Though liquorice is demonstrated to have fewer or no side effects on people with no other disorder than what liquorice is being used for, it might interfere with the working of other drugs and might cause side effects in heart and liver patients.

Thus to avoid any discomforts, it should always be taken with prescription or even if taken un-prescribed, it should be used carefully.

READ THIS NEXT -
Proton Pump Inhibitors For Heartburn: What & How They Work?
Can Calcium Supplements Help in Heartburn?
10 Signs Indicating That You May Have Heartburn
6 Ways Chewing Gum Can Helps in Heartburn
Eating Small But Frequent Meals Help Prevent Heartburn
5 Reasons Why Slippery Elm Is Great for Heartburn