Heartburn is a painful burning sensation experienced in the chest and upper stomach due to the reflux of acid from the stomach to the oesophagus.

The reflux is triggered by the relaxation of the lower oesophageal sphincter (LES), the function of which is to prevent the backflow of stomach acids.

Heartburn is usually caused by poor diet and lifestyle, however, other reasons might also be responsible for it.

Though it is a common disorder, it negligence can lead to a more chronic form called gastro-oesophageal reflux disease (GERD).

Heartburn can be easily treated using home remedies and over the counter medications. In this article we discuss Dandelion and if it can help in heartburn.

Dandelion is a pesky weed species which is usually very useful for medicinal and edible purposes. It grows in the temperate regions of Europe, North America, and Asia.

Dandelion bears spatula-like leaves and bright yellow flowers that open up in the sun. Its roots are fleshy and filled with white milky fluid which is bitter and slightly smelly.

Its leaves are used to add taste and flavor to salads, its roots are used in some coffee substitutes and flowers to make wine.

It is a rich source of multiple vitamins such as vitamin A, B, C and D and many important minerals such as iron, potassium, and zinc.

The tea made from boiling dandelion flowers in water is used for kidney diseases, swelling, heartburn, skin problems, and upset stomach.

There has been a lack of scientific studies on these uses of dandelion but it has been proven to act as a diuretic drug to get rid of excess fluids from the body and good therapy to stimulate the appetite.

Dandelion flowers have anti-oxidant properties and may increase the efficacy of the immune system upon consumption. 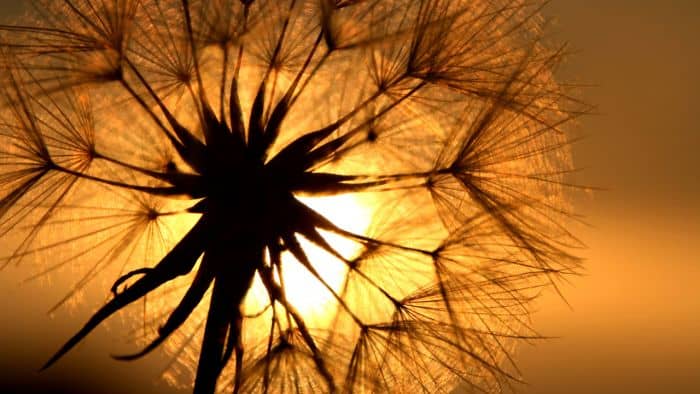 1. Dandelion Helps Balance the pH of the Stomach

Heartburn and all its symptoms arise from one common culprit, the fall in pH due to excessive acidity in the stomach, which damages the gut mucous layer and causes pain.

Dandelion has been found to effectively buffer or balance the pH of the stomach.

Due to lack of research, the major components of dandelion responsible for this buffering action have not yet been identified; however, it is now being included in the commercial herbal medicines and drugs which are used to treat stomach problems, majorly acidity and heartburn.

2. Dandelion Acts as a Probiotic

Probiotics are the substances which help promote the growth of friendly microorganisms in the body.

Natural probiotics include milk curd and other fermented foods such as beer and cheese.

These consumables along with the ones available commercially in the market help stimulate the growth of certain microbes in our stomach that are highly useful for efficient digestion.

In fact, many digestive problems arise due to the lack of a proper number of such microbes which is why the doctor prescribes probiotics to restore digestive health.

Heartburn is one such disorder which is highly affected by indigestion triggered by lack of digestive microorganisms in the body and hence, consuming probiotics help increase digestion and reduce heartburn.

Dandelion has been found to be a good source of certain polysaccharides which act as growth promoters for the friendly microorganisms, thus acting as a probiotic.

Consumption of dandelion increases the growth of microbes and thus digestion, thereby ameliorating the symptoms of heartburn.

3. Anti-inflammatory and anti-oxidative effects of dandelion

Inflammation in the gut mucosa is one of the highly painful symptoms of heartburn.

Excessive acid in the stomach damages the mucosal layer of not only stomach but also oesophagus, which generates certain damage induced compounds called prostaglandins and cytokinins, which in turn activate the immune system in that area and cause pain, ulceration etc.

Another study on dandelion roots and leaves demonstrated the activation and enhancement of NADPH-cytochrome P450 reductase enzyme system in the cells.

A compound called lyophilisate, found more in leaves than roots was responsible for this stimulatory action.

Lyophilisates have a hydrogen donating capacity and with the help of the reductase enzyme, it neutralizes the action of peroxides in the tissue thus reducing the damage and protecting it from oxidation and inflammation.

Indigestion or dyspepsia increases acid production by increasing the retention time of food in the stomach and thus, the chances of heartburn.

Dandelion has been shown to contain a compound called sesquiterpene lactone which imparts a bitter taste to the plant.

This compound is responsible for most of the pro-digestive activities in the stomach and helps increase bile production too.

Dandelion combined with other bitter herbs such as St. John’s wort, lemon balm, celandine, and fennel is shown to have anti-spasmic effects on the gut by increasing the bowel movements and reducing the pain.

Dandelion herbs and roots can be found in a variety of forms such as fresh or dried, tinctures, liquid extracts, teas, tablets, capsules and in combination with other herbs and compounds.

For consumption of dandelion, infusion tea can be made by pouring hot boiling water over 1-2 teaspoonfuls of dried dandelion leaf powder and letting it steep for 10-15 minutes before drinking.

It can be consumed 3 times a day or as directed by the doctor or on the label or as per the symptoms.

Dried root decoction can be made by adding ½-2 teaspoonfuls of dried root powder in boiling water and then straining immediately.

Standardized powder extract for either leaf or root (4:1) can be taken in quantities of 500 mg, 1-3 times daily or as required.

Dandelion medication/tea/tincture, although harmless and side effect free for consumption as food items, should not be given to children below 12 years of age without doctor’s advice.

Even for adults, it is advised to consult a medical practitioner so that a right dose can be determined for effective consumption and immediate relief from symptoms of heartburn and other gut disorders.

Use of herbs for treating common disorders is a time-honored approach.

However, they can cause severe unwanted effects and interact with other drugs/herbs/food items if not consumed under supervision or with care.

Dandelion is usually safe for consumption and doesn’t cause side effects but people with allergies to marigold, daisies, bitter herbs or flowers should avoid dandelion.

In some people, dandelion can cause skin irritation and stomach ache.

People with kidney and gall problems should ask their health provider before consuming dandelion.

Dandelion might interact with certain medications including antacids, diuretics, anticoagulants, and antiplatelets.

It also reacts with lithium used to treat bipolar disorder and ciproflaxin and medications for diabetes.

For diuretics and anti-diabetics, it can increase their effects, causing dehydration and hypoglycemia respectively, which is why a doctor should be considered before taking dandelion along with these medications.

Dandelion is an effective bitter herb used for relieving symptoms of heartburn with minimum side effects and interactions if taken with care.

It relieves stomach ache, inflammation, excessive acid secretion and neutralizes the pH of the stomach.

It is a good choice of natural product, combined with other herbs or individually, used for consumption to keep the gut healthy.

However, people allergic to this herb or on other medications for disorders of kidney, blood, diabetes etc. should consult a doctor before taking dandelion in any form, to avoid unwanted harmful effects.

READ THIS NEXT -
Does Your GERD Needs a Surgery? What Options are Available?
5 Ways Liquorice Can Help in Heartburn
6 Ways Papaya is Helpful in Heartburn
5 Reasons Why Slippery Elm Is Great for Heartburn