Heartburn is a painful burning sensation experienced in the upper stomach and chest due to the reflux of acid from the stomach into the oesophagus.

The reflux is a result of relaxation of the lower oesophageal sphincter or the LES which in turn is triggered by many factors, most common being poor diet and lifestyle.

Heartburn is a common and easily curable disorder, by simple remedies and medications but its negligence can lead to a chronic and more problematic form called gastro oesophageal reflux disease (GERD).

Heartburn, stomach ulcers, and many other gastric disorders are caused by excessive acid secretion in the stomach.

PPIs are medicines that act on the cells of the stomach that produce gastric juices and the acid.

They work on the last step of the pathway of acid production, which is the proton pump and block it so that less or no acid is produced.

The proton pump (H+/K+ ATPase) helps transport protons or hydrogen ions out of the cell, hence causing acidity in the stomach.

The proton pump inhibitors, as the name suggests, inhibit this transport mechanism and help control the overall acid production in the stomach along with the damage caused by hyperacidity.

PPIs are a little slow in action as the medication takes a few minutes to a few hours to show its maximum effect.

Nevertheless, the effect of these classes of drugs is long term and better than that of antacids and histamine type 2 receptor antagonists, both of which are also used to treat heartburn.

Also, PPIs are used to treat frequent heartburns (that occurs 2 or more days a week) as opposed to antacids which can cure only occasional acidities and refluxes.

PPIs are available in the market as tablets, capsules or syrups and both as a prescription drug or an over the counter medication.

PPIs consist of either one six of the proton pump inhibiting compounds which are used in the medications. 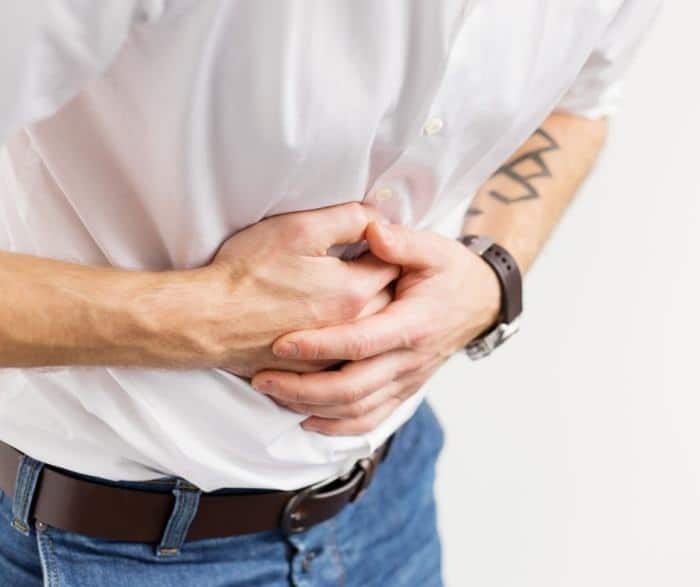 Prescription omeprazole medication comes as delayed release (drug that is released in the intestine to prevent its breakdown in the stomach by acids) capsules or granules to be made into a suspension for consumption.

Over the counter, omeprazole drugs come as delayed-release tablets.

This is to be consumed at least 1 hour before the first meal of the day or as indicated by the doctor or the prescription label.

It is usually to be taken once a day but the dose can be increased up to 2-4 times a day depending on the acid production and only on doctor’s advice.

Over the counter omeprazole is taken once a day for 14 days and the course can be repeated once every 4 months if needed.

Omeprazole delayed-release tablet/capsules are strict to be taken with water without chewing, crushing or breaking.

In case of difficulty in swallowing the drug, it should be mixed (granules from inside the capsule) in applesauce and taken as such with water or as indicated by the doctor.

This mixture of omeprazole tablet/capsule granules and applesauce is not to be stored. Granules of omeprazole to be made into a suspension are also available.

For the preparation of omeprazole liquid, the granules inside the packet should be dissolved in water as indicated in the label and consumed as per directions.

Omeprazole can cause a variety of side effects including nausea, headache, vomiting, gas, and constipation.

Some serious side effects include bloating, seizures, confusion, hives, itching, rashes, swelling in face or throat or any other body part, hoarseness in voice, difficulty in breathing etc. in any of these conditions or in any other unusual situation, a doctor should be consulted immediately.

Overdose of the medication should be avoided and proper care should be taken while consuming it, especially without prescription.

Some of the common medications selling omeprazole are Prilosec by prescription and Zegerid over the counter [3].

Esomeprazole is another PPI medication which is a constituent of many heartburn drug brands.

Like omeprazole, this also comes in delayed-release capsules, granules or tablets, and its dosage and consumption is exactly the same as omeprazole or as indicated by the doctor/drug label.

It can cause a variety of side effects like vomiting, headache, dry mouth, gas and constipation.

Other serious effects include hives, rashes, lightheadedness, blisters and peeling of the skin, difficulty in swallowing and breathing, hoarseness, irregular heart beating, and any other unusual symptom, which should be immediately reported.

It is sold popularly by the brand name of nexium [4].

Like its other counterparts, omeprazole, and esomeprazole, lansoprazole also comes in tablets, capsules and granules, all as delayed release drugs.

Additionally, it is also available as an orally disintegrating tablet which doesn’t need any water or fluids for consumption.

All the instructions for the dosage of lansoprazole medications are just the same as other PPIs or as indicated by the doctor/drug label.

Lansoprazole can cause side effects such as dizziness, constipation, and nausea.

Other significantly serious side effects include blistering, hives, confusion, hoarseness, irregular beating of the heart and any other unusual symptom.

The occurrence of any of such problems should immediately be reported to a medical practitioner.

Lansoprazole is commercially sold by the brand name Prevacid [5].

It is a high power proton pump inhibitor and just like others, it also is sold as a delayed release capsule/tablets/granules.

Without a prescription, it is to be taken once or twice a day before meals for 7 days or as indicated on the label.

Its course should not be exceeded beyond 7 days without a prescription. It also causes common side effects such as dizziness, gas, sore throat, vomiting and constipation.

Some serious side effects are similar to those caused by lansoprazole and other PPIs, in which case, a doctor should be immediately consulted. Rabeprazole is sold commercially with a brand name aciphex [6].

Similar to other PPIs, Pantoprazole is available commercially as delayed-release capsules, tablets, and granules in the concentration of 40mg and 20 mg.

It is to be taken once or twice a day, at least 30 minutes before the meal.

It can cause side effects similar to other proton pump inhibitors and any serious or unusual symptoms except mild constipation, joint pain, nausea, dizziness, gas, and headache should be reported immediately to a doctor.

One of the popular brand names by which pantoprazole is sold is protonix [7].

Dexlansoprazole is sold as delayed-release tablets, Capsules or granules commercially as dexilant.

A little different from other PPIs, dexlansoprazole can be taken with or without food for the treatment of symptoms of heartburn and before meals for prevention of the same.

It causes the same types of common side effects as the other PPIs and any occurrence of unusual symptoms should be reported immediately [8].

It contains omeprazole as its active ingredient. The recommended dose for adults above 18 years of age is 20 mg daily up to 4 weeks.

It is to be taken just before meals to prevent and relieve the symptoms of heartburn.

It is available both as prescription and an OTC drug [9].

It contains esomeprazaole magnesium and is indicated for the short term treatment (4-8 weeks) for healing diagnostically approved GERD in adults and children above 1 years of age.

Nexium is available as capsules of 10, 20 and 40 mg strength for children and adult use and should be taken as prescribed depending on the severity of the symptoms [10].

It contains lansoprazole as its active ingredient. For adults over 18 years of age, it can be taken in doses 1 capsule with a glass of water once every 24 hours for 14 days.

The capsule should never be chewed or crushed and the dose should not be exceeded beyond 14 days if the symptoms are not relieved.

The course can be repeated not more often than every 4 months and children under 18 years of age should never be given this drug without a prescription.

It contains rabeprazole sodium and like nexium, is also indicated for short term administration (4-8 weeks) for healing and symptomatic relief from gastro-oesophageal reflux disease.

For adults over 12 years of age, it can be taken in the dose of 1 capsule (20 mg) with or without a glass of water every 24 hours for 8 weeks. The capsule should never be chewed or crushed.

The course can be repeated for another 8 weeks if the symptoms don’t resolve.

For less severe GERD, the recommended adult oral dose is 1 aciphex 20 mg delayed release tablet to be taken once daily for four weeks [11].

A tablet containing pantoprazole sodium, protonix is indicated in adults and paediatric patients 5 years of age and older for short term treatments (up to 8 weeks) in the healing of acid reflux.

For those adult patients who have not healed after 8 weeks of treatment, an additional 8 week course may be considered but its safety beyond that has not been researched on.

It is indicated for the maintenance of gastro oesophageal reflux disease and reduction in relapse rates of daytime and nighttime heartburn symptoms in adult patients for up to 12 months [12].

It contains dexlansoprazole as its active ingredient and the recommended dose for adults of dexilant is for up to 8 weeks which is indicated for healing all grades of heartburn.

It is indicated to maintain relief from heartburn for up to 6 months. It is to be taken just before meals to prevent and relieve the symptoms of acid reflux or as indicated by the doctor.

Dexilant is available in the capsules of 30 and 60 mg strengths for adult use and should be taken as prescribed depending on the severity of the symptoms [13].

The usual dosage of all types of proton pump inhibitor is once or twice before meals, preferable first meal of the day if taken once in 24 hours.

In any case, directions given by the doctor or provided on the label (in case of OTC drugs) should be strictly followed.

A missed dose should never be compensated with two doses at a time any occurrence of unusual symptoms after consumption of the medication should be reported immediately.

PPIs should never be consumed more than the prescribed or indicated number of days without a doctor’s consent.

The doctor should be clearly made aware of any other medical condition already present such as heart problems, pregnancy, allergies, and blood pressure, etc. to avoid any discomfort [14].

Some of the common side effects of PPIs include vomiting, gas, nausea, headache, and dizziness.

Some serious side effects such as bloating, fever, cough, hoarseness, difficulty in swallowing, unusual heartbeats or any other symptom must be reported without delay.

The course of medication should not be stopped in between even if the symptoms of heartburn are cured, without the doctor’s permission.

Longtime consumption of PPIs has also been shown to have adverse effects on bones, with increased cases of fractures in wrists, joints, spine, and ribs [15].

Proton pump inhibitors are one of the most effective classes of drugs given for heartburn and gastro-oesophageal reflux disease.

Though they show a delayed effect, their outcome is long lasting with more effective relief as compared to H2 blockers and antacids.

It is one of the last resorts given for complicated cases of heartburns.

Though the medication is highly efficient, it is dangerous as well if taken carelessly without prescriptions and proper precautions, and thus, proper measures should be taken while consuming these drugs either with or without doctor’s advice.