Heartburn is a painful burning sensation experienced in the upper chest which, contrary to its name, has nothing to do with the heart.

It is caused due to the reflux of acid and other stomach contents, a condition usually triggered by poor diet and lifestyle.

These factors cause the relaxation of the lower oesophageal sphincter (LES) to relax, giving way for reflux to happen.

The sphincter originally is supposed to guard the stomach entrance and prevent the backflow of stomach contents.

Though heartburn is a common disorder and can be treated easily by simple measures such as home remedies, its ignorance can lead to the development of a chronic form called gastro-oesophageal reflux disease (GERD).

What is Slippery elm?

Slippery elm (Ulmus fulva) is a plant, the bark of which has long been used by Native Americans as an herbal medicine against a cough, cold, urinary tract infections, haemorrhoids, herpes, syphilis, sore throat, wounds and gastric disorders such as ulcers, colic, diarrhoea, heartburn and irritable bowel syndrome 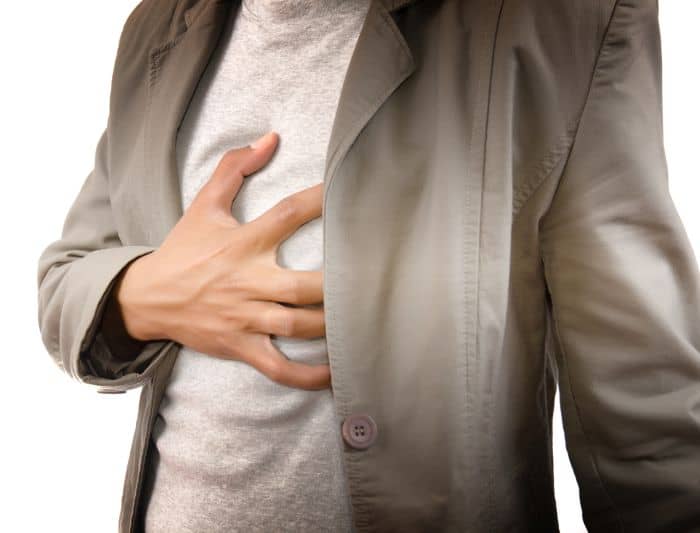 Slippery elm contains mucilage, a substance that becomes a slippery thick gel when mixed with water.

It coats and soothes the internal body parts when taken orally to protect them against damage, ulcerations, and inflammation.

It has certain other medicinal properties which can be the reason behind its healing properties in many diseases including heartburn.

Slippery elm bark is rich in a viscous gel-like substance called mucilage which is made up of several polysaccharides including fructose, rhamnose, galactose, and galacturonic acid.

These polysaccharides are extensively linked with each other through chemical bonds and are highly branched, which give the mucilage, its slippery texture.

The major symptoms of heartburn such as pain, inflammation, and ulceration arise due to the erosion of the stomach mucous layer, causing the gut wall lining to get exposed to the acid, getting extensively damaged.

The bark of slippery elm contains ample amounts of mucilage which resemble in function, with the mucus layer of the stomach.

Regular consumption replenishes the gut with its lost mucus layer and providing it extra protection from the acid that is being refluxed up from the stomach, leading to amelioration of pain and inflammation .

Indigestion is one of the primary causes of heartburn, in which lack of proper breakdown of food leads to the longer retention time of food in the stomach and excessive acid production, making the sphincter vulnerable to relaxation and allowing the acid to flow back up.

In a study on irritable bowel syndrome predominated by constipation and indigestion, an herbal preparation constituting slippery elm was given to the subjects and after consumption of the drug, patients had significant improvement in their bowel movements and indigestion associated bloating.

Results clearly indicated that slippery elm, possibly because of its mucilage, speeds up digestion and can be involved in prevention of several indigestion related gastric disorders including heartburn .

Due to excessive acid exposure of the oesophageal wall, it gets inflamed and the damaged site starts producing reactive oxygen species such as peroxide and superoxide.

These reactive oxygen metabolites attack enzymes and proteins of the cell so much that the cell ultimately dies.

The whole process exacerbates the symptoms of heartburn, by enhancing the pain and damage of the tissue.

Slippery elm has been researched to be found as an abundant source of antioxidants, which cross can react with the reactive oxygen species to neutralize their actions as well as reduce their production.

In a study, slippery elm scavenged the peroxide moieties in the damaged tissue dose-dependently, making itself an effective anti-oxidant.

Heartburn often increases due to limited mucous secretion in the stomach and oesophagus, which erodes easily on the action of acid, leaving the gut lining exposed to the acid.

Slippery elm has been found to not just coat the gut with its own mucilage for protection, but it also stimulates the nerve endings in the stomach to secrete more mucus.

This is helpful because even if slippery elm is taken a few times, its actions remain effective for a long period in the stomach, giving relief from heartburn and its associated pathologies .

Little research has been done on the role of slippery elm in controlling gastric acidity which is a major cause of heartburn.

However, traditional users and several people practicing herbal medicine prescribe slippery elm for the control of gastric acidity which has proven to be effective.

Excessive acid secretion is a major culprit behind heartburn symptoms as it damages mucosal lining, creates ulcers and inflammation, leading to the characteristic pain and burning sensation in the chest.

Regular consumption of slippery elm may reduce the acid secretion apart from exerting other protective effects in the gut, to treat heartburn.

Dosage of slippery elm depends upon the age and health condition of the user.

There are several herbal preparations available in the market that contains slippery elm.

These preparations are available according to a particular disease, for example, an herbal formulation for heartburn may contain slippery elm in higher quantities along with other heartburn relieving compounds such as fennel, celandine and chamomile amongst others.

The doses of these formulations depend on their composition and are marked on the label which should be strictly followed.

If not mentioned, the amount of dose should be first consulted by the practitioner before use.

In general, slippery elm can be taken as such and consumed at home in form of tea or tincture.

For infants and children, its dose depends on the weight and should be consulted with a medical practitioner before administration.

For adults - For adults, slipper elm tea can be taken in quantities of about 1-1.5 cups, three times a day.

The tea is prepared by pouring 2 cups of hot boiling water over the bark, preferably inner bark of slippery elm and letting the contents infuse in the water for a few minutes.

This is also made by taking 2 tablespoons or 4 grams of the bark powder, and mixing it with hot boiling water.

The tincture is slippery elm contents infused in alcohol rather than water. It is available in the market and can be taken in doses of 5 mL three times a day.

Slippery elm lozenges are also available in the market to be taken as directed by the physician of till the symptom lasts.

If any reaction occurs or there is no relief from the symptoms of heartburn, a doctor should be contacted.

Side effects and precautions

Though herbal medicines treat the disease effectively and for a long term; and help in maintaining good health, they can also trigger side effects if not enough precaution is taken regarding their consumption.

They can interact with other medications or exacerbate the effects of another unrelated disease present in the body.

Slippery elm has no serious side effects known but since it coats the gut with its mucilage, it can slow down the absorption of certain drugs.

Thus it should be consumed at least two hours before taking any other drug.

There is a lack of consensus for use of slippery elm during pregnancy.

Scientists believe it is safe to be taken during pregnancy and breastfeeding but certain therapists claim that it can cause miscarriages.

Due to lack of proper scientific evidence, it is best to keep slippery elm away from consumption during such stage.

Slippery elm is one of the best herbal medicines prescribed for heartburn.

It can soothe the stomach by coating it with its own mucilage, stimulates the secretion of mucus, treats ulcers, inflammation and pain and can act as an anti-oxidant.

Besides having less or no side effects, it is also good for maintenance of birth canal, urinary tract and respiratory tract.

Though it is claimed to have no major hazardous interactions in the body, care should always be taken regarding the consumption of herbal medications due to lack of research on the subject and occurrence of any sudden unwanted discomfort.

READ THIS NEXT -
Heartburn / GERD in Infants : Should You be Concerned?
Proton Pump Inhibitors For Heartburn: What & How They Work?
Heartburn and Heart Attack : How They are Different
What are Causes of Heartburn?

Baking Soda for Heartburn Treatment - Any Good?
Benefits of Dandelion in Heartburn
What are Causes of Heartburn?
Can You Take Cayenne Pepper For Heartburn