Heartburn is a painful burning sensation experienced in the chest due to the reflux of acid and other stomach contents into the oesophagus.

The reflux is caused due to the relaxation of the lower oesophageal sphincter (LES) which in turn is triggered usually due to poor diet and lifestyle.

Though heartburn is a common disorder which can easily be treated with simple medications and natural remedies, its negligence can lead to a more severe and problematic ailment called gastro-oesophageal reflux disease (GERD).

Drugs that Promote or Trigger Heartburn

Heartburn is usually caused due to poor diet, obesity, lack of exercise and bad lifestyle, but there may be other factors responsible for the occurrence of its symptoms too.

These include certain diseases or medications taken for some other diseases which are not related to the gut but may have a side effect of relaxing the sphincter muscle or increasing the acid production in the stomach, ultimately causing acid reflux.

A number of classes of drugs are now well known that are likely to cause acid reflux either on a high dose or on the normal dose.

Some of these common classes of drugs including the examples of medications belonging to these classes are given below. 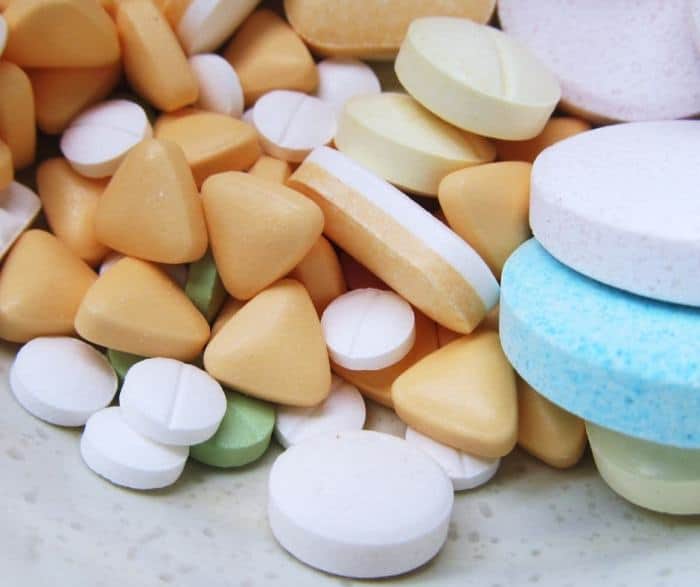 also known as pain relievers, many common analgesics can easily induce relaxation of sphincter muscles causing heartburn because the act on the body’s musculature to cause relaxation and relieve pain.

These drugs are also called non-steroidal anti-inflammatory drugs (NSAIDs) and have been confirmed by research to inflame the gut lining, causing ulcerations and wounds.

Examples of such analgesics include ibuprofen, diclofenac, Naproxen, Piroxicam and aspirin amongst many others.

Marketed as Brufen or Nurofen, Ibuprofen is the major conten of many pain relief medications. It works by relaxing the sphincter muscle and irritating the stomach lining causing heartburn.

It may also increase acid levels that increase the probability of acid refluxes [1].

Aspirin is a well known irritant of the gut lining if taken in large amounts and is confirmed to cause stomach inflammation and ulcers.

These ulcerations and wounds in the stomach are more susceptible to acid causing enhanced symptoms of acidity and reflux.

In fact, high doses of aspirin are used in scientific research to artificially induce ulceration for the purpose of studies.

These are the medicines taken by men and women to prevent and treat osteoporosis. Osteoporosis is a disease where the bones become spongy and brittle and are more susceptible to breakage.

Certain common osteoporosis medications involve Alendronate, Ibandronate, and Risendronate all of which belong to a class of drugs called bisphosponates.

It is a common ingredient of some osteoporosis medications which are taken by women after menopause to prevent and treat osteoporosis.

It is also taken by people who are taking cortecosteroids (a class of drugs which makes bones brittle). Alendronate works by increasing the bone density but has a side effect of causing heartburns.

These can also lead to lesions in the stomach making the heartburn worse [2].

Similar to that of Alandronate, both these drugs also are common medications to treat osteoporosis with a similar mode of action, i.e. increasing bone density and thickness.

They also have a side effect of causing heartburns and stomach lesions, when taken regularly or in high quantities [3].

These drugs block the calcium channels and slow down the rate at which calcium passes into the blood. This relaxes the vessels and dilates them, causing a reduction in blood pressure, for which they are prescribed.

However, a side effect that can’t be prevented by taking these drugs is that they also relax the sphincter muscle, letting the acid seep up into the oesophagus, causing heartburn [4].

It works by dilating the blood vessels and increasing the supply of oxygen to the heart so that it does not have to pump hard.

Regular doseage and overdose of this medication causes symptoms such as headache, chest pains, dizziness and most importantly, heartburn because the drug relaxes the lower oesophageal sphincter, causing the acid to flow up [6].

Another calcium channel blocker, it works in a similar way to Nifedipine and causes heartburn by relaxing the lower oesophageal sphincter muscle if taken regluraly for a long time or in case of overdose [7].

These classes of drugs effectively help in reducing depression and were widely used in the 90’s.

Though they have now mostly been replaced by other classes of anti-depressants, they are still sometimes prescribed by some practitioners.

These drugs increase heartburn by reducing the speed of emptying of the stomach. This causes the food to stay longer in the gut making it to produce more acid, which increases the possibilities of reflux.

Two of the important tricyclic antidepressants are imipramine and amitriptyline.

It is an antidepressant belonging to the class of ticyclic antidepressant drugs. It works by increasing the amount of secretion of certain natural chemicals in the brain which are required for mental balance.

They however also increase the retention time of food in the stomach promoting heartburn [8].

These are taking to relieve anxiety and induce sleep by relaxing the muscles. Unfortunately, they also relax the sphincter muscles, causing heartburn.

Additionally, the patient is supposed to lie down after taking these drugs which exacerbates heartburn because acid reflux is aggravated while lying down.

A common ingredient of many sleeping pills and sedatives, valium is one of the biggest culprits amongst drugs that cause heartburn.

It relaxes the sphincter muscles causing reflux which is aggravated while lying down [9].

They damage the oesophagus and stomach wall, causing ulcerations and inflammation, thus making it more susceptible to acid damage and pain from heartburn.

The odds of reflux can be reduced by taking the medications standing up and not lying down for a few hours until the medication has been effectively absorbed or passed down.

Dopamine is taken for various disorders including Parkinson’s disease and for treatment of low blood pressure caused by heart problems, kidney failure, etc.

This class of drugs aggravates acid reflux by relaxing the sphincter muscle, thus letting the acid flow up and cause heartburn.

While some antibiotics that eradicate the ulcer-causing H.pylori infections are good for the gut and help cure heartburn; antibiotics such as tetracycline used to treat common bacterial infections can cause heartburn by irritating the mucous membranes of the gut.

This makes the lining of the gut more susceptible to acid attacks, causing inflammation, pain, and ulceration [10].

However, not all people taking potassium supplements are susceptible to acid reflux.

Nevertheless, it is safer to take the medication sitting upright with lots of water and avoiding sleep until the drug is washed out.

This class of drugs is used to treat asthma or other lung disorders. It promotes heartburn by lowering the lower oesophageal sphincter pressure which is ideally high to prevent its opening.

Lowering the sphincter pressure relaxes the muscle, opening up the stomach entrance and allowing the acid to reflux up, causing heartburn [11].

A common ingredient of many drugs used to treat menstrual blood flow and reduce menopausal symptoms, progestin and other female hormonal drugs are reported to increase the symptoms of gastro-oesophageal reflux disease/heartburn by either relaxing the sphincter muscle or by modulating the receptors I the gut that causes acid reflux.

Menopausal use of estrogen or over the counter hormonal preparations is scientifically known to increase the risk of heartburn in women [12].

This class of drugs acts on the nerves and blocks the release and actions of the neurotransmitter acetylcholine.

It is usually used as a medication to control spasms, sea sickness, etc. however, it also additionally acts upon the stomach, relaxing the sphincter muscle, causing heartburn.

The risk is more in older patients and people who take anticholinergics after heavy meals and lie down immediately [13].

Drugs containing nitrates are used to relax the heart muscles and control angina. They are also used in heart attacks but unfortunately, they have a side effect of relaxing other muscles besides the ones involved in heart function.

One of these is the sphincter muscle which may get relaxed on the consumption of medications containing nitrates, causing acid reflux and thus, heartburn [14].

Also known as alpha-adrenergic antagonists, these drugs are used to treat hypertension, relax the blood vessels and cure some prostate conditions.

They act by binding to the adrenergic receptors in the brain and body but also relax the sphincter muscle in the gut.

This allows the acid to seep up and cause heartburn, a side effect of these drugs. Some examples of alpha-blockers include Doxazosin and Prazosin [15].

Though heartburn is mostly said to arise from spicy and fatty food, alcoholism, smoking, having a poor diet, obesity, bad lifestyle and many such daily practices, it may also arise due to certain diseases or drugs taken to cure some unrelated disorders.

Many drugs are known to interfere with the sphincter function and causing reflux, mostly by either relaxing the sphincter or by irritating the gut lining.

In such cases, it is advisable to keep a check on the drugs being taken and ask the doctor for suitable replacements that are less susceptible to cause acid reflux or aggravate heartburn.