Heartburn is a painful burning sensation experienced in the chest or upper stomach due to the reflux of stomach acid into the oesophagus.

The reflux is a result of relaxation of the lower oesophageal sphincter (LES) muscle that is under normal conditions, supposed to stay tight and prevent acid up-flow.

The relaxation of LES, in turn, is usually caused due to poor diet, unhealthy lifestyle, smoking, alcoholism, and several other pathophysiological factors.

Though heartburn is a common condition and can be treated easily with simple medications, its negligence can lead to a more chronic ailment called gastro-oesophageal reflux disease (GERD).

While millions commonly experience heartburn at least once in their adulthood, very few know about the actual triggers of the same.

Heartburn has many common triggers that start off that burning sensation characteristic of the disorder.

The triggers of heartburn may vary from person to person so it is important to keep a track of food items that seem to give way to acid reflux.

It’s not just the food but also lifestyle changes and the types of exercises that tend to start the discomfort.

However, there are certain well known common triggers of this disorder that are experienced to cause heartburn in most people.

These are explained in detail below. 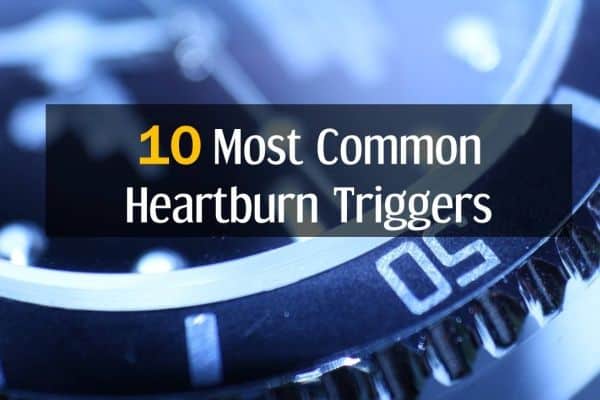 Heartburn most commonly occurs after eating a large and fatty meal. The effect of this doubles if the meal I consumed at night just before sleeping.

Heavy and fatty meals are very hard to digest.

Such type of food pressurizes the stomach, increases the acid production and relaxes the lower oesophageal sphincter muscle.

Indigestion also causes the food to be retained in the stomach for a longer time.

All these factors become worse at night time or just before lying down because it is even harder for the gut to digest food while the body is in a relaxation mode. Lying down should be avoided for at least 2 hours after eating.

How to avoid: for people with frequent heartburns or those who have tracked down their triggers to heavy and fatty meals, it is important that they should avoid fatty food or consuming food in very large quantities at a time.

Eating smaller and frequent meals help a lot in reducing heartburn as it doesn’t pressurize the stomach to digest all the food at once. Also, it is important to note that fatty and heavy meals should be avoided before sleep at all costs.

A minimum of 2-hour gap should be kept between eating and lying down.

2. Exercises of the lower abdomen and headstands

heartburn can also be triggered by a certain type of exercises. These include abs work, crunches, sit-ups, leg lifts or any kind of workout positions that put pressure on the abdomen.

Exercises that pressurize abdomen can alter the lower oesophageal sphincter pressure and cause it to open up, causing heartburn.

Also, headstands and certain yoga postures that include inversion of the body can also show this effect.

This is because headstands, downward dog and other body inversion postures reverse the flow of stomach contents, leading to heartburn.

Though exercise is a less common trigger for heartburn in healthy people, it can certainly cause havoc for the ones who suffer from heartburn frequently.

How to avoid: heartburn is no excuse to avoid exercises. In fact, exercise helps keep weight under control because obesity is another big factor that leads to heartburn.

For people who suffer from heartburn after abdominal exercises or headstands, it is important that they should avoid such postures and use some other forms of exercises that do not focus on the abdominal areas but the other parts of the body.

It is also important to note that exercising on a full stomach or working out shortly after meals is also a bad idea.

If proper precautions are taken and under supervision, exercise can be removed from the list of things that trigger acid reflux.

there are many types of food items that are commonly known to trigger heartburn and acidity. Apart from fatty foods, spicy food items and those with higher acid content can start off acid reflux.

Fruits and vegetables that have high acid contents such as citruses increase the amount of total acid in the stomach. Conversely, such food items decrease the pH of the gut and make it more acidic.

How to avoid: eating a large number of citrus fruits, tomatoes, and curry products, foods that contain a lot of spices, onions, and garlic is a strict no-no. Small amounts of such items can be taken if the person does not suffer from severe acid reflux but large meals containing these items should be avoided.

Alcohol is a well-known trigger for acid reflux.

It relaxes the lower oesophageal sphincter muscle and irritates the gut causing heartburn or making its symptoms worse.

Of all the alcoholic drinks, wine is the biggest culprits behind triggering acid reflux.

How to avoid: it is important that people with heartburn should avoid alcohol as much as possible, especially with meals.

Heavy meals along with alcohol increase the distress caused on the stomach and leads to heartburn.

Caffeinated drinks just like alcohol, relax the muscles of the body, including the lower oesophageal sphincter muscle.

Coffee and other caffeinated products should be steered clear of if the person is suffering from frequent heartburn.

How to avoid: the dosage and amount of caffeine consumed throughout the day should be kept under control. Another option can be to drink decaffeinated coffee.

For people who suffer from frequent heartburn, caffeine can worsen the condition which is why it is advisable to fully avoid caffeinated drinks.

Smoking not only affects the lungs but also other parts of the body.

Research has shown that smoking causes the pressure on the sphincter muscle to drop, causing it to relax and lead to acid reflux.

How to avoid: smoking is strictly prohibited to avoid any acid reflux. It has been shown to cause heartburn more commonly than other triggers such as food, exercise, and alcohol.

Just like alcohol, caffeine, and cigarettes, chocolate also relaxes the muscles of the body, especially the sphincter muscle.

It also decreases the pressure on the lower oesophageal sphincter, that lets the acid to creep up.

How to avoid: for people who suffer from frequent heartburn, chocolate consumption may not be the best idea.

For such people, chocolate may trigger or worsen the effects of acid reflux which is why they should stay away from it.

Soda and carbonated drinks relax the oesophageal muscles and damage the gut wall.

Several studies suggest that the gas from the carbonated drink exacerbate heartburn and trigger acid reflux.

How to avoid: it is best when people who already suffer from heartburn avoid any kind of carbonated drinks or sodas because it has been shown to adversely affect the sphincter muscle and cause reflux.

Pain relievers such as aspirin and NSAIDs (Non steroidal anti inflammatory drugs) irritate the gut and cause heartburn.

Sedatives and anti tricyclic depressant drugs also show the same relaxing effect on the LES. The medications used in chemotherapy and some osteoporosis drugs damage the lining of the gut.

Hormones such as progesterone (found in birth control pills) alter the pressure on the sphincter muscle.

How to avoid: many people taking the above-mentioned drugs in large quantities or for a longer time are bound to experience heartburn.

In such cases, it is best advised to contact the doctor and ask for alternatives or certain medications that can neutralize the effects of the drugs triggering heartburn.

yet another common cause of heartburn, pregnancy creates complications in the stomach that triggers acid reflux frequently.

The growing size of the uterus exerts excessive pressure on the stomach that causes the relaxation of the lower oesophageal sphincter.

Also, during pregnancy, hormonal levels in the body shoot up that also affects the sphincter physiology, causing it to relax and give way to the acid to flow up.

How to avoid in pregnancy: during pregnancy, it is important to have a healthy diet and avoid common food triggers of heartburn such as spices, onions, chocolate, caffeine, alcohol, and smoking. Elevating the bed at the head side also helps prevent acid reflux.

Exercising and certain lifestyle modifications during pregnancy such as avoiding sleep immediately after eating can also prevent heartburn. In case of severe discomfort, heartburn medications can be taken after consulting with the doctor .

Heartburn is a very common condition and can be triggered by several factors.

These triggers may vary from person to person on the basis of their likeliness to cause acid reflux, but they sure are the most common trigger of heartburn.

These above-mentioned triggers depend on different conditions and lifestyles of different people and thus, proper precautionary measures should be taken to keep these triggers under control or to avoid certain triggers to steer clear of the discomfort caused by heartburn.

READ THIS NEXT -
13 Foods / Drinks That Can Trigger Heartburn
Popular Over the Counter (OTC) Drugs For Heartburn Treatment
5 Ways Ginger Can Help You in Heartburn [Science Backed]
Can Cinnamon Really Help in Heartburn?