Heartburn is a common physiological condition where the patient suffers from painful burning sensation in the chest area, usually due to indigestion and reflux of acid in the oesophagus.

This reflux is caused by relaxation of the lower oesophageal sphincter muscle, which is supposed to guard the stomach entry and prevent the backflow of stomach contents.

The severe form of heartburn, GERD can happen if heartburn is left untreated.

Heartburn is mainly caused due to poor diet and lifestyle and can be treated by changing dietary habits easily. There are several home remedies which can help in heartburn. Let's find out if milk can help and how to use it.

Milk is a highly debated beverage to be ingested during heartburn.

Several types and sources of milk have different effects on acid reflux.

While some types of milk can increase acid production and hence reflux, others might actually reduce the effect of acid and ameliorate heartburns.

The key here is the fact that any kind of fat ingestion increases heartburn and so does milk because it contains fat.

However, milk proteins are known to soothe the gastrointestinal tract which is good in the treatment of heartburn, so it creates a paradox about whether or not, milk treats regurgitation.

Let us discuss various film types and how they affect heartburn situation.

Consumption of milk initially might seem to provide relief from the burning sensation, characteristic of heartburn, but after some time, it increases the acid production and increases heartburn.

This is said in case of full-fat milk where milk proteins indeed soothe the gut walls but increased fat content in the milk invites high acid secretion for its digestion, which increases acid reflux.

Several types of research on infants and adults have revealed that low-fat milk or skimmed milk is best to soothe heartburn because it retains the capacity to mollify the gut while not causing increased acid production as it has little fat content.

Low-fat milk takes less time to get digested in the stomach, increasing the gastric emptying rate at the same time.

This increased digestion prevents the stomach to produce more acid or change the pressure of the LES, preventing heartburn. 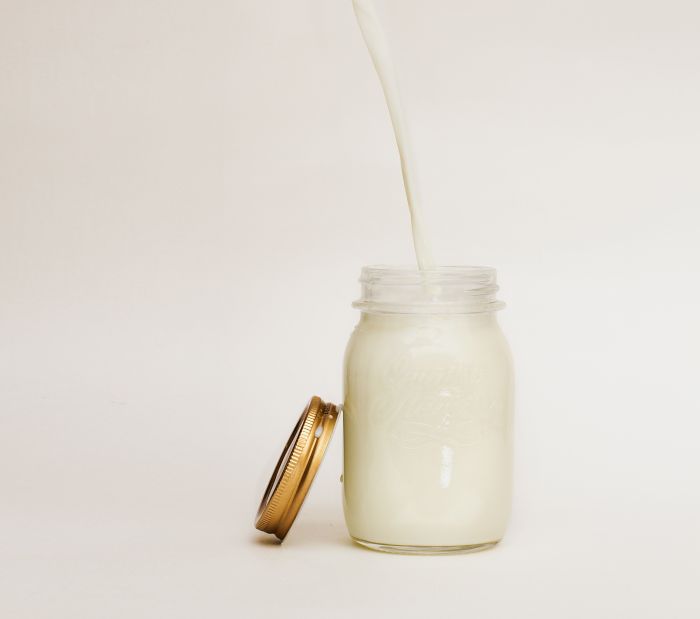 There are a few reports as to how milk placates the gastrointestinal tract and eases heartburn.

Comparisons between whole fat milk and non-fat milk revealed that fatty milk significantly decreased the LES pressure, allowing it to open and cause reflux of acid.

In contrast, low fat milk worked to increase the pressure of the LES, make it close more tightly and prevent acid reflux, clearly indicating that milk does provide relief from heartburn, provided it is non-fat or low fat.

This is predominantly produced for the individuals who are lactose intolerance.

However, a study has shown that this milk not only benefits those who cannot digest lactose, but also to those who have constant gut problems but love milk.

Heartburn and GERD is a common but serious problem in infants, especially the ones who do not receive mother’s milk at all or in low amounts.

It has been found that human milk contains certain factors which are anti-inflammatory for the gastrointestinal tract and thus reduce the painful burning sensation and the damage caused by heartburn.

Also, the fat and lactose content in that milk is optimal so as to provide appropriate nutrition to the infant, not causing digestive problems at the same time.

It has also been shown that those infants who receive cow’s milk more than human milk are more prone to suffer from heartburns than the ones on a constant human milk diet.

Research has shown that caprine (or goat) milk is high in beneficial protein content and is digested a lot faster than bovine (of cow or buffalo) milk.

In the same research, it was also shown that raw milk is digested faster than heated milk because heat tends to precipitate the fat out, making it insoluble and more difficult to digest.

Also, goat’s milk has a higher amount of the protein casein which is important for growth and healing of tissues, which can be correlated with its capacity to heal the gut wall, damaged with acid reflux.

Thus, for treating heartburn with milk, goat’s milk should be definitely of choice rather than normal bovine milk.

How to take Milk for Heartburn

Only low fat or non-fat skimmed milk should be consumed by heartburn patients. For adults, goat’s milk works the best to heal and pacify the gut, making it healthier. For infants, best milk is mother’s milk.

It is usually advised that milk should be taken raw or cold rather than boiled, heated or hot.

This makes it less digestible and also precipitates out essential proteins which could help ease out the inflammation and pain caused due to heartburn.

Another important fact to keep in mind is that milk exacerbates postprandial or nighttime heartburn.

It has been demonstrated that cow’s milk causes more deleterious effects on GERD if the patient consumes milk just before sleeping as compared to daytime consumption of the same.

This applies to all other types of milk just as well.

Even if the milk is low fat or skimmed, it takes a considerable amount of time to degrade it and GERD patients are strictly not advised to eat any kind of food item at night which can be hard to digest.

This can cause regurgitation and night time severe GERD.

Milk is in general considered good for health for every individual in normal healthy conditions but for GERD patients, whole fat, cow’s milk can be a source of severe problems.

There are no special precautions as such of milk for GERD patients except to avoid fatty milk overall and any kind of milk at night time.

Possible side effects of milk could be due to allergic reactions to its protein contents but that is very rare.

Milk is considered good to heal GERD and heartburn because it has a high level of proteins which can have anti-inflammatory effects on the gut wall against the action of acids.

But all these properties are only of use if the milk consumed is low fat, skimmed, cold and caprine.

High fat or heated milk worsen heartburn and should be avoided to avoid further complications involved in acid refluxes.

READ THIS NEXT -
Electroacupuncture for Heartburn - Does it Help?
Eating Small But Frequent Meals Help Prevent Heartburn
Vitamin B Benefits in Heartburn
5 Ways Liquorice Can Help in Heartburn