Heartburn or a chronic form, gastro-oesophageal reflux disease, is a physiological condition where the acid and other contents of the stomach reflux back in the oesophagus, to cause a painful burning sensation.

Contrary to its name, it has nothing to do with the heart and is caused because of the lower oesophageal sphincter or LES muscle, which guards and prevents this reflux, malfunctions.

This malfunctioning is usually a result of poor diet, poor lifestyle, and obesity.

How Chewing Gum Helps in Heartburn

If the food is properly digested and assimilated, the chances of heartburn become minimal.

However, the clinical relevance of chewing gum for heartburn had been unchecked until recently, when the clinical trials and studies conducted experiments to prove that chewing gum was good for treating acid refluxes.

Consequent to these studies, which gave a green signal to the beneficial use of chewing gum to cure refluxes, pharmaceutical companies started designing gums containing antacids, which were more efficient in treating heartburn as they stimulated salivary secretion and neutralized stomach pH via antacids at the same time.

Given below are some of the ways how chewing gums treat heartburn. 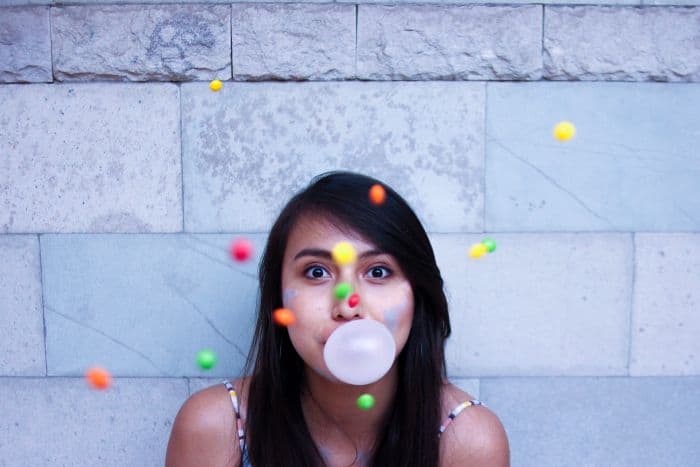 This means that the activity of the salivary glands increases along with the secretion of saliva.

This stimulation elicited by taste and mastication leads to an increase in pH, buffering power, super-saturation of saliva and better digestion of food due to efficient chewing habit induced by regular chewing of gums.

Improved digestibility overall, leads to a reduction in the episodes of GERD or heartburns.

Sugar-free chewing gums, as proven by clinical trials shorten the time period of the emptying of the stomach.

This is a benefit to treat heartburn because, higher the level of indigestible contents in the food, longer the food stays in the stomach.

And if the food stays there for long, the acid secretion would be high and there would be very high chances that this acid refluxes back in the oesophagus.

As gums improve digestion, the food tends to be broken down faster by the acids and results in earlier emptying of the stomach, lowering the chances of heartburn.

3. Increase in the time of exposure

The effectiveness of medication depends not just on its chemical/physical nature, but also the time of exposure.

Since a gum can be chewed on for a longer time, there would be a slower constant release of high pH saliva, swallowed and pushed down in the stomach for a long time, which makes gums even more effective.

This works even better with the gums containing antacids such as bicarbonate which is constantly released in the stomach for a considerable period to cure heartburn, or even its chronic form, gastro-oesophageal reflux disease

After the establishment of the fact that chewing gums indeed reduce gastric disorders by increasing digestion and pH, several pharmaceutical companies started developing sugar-free gums coated with antacids or medications for heartburns such as coatings or tableted centers of acid blockers and proton pump inhibitors.

These chewing gums serve a dual purpose of increasing the digestion and curing heartburn effectively as just chewing gum can take some time to reduce the symptoms of acid refluxes.

5. Forcing Fluids down the gut

In a study conducted in 2005, it was demonstrated that chewing gums induce frequent swallowing, thus forcing the fluids down the gut.

This helps create a pressure on the sphincter to inhibit its relaxation and thus opening to give way to acid to come up.

Also, since the fluids are forced down, the contents of the stomach are also digested properly and pushed down towards the intestine instead of flowing back up.

Since gum makes the salivary fluids more alkaline, when it goes in the stomach, it neutralizes the acids to reduce its burning effects which are the primary symptom of heartburn.

Chewing Gums for Heartburns – How and When?

In general, it is advised to eat a chewing gum 30 minutes after a meal every day.

It helps to digest the food and prevents acid refluxes.

In case of episodic heartburns, commercially available antacid coated gums can be taken to treat the ailment.

In such cases also, the gum can be taken after meals to reduce the up flow of acids and thus reduce the risk factor of getting heartburns.

It has been shown that peppermint and spearmint relax the sphincter muscle and allows the acid to flow up.

Thus gums with peppermint or spearmint should be avoided. Rather, different other flavors such as cinnamon can be tried as it reduces the risk of sphincter relaxation.

Also, most chewing gums contain sugar which does not cause any changes in the pH of the saliva as does the sugar-free gum.

Thus sugar-containing gum not only causes dental caries but does not effectively relieve the risk of heartburns. So it is highly advised to take sugar-free gums only.

Many sugar substitutes have been added to the gums such as sorbitol and xylitol which enhance the taste of the gum without causing dental plaques.

Such gums also so not interfere with an increase in pH of the saliva and are thus a good substitute for sugar-free gums.

The gums containing bicarbonate can be taken 2 sticks 4 times a day, for maximum effectiveness.

The bicarbonate containing gum has been shown to increase the oesophageal pH more than the ordinary sugar-free gum and works better in case of chronic gastro-oesophageal reflux disease .

Side effects and Precautions

As stated earlier, gums to be chewed regularly shouldn’t be containing sugar.

This sugar is fermented by the bacteria in the mouth to cause dental caries and also doesn’t really help much in heartburns.

Instead, the gums with sugar substitutes or sugar-free gums should be used daily. In addition, the sorbitol-containing gums are less efficient than xylitol containing gums.

There might be a slight risk of dental erosion in these gums so overall; sugar-free gums are the best pick.

There are no other reported side effects of chewing gum for heartburn, but precautions should be taken with coated gums as an excess of bicarbonate coating can be harmful too. So it should be consumed in limits.

Chewing gums have multiple beneficial effects on the digestion and on dental health.

It is a good practice to chew gums after meals to reduce episodic heartburns and in case of treatments that are required for acid refluxes, antacid coated gums work wonders.

However, sugar-free or substituted sugar-containing gums can only be used to avoid any side effects of the daily use of gum on the body.

Overall, chewing gum can be a boon for heartburn and chronic GERD treatment, with slow but efficient effect.