Heartburn is a painful burning sensation in the chest due to reflux of acid and other stomach contents in the oesophagus.

The reflux occurs due to relaxation of sphincter muscle or the lower oesophageal sphincter (LES), which is strongly affected by diet, weight, sphincter pressure, sleeping, and sitting positions, and other lifestyle changes.

Though heartburn is a common problem of the digestive tract, its ignorance can lead to a severe condition called gastro oesophageal reflux disease (GERD).

Why Meditation is Great for Heartburn 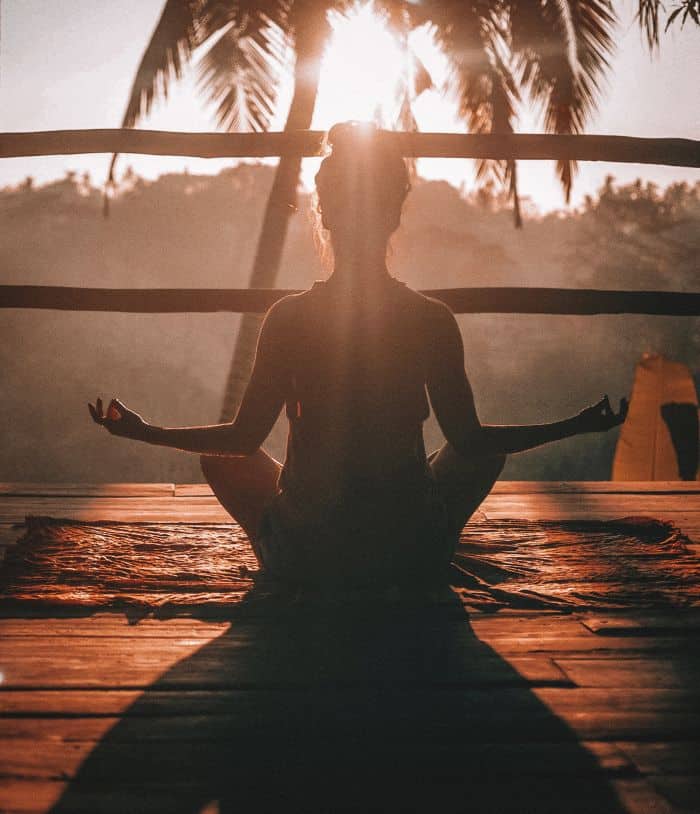 Apart from common natural and allopathic remedies for heartburn, certain other complementary health approaches are also available to prevent and reduce heartburn naturally.

One of the most popular and effective of such approaches is yoga and meditation.

Yoga is a physical, mental and spiritual practice that aims to transform the body and mind.

Meditation is a component of the spiritual section of yoga, which links the mind with the body with the aim of progressive relaxation and the promotion of health.

Meditation of the mind and body practice has a long history of curing illnesses, improving psychological balance, increasing overall health and ensuring well being.

There are many types of meditation, but most of them involve a few common factors such as practicing in a calm and serene environment, a quiet location with less or no distractions, a specific comfortable posture, a focus of attention and the openness of the mind to accept the distractions and let them go without judging them.

A number of studies and trials have worked on the effect of regular meditation on the change in the occurrence of the symptoms of common diseases.

It has been found that the people who practice meditation daily have a lesser overall chance of developing common non-communicable diseases and lifestyle discomforts such as dyspepsia or indigestion, constipation, sleep disorders, depression, blood pressure, diabetes, heartburn, irritable bowel disease and other autoimmune diseases like rheumatoid arthritis among many others.(1,2,3,4,5,6,7,8,9)

The people who start meditation regularly after the occurrence of the disease are likely to recover faster and for good as compared to those who rely on drugs and medications.

The effect of meditation and yoga on heartburn is positively effective and largely unexplained by science.

However, certain indirect links, conclusions, and studies help hypothesize the fact that meditation and breathing exercise reduce stress levels and help the brain get better control over the body to reduce discomforts.

In certain cases of GERD, where the last resort of medications such as proton pump inhibitors fails, mind-body exercise has proven to be a medication of rescue.

It manages to ameliorate transient LES relaxations, the frequency of reflux events and reduce the cross-sectional opening of oesophagogastric junctions.

1. Meditation ensures the psychological well being

Stress is one of the major factors governing the frequency and occurrence of the symptoms of heartburn.

It has been shown to exacerbate the inflammatory responses in the gastrointestinal system apart from causing vital exhaustion, oesophageal acid exposure, relaxation of sphincter muscle and increased food retention time in the stomach due to poor digestion.

All these factors are the effectors and promoters of heartburn and GERD .

Meditation employs a variety of techniques to afflict the mind’s capacity to control the bodily functions and one of those is by the reduction in stress.

There is no known mechanism of action of meditation on the brain except that it fills in a positive energy and relaxes the mind so that it can focus on other important things such as body and health .

Certain postures of yoga such as kapalbhati and agnisar kriya, along with other meditative breathing exercises can help tone the diaphragm.

This is particularly useful in addressing GERD because it decreases the flow of acid from the stomach back into the oesophagus, the main culprit behind heartburn.

This also increases the LES tone and reduces its period of relaxation, maintaining it tight and closed to avoid any acid refluxes .

Meditation and yogic breathing exercise help in alleviating GERD by impacting the autonomous nervous system which limits the ability of the gastro intestinal tract to continue peristaltic movements (snake like contractions which help push food down the gut) and prevents appropriate fluid and secretion shifts needed for digestion.

During mind body exercise, a relaxation response is initiated which control the autonomic nervous system, which in turn reduces the response for secretion of epinephrine.

Reduction in the levels of epinephrine lowers heart rate, blood pressure, respiratory rate and other stress responses which directly influence the gastro intestinal tract functioning by impairing digestion and peristalsis .

Ancient Hindu medicine has listed out some conditions which cause digestive tract disorders.

These causes vary according to the underlying imbalances in the system.

Heartburn and indigestion arise due to Pitta imbalance and can be resolved by reducing the Pitta .

This can be done by specific meditation exercises and body posture enhancing exercises which involve prone back bends, twists, deep forward bends and standing postures while controlling the breathing .

The most important breathing exercises in yoga and meditation are called Pranayam.

Kapalbhati and agnisar kriya as indicated above are useful for treating heartburn and refractory GERD. Kapalbhati is one of the 10 types of pranayama exercises, in which inspiration is passive and expiration is active and aggressive.

This helps in clearing up the respiratory passage and strengthening the diaphragm. Agnisar kriya is a method of flapping or contracting the abdominal muscles in and out, in order to promote increased digestion and gastrointestinal health.

In the art of meditation, it is believed that heartburn, indigestion and GERD is indicative of swallowing bitter emotions like anger or having aggressive feelings rising up from within .

The best way to meditate is to first set aside a time which is dedicated just for medication and doesn’t involve any distractions.

Choosing an environment which is natural, fresh and ventilated such as a garden or in the woods would be a plus.

This is followed by choosing a comfortable position, closing the eyes and breathing slowly.

Guided meditation is a type of medication where another person guides the imagination of the patient by focussing on various themes which would improve the patient’s condition.

In this case of heartburn, focussing on themes like forgiveness, calmness, acceptance, releasing anger and soothing mind would be beneficial .

Most Beneficial Yoga Postures for Heartburn

The most beneficial postures of yogic meditation for the reduction in heartburn and GERD are the seated twist, the cat pose, the dog pose, the wind relieving pose, belly breathing, supine twist, child’s pose and knee to chest pose.

These poses may have a different notation based on the source.

The seated twist involves sitting on the floor comfortably with legs crossed.

This is followed by turning the torso to the left, placing the right hand on the left knee for leverage.

The left palm is placed on the floor near the tail bone with head turned towards the back to look at the shoulder.

This is held for at least 5 slow inhales and exhales and the side is changed to the right.

Here is a video for reference -

The cat and dog poses are meant to strengthen the back and rejuvenate the body and the gastro intestinal system by controlled breathing.

They are done by first lying down on the stomach and then raining the body up in a position such that the eight is resting on both knees and the two palms, just like a cat or a dog would stand.

The only difference between the two poses is that the cat pose involves head down with back curved outwards and the dog pose involves the head pose up with the back bending downwards.

Here is the video with both poses

The wind relieving pose is done by lying on the back and pulling one knee up close to the stomach and breathing in a controlled manner.

This is repeated for the other knee and the whole process is repeated several times for a prescribed amount of time.

This helps release excess gas trapped in the digestive tract and improved the digestion.

Here is a quick video

The supine twist is similar except that it involves both the knees close to stomach while lying on the back, with both arms extended out in a T position.

This is followed by controlled breathing exercises.

Here is quick video to demonstrate the pose -

The belly breathing is done after meals for improved digestion and relaxation.

It involves lying on the back and putting one hand on the navel and the other on the chest and carefully observing the controlled breathing pattern which calms down the nerves and helps in releasing more digestive enzymes for a better gut performance .

Here is a quick video for you -

Precautions and Possible Side Effects

Meditation and yoga is generally considered safe for healthy people, however, the presence of any disease can call for an expert advice and prescription because specific exercises can have a specific effect on certain diseases, which can also be harmful if performed without proper guidance or knowledge.

There have been rarely any reports of exacerbations of the symptoms of a disease by people who perform yoga and meditation regularly and with proper regulations.

Thus, it is advised for an amateur to first consult a recognized practitioner for proper information and instructions on how to perform yoga and meditation correctly as it might prove deleterious if improperly performed.

Meditation and yoga are both mind body practices which formulate a novel area of complementary medicine.

They are slowly gaining wide acceptance because of its healing efficiency, no side effects and power to maintain health.

In heartburn, it directly acts on reducing the stress levels and improving the control of brain on the body so that the gut muscles are strengthened and digestion is improved.

However, it is important to follow all the instruction and rules of this exercise to avoid any discomforts, for which it is best to practice it under the supervision of an expert.

READ THIS NEXT -
How Heartburn Can Impact Your Health
Can Milk Really Help in Heartburn?
What are Causes of Heartburn?
How is GERD Diagnosed?