Heartburn is a painful burning sensation in the chest due to the reflux of stomach contents especially the acid in the oesophagus.

This reflux occurs because the lower oesophageal sphincter muscle is relaxed.

Several conditions such as poor diet, lack of exercise and fatty foods can cause the relaxation of the LES, however, there might be other pathological conditions too which contribute to heartburn.

Acid reflux is a relatively common phenomenon but ignorance and lack of proper treatment can lead to its severe form known as gastro-oesophageal reflux disease or GERD.

Fortunately, heartburn can be controlled when at initial stages with simple lifestyle changes, diet, and home remedies.

In this article, we discuss the use of Red Rice yeast for treating heartburn.

Red rice yeast is a traditional Chinese supplement used both as food and medicine. It is made by fermenting a type of yeast Monascus purpureus over red rice.

It has been used for several centuries as a food coloring agent, as a digestive aid, for treating hypertension and for improving blood circulation.

It is an alternative therapy for treating high blood cholesterol because it contains compounds called statins which resemble the allopathic medication chemical, levostatin, used to treat hypercholesterolemia.

For a historical perspective, Angkak was found to possess many pharmacological benefits as well.

Published in the Ming dynasty, it is described with a medical function for the treatment of diarrhoea, hangovers, bruised muscles, indigestion and colic dyspepsia in children .

Red rice yeast contains a number of beneficial compounds such as fatty acids, sterols, B-complex vitamins and monacolins with other anti-oxidants.

All these compounds are known to exert beneficial effects on the digestion, blood circulation and other parts of the body .

More than that, red rice yeast is a fermented form of normal rice which acts to improve digestion of food by acting as a probiotic, just like other fermented foods such as yogurt, beer, and cheese.

Below described are some of the beneficial effects of red rice yeast for heartburn treatment in detail. 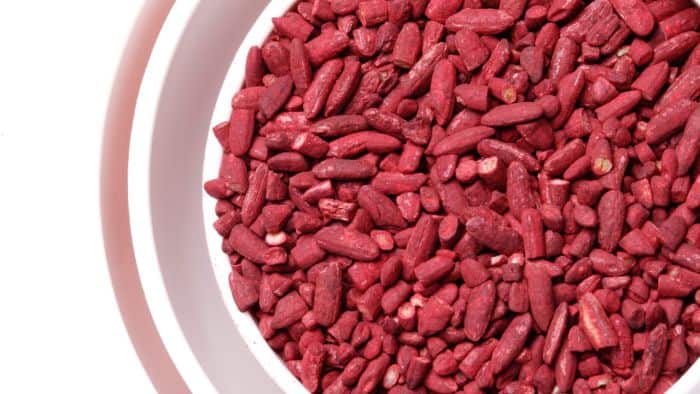 When fermented with rice to produce red rice yeast, the fungus Monascus produces a yellow pigment identified to be Monascin which has potent anti-inflammatory properties.

This pigment was shown to reduce the gut inflammation in mice.

This property of the yellow pigment is responsible to reduce the inflammation caused by hydrochloric acid from the stomach in other parts of the gut such as oesophagus, the main reason for heartburn.

Monascus while fermentation produces a compound called dimerumic acid which is shown to have antioxidant properties.

When the food is digested, several free radicals are generated which cause damage to the cells or the cells lose their efficacy.

In the case of heartburns caused by high fatty food consumption, obesity and lack of exercise, the damage caused is greater because there is more pressure on the stomach.

Due to such factors, the cells can’t digest the food properly, allowing it to stay longer in the stomach and reflux back to cause heartburns.

In this case, antioxidants containing foods fight with the free radicals generated and control the damage.

Dimerumic acid from red rice yeast works similarly to protect and increase the life and efficacy of the gut cells so that the food is digested properly and there is a less chance of acid reflux.

Red rice yeast fortified by the benefits of Monascus fungi acts as a fungal microbial growth promoting agent and increases the bioavailability of nutrients.

It acts on the stomach and guts overall on several levels such as releasing free amino acids and vitamins from the food item so that the food is easily digestible and the nutrients are properly absorbed without being defeated.

Red rice yeast is safe for consumption by mouth for up to three months; however, longer consumption effects have not been studied.

It is not advisable for people younger than 20 years. In traditional Chinese medicine, the dosage of red rice east can range as high as 6000-9000mg per day.

The right dose of adults may be different depending upon the source and the quality of supplement but most studies prescribe an average use of 600 mg 2 to 4 times per day.

Though not much research has been done on this, red rice yeast has been shown to cause birth defects in animals and so it should not be taken during pregnancy.

People with kidney problems, thyroid problems, and cancer risks should not consume it or take it only when prescribed by a medical practitioner.

It is also not advisable to consume it for the people with liver ailments, the reason being it contains naturally found statins which are similar to anticholesterolemic drug levostatin. Levostatin is strictly prohibited to take in case the patient has liver problems.

There are certain medicines or food items with which red rice yeast should not be combined. One of these is alcohol.

Alcohol damages the liver and red rice yeast could exacerbate the effect of alcohol.

Similarly, drugs like cyclosporine, niacin, and gemfibrozil affect the liver, so does red rice yeast.

The combined effect may be harmful to the body and thus should be avoided.

Fruits such as grapes or medicines of similar nature, that decrease the breakdown of yeast in the liver should be avoided to be taken along with red rice yeast as it might increase the retention time of the yeast in the body.

There are several other medications that have been shown to prose adverse effects when taken along with red rice yeast and thus should be consulted with a doctor before consumption.

It is important to keep a strictly prescribed dosage of the supplement and follow all medical instructions because the yeast might pose problems if reacted or retained in the body for a longer time.

Side Effects of red rice yeast

Monascus rice has not been shown to pose any problems if taken with care, following all the precautionary measures mentioned above.

However, unlimited consumption can cause a headache, dizziness, vomiting, stomach infection and muscle weakness.

Off limits, consumption can exacerbate gas, bloating and heartburn instead of curing it so it should only be taken in prescribed amounts

Red rice yeast can also act as an allergen and the muscle weakness can lead to a severe form known as rhabdomyolysis, in which case, the consumption should be stopped immediately and medical attention should be provided.

Red rice yeast is an effective traditional dietary supplement and medicine, which if taken in moderate or prescribed amounts it may help in diseases like hypertension and heartburns by virtue of its antioxidant, anti-inflammatory and probiotic effects.

It can, however, pose problems if taken in combination with certain foods or medicines or in case of liver and kidney problems.

Its consumption and dosage should thus be carefully discussed with a dietician and a medical practitioner before use.

READ THIS NEXT -
Bromelain and Heartburn - Does it Help?
What are Causes of Heartburn?
5 Reasons Why Banana is Your Friend in Heartburn
How Angelica Roots Can Help in Heartburn

Why Green Leafy Vegetables Are Great for Heartburn
5 Ways Artichoke May Help in Heartburn
List of Medications That Can Promote Heartburn
Electroacupuncture for Heartburn - Does it Help?