Black pepper is one of the most common spices used worldwide.

It is a dried fruit obtained from the plant Piper nigrum belonging to the Piperaceae family. It is used to impart flavor and aroma to food.

Besides, it is used as a medicine traditionally since ages.

Vietnam is the world’s leading producer of black pepper followed by India and Brazil.

Besides, black pepper is an excellent carminative, diaphoretic, diuretic, antioxidant and antibacterial agent.

Let’s have a look at the constituents present in black pepper that makes it a superfood.

Besides, considerable amounts of vitamins A, C and K are present.

But, the major constituent that imparts flavor, pungency and a health aspect to black pepper is piperine.

Why Black Pepper Can Help in Weight Loss and management

With lifestyle diseases being the prominent cause of concern today, scientists have explored the potential benefits of black pepper to curb these diseases.

Let’s have a look at how black pepper helps in weight and weight-related disorders. 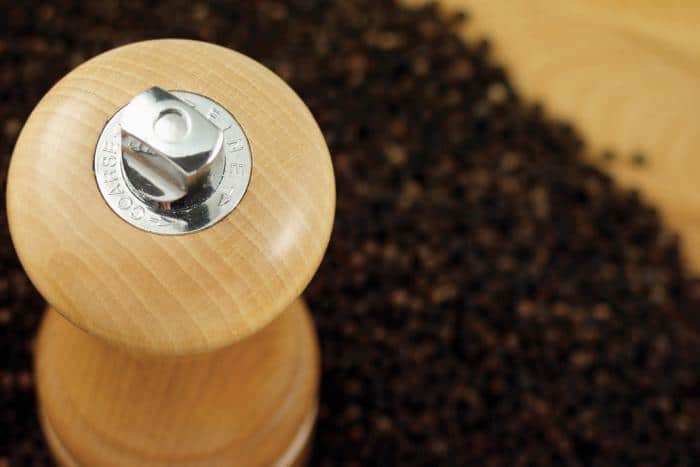 A study conducted in the Department of Biochemistry, Annamalai University, India demonstrated a remarkable reduction in total free fatty acids, phospholipids, triglycerides and cholesterol levels in the plasma and lipid profiles of groups treated with black pepper.

Besides, black pepper elevated the concentrations of HDL (good) cholesterol.

Thus, dietary black pepper was found to be highly beneficial in reducing total fat content in the body through its hypolipidemic and antiatherogenic effects.

This piperine has a significant anti-obesity activity.

A study carried out in the University of Shizuoka, Japan investigated the suppression of the body fat accumulation in mice due piperine intake.

After 4 weeks, results indicated that black pepper significantly reduces body fat accumulation because of the piperine content in it.

A study conducted in Sejong University, Korea investigated the anti-adipogenic activity of black pepper and its major constituent piperine.

The study demonstrated that piperine present in black pepper slows down the fat cell differentiation by down regulating the activity of transcription factor PPARy and suppressing its activity too.

Black pepper can indeed do wonders in your anti obesity regime.

What it means? Scientific studies have proved that black pepper prevents fat pile up in the body, thus inducing anti-adiposity effects.

A review conducted on Indian spices showed that black pepper is found to influence lipid metabolism.

It does so predominantly by fatty acid mobilization.

Black pepper is a thermogenic food. Thermogenic foods help to speed up metabolism and increase calorie expenditure by stimulating the production of heat in the body (Thermogenesis).

Black pepper has a significant impact on the body’s metabolism rate, satiety and fat oxidation because of its thermogenic properties.

A review carried out on the metabolic effects of spices showed that black pepper through its thermogenic properties enhances lipid metabolism, satiety and fat oxidation.

This property of black pepper can do wonders in promoting weight loss.

What it means? Black pepper is a thermogenic food. As a result, it speeds up metabolism rate, burns calories quickly and thus promotes weight loss.

Oxidative stress is an imbalance in the production of reactive oxygen species (free radicals) and body’s ability to counteract the harmful effects through their neutralization.

How to incorporate black pepper into your diet?

It is essential to add black pepper at the end of the cooking process because it loses its aroma and flavor on prolonged cooking. Some tips:

Black pepper is one of the most common spices used in the world. It is rather known for its aroma and flavor than for its health benefits.

It prevents accumulation of fats, oxidative stress, slows down the process of new fat cell formation and stimulates energy expenditure.

READ THIS NEXT -
BUSTED: Starving Myself Is The Best Way To Lose Weight
7 Reasons Why Dairy Products Are Good For Weight Loss
Vitamin for Weight Loss - Truth Revealed
Green Tea for Acne : Can It Help?